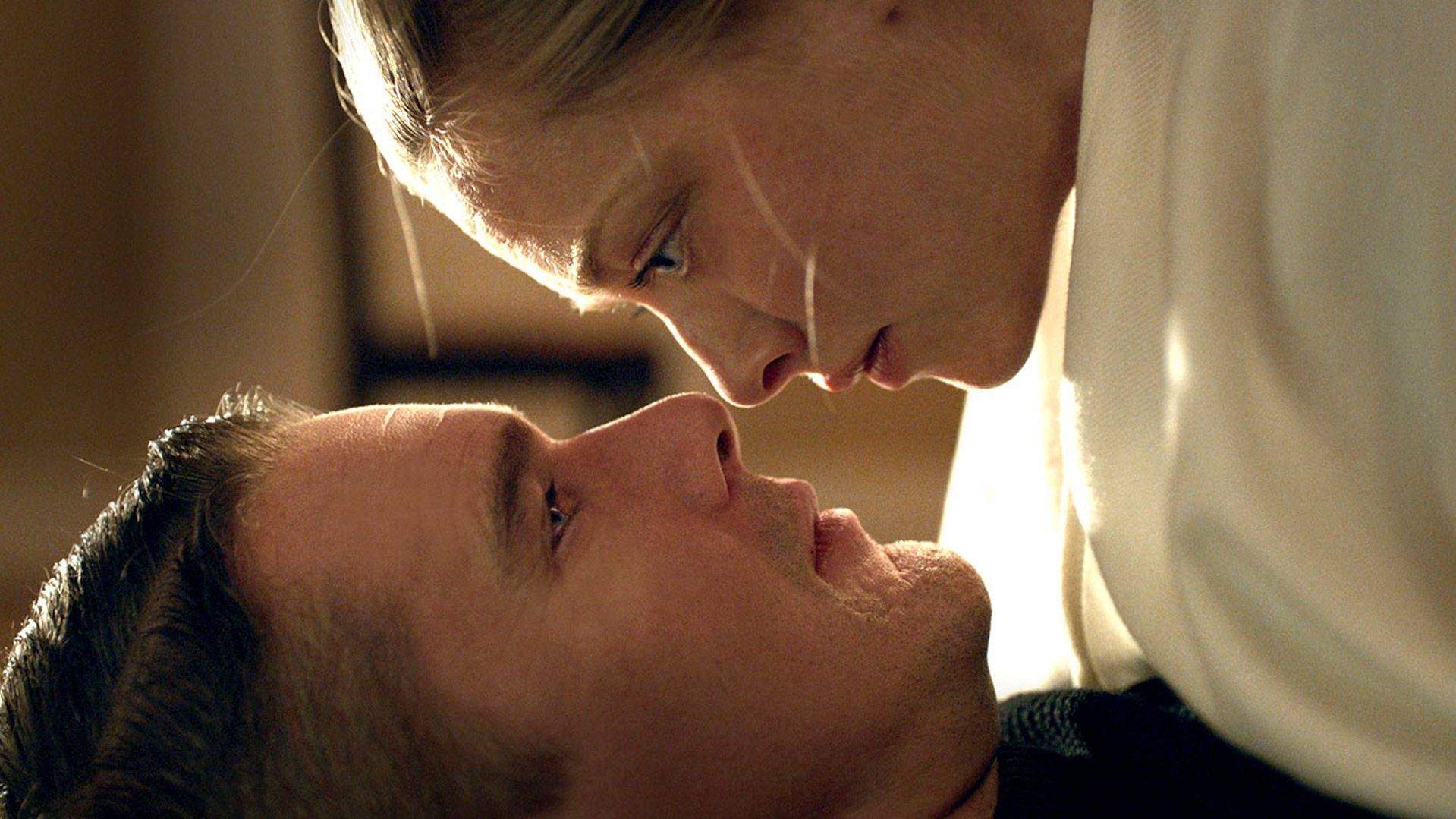 Watching a great moment in film is often at once a delight and nerve-racking. You recognize the greatness of a scene or moment instantly, but cannot help thinking it may yet be undone by a badly chosen twist. There is a moment in Paul Schrader’s First Reformed (2017) that lingers for minutes on this delicate balance. Yes, the bad twist did follow. Or so I thought.

The particular scene starts as one of the most moving and intimate moments I have seen in film this year. Toller (Ethan Hawke) and Mary (Amanda Seyfried) play a ‘game’ in which they cover each other with their body. Both are clothed, and their relationship until then was strictly formal. So you wonder how to judge this moment, that feels at once spiritual and erotic. Just as the tension builds, levitation kicks in: the pair is seen ‘flying’ over a variety of landscapes. It is a visualisation of Toller’s turn to the ideals of climate protection. I felt disappointed at this twist. Whereas the game between Toller and Mary could be believed, this levitation was certainly stretching things too far. It was only when I gave things a second thought afterwards, that this scene seemed to make some sense to me. Paul Schrader’s own theory on Transcendental Style proved to be helpful.

Before Paul Schrader became the notorious screenplay writer of films such as Taxi Driver (1976) and Raging Bull (1980) and director of Hardcore (1979), American Gigolo (1980) and Mishima: A Life in Four Chapters (1985), he wrote the extensive essay Transcendental Style in Film. To explain this theory, he gave in depth analysis of films by Ozu, Bresson and Dreyer. These directors were in his opinion the most consistent practitioners of a so called transcendental style. First Reformed could be Schrader’s own take on this complex style.

Schrader summarizes the goal of the transcendental style thus: “Transcendental expression in religion and art attempts to bring man as close to the ineffable, invisible and unknowable as words, images and ideas can take him.” And: “The proper function of transcendental art is (…), to express the Holy itself.” In thus classified films, this expression is often a powerful moment in which the hero completely identifies with his passion. This passion is often religious, but not necessarily, and is only found after a long struggle with everyday life. This ‘everyday life’ is an important term in Schrader’s theory. Films are structured in a similar way: at first, the hero is in tune with everyday life. Then he senses an alienation with everyday life; the world stays the same, but the hero no longer feels connected to it. The resulting struggle reveals itself to be of a spiritual density, and leads to a final decisive action, which asks for commitment of the hero.

Of course, this commitment has also to be made by the viewer, in order to experience this expression of the Holy. It is therefore important that the style supports this experience. In Schrader’s opinion, directors like Ozu, Bresson and Dreyer did this by using a very impersonal style. Any kind of realism, psychology and expressionism is avoided. Clues that usually help the viewer understand the film, such as plot, acting, camerawork, music and editing, are non-expressive. This results in a repetitious cinematic style that supports the ritual of transcendence.

First Reformed follows this structure closely. At first, Toller seems to be quite well in harmony with everyday life. His church no longer attracts crowds of people, but Toller is still confidently living his role as a minister. When Mary asks him to help her depressed husband Michael, he might actually believe he can save him, or at least sincerely act according to these expectations. We learn about Toller’s sufferings, the loss of his son and the resulting divorce.

Toller discovers Michael’s concerns about climate change and the resulting despair, especially concerning the question whether to give birth to a child on a yet doomed planet. Michael’s despair eventually would lead him to a suicide bomb attack, but Mary discovers his plans. He shoots himself shortly afterwards. Toller’s inadequacy to help Michael leads to a crisis, i.e. an alienation with everyday life. He studies Michael’s research on the subject of climate change. His environment notices his change in behaviour, his tendency to isolation. There are concerns about his health and his ability to lead an important event. To this point, his contacts with people, especially with Mary, have been mostly of a formal quality. It seems Toller’s own identity and ability to create authentic bonds with people, is drowned by his distancing professionalism as a minister. A professionalism that might be self-chosen, to escape from his sufferings and avoid new ones.

At this point in the film, the scene I spoke of in the introduction occurs. In terms of transcendental style, this could be the moment of the ‘final decisive action’, the moment of transcendence. It involves only Mary, Toller and an empty room. When Mary proposes to the ‘game’, the suspense lies in the question whether Toller is capable to finally commit to a genuine intimate bond. This part of the scene really feels like the spiritual experience that fits within the transcendental style. It seems like the moment in the film in which the hero finally commits to his passion. This is supported by the cinematic style, which is very modest and lets the energy of the scene speak for itself.

Then, the scene makes a twist, showing the couple on a background of landscapes, hinting on commitment from Toller to the climate change agenda. This part of the scene seems like a visual display, a fantasy, which is very unlike transcendental style. Even the moments of transcendence in the films of, for example, Bresson are visually very unspectacular. This is because in transcendental style images are not supposed to attract attention on itself and remain close to a depiction of everyday life as we know it.

After this moment, Toller seems to have found a new purpose in life, which, as it turns out later, is to plan a suicide bomb attack at the church event. A moment of considerable weight in this part of the film is his farewell to Mary. He warns her not to come to the church event he will lead. The implication being that she is the only person he cares enough about to involve in this horror. In retrospect, there could be an unspoken dialogue going on at the same time. A nonverbal dialogue in which he lets her know that he actually wants her to visit the event, in order to save him from performing his terrorist act. A signal that can only be understood through the genuine bond that sprang to life in the intimate moment they shared just before.

In the film’s climax, this is exactly what happens. While he is adjusting his bomb vest, Toller sees Mary entering the church. He cancels his plans, and wraps himself in barbed wire. This act reminds us of penance, in which thorns and the like are involved. A penance because of the wrong path followed, as Toller must now see clearly. In the room that could be the same as of their earlier moment of intimacy, Mary and Toller embrace each other, in a moment that feels like an enormous relief. After the ‘false’ moment of transcendence, this could be the real one. His passion was never an attack that should help, in a wicked way, climate change ideals. His passion was never his ministry, as it kept him from sincere relations with people. In this scene, we learn that his passion was Mary, or in a more abstract way: humanity.

This final scene shows similarity with some of the films of Robert Bresson, especially Pickpocket (1959). Before I proceed to these parallels, it is worth noticing that Schrader’s depiction of everyday life reminds one of Bresson’s films as well. They both use recurring shots of written text that are at the same time read by the narrator. This can be seen many times in First Reformed, as Toller keeps a diary in which he tries to be as honest as possible. Schrader calls this ‘doubling’ and witnesses in Bresson’s films even occasions of ‘tripling’: an event is written about, is narrated and then seen happening. He interprets this as an overemphasizing of the every day, a means to get the viewer ‘beyond simple day-to-day realism and into the peculiar realism of Robert Bresson’.

Schrader pointed out that films of Bresson often ended with a strong symbol after the moment of transcendence: a charred stake (The Trial of Joan of Arc), an empty street (A Man Escaped), a cross (Diary of a Country Priest), prison bars (Pickpocket). The strong symbol of the scene in First Reformed is the barbed wire, as it indicates the insight Toller has finally gained of his faulty ways and now the right path. The conclusion of First Reformed is mostly in line with that of Bresson’s Pickpocket. In this film’s final scene the hero is imprisoned, but finally kisses the woman that cared for him. What Schrader stated about this scene could almost exactly be said of First Reformed:

“It is a “miraculous” event: the expression of love by an unfeeling man within an unfeeling environment, the transference of his passion from pickpocketing to Jeanne. ”

Schrader notes that it could be possible that Michel in Pickpocket has willingly let himself be captured (in order to make way for the ‘miraculous event’).

Could Toller have done the same, by expressing his wish non verbally to Mary to attend the event? Thus arranging his ‘miraculous event’?

This Essay article was published in December 2018