Monsieur Klein: I am not the Other 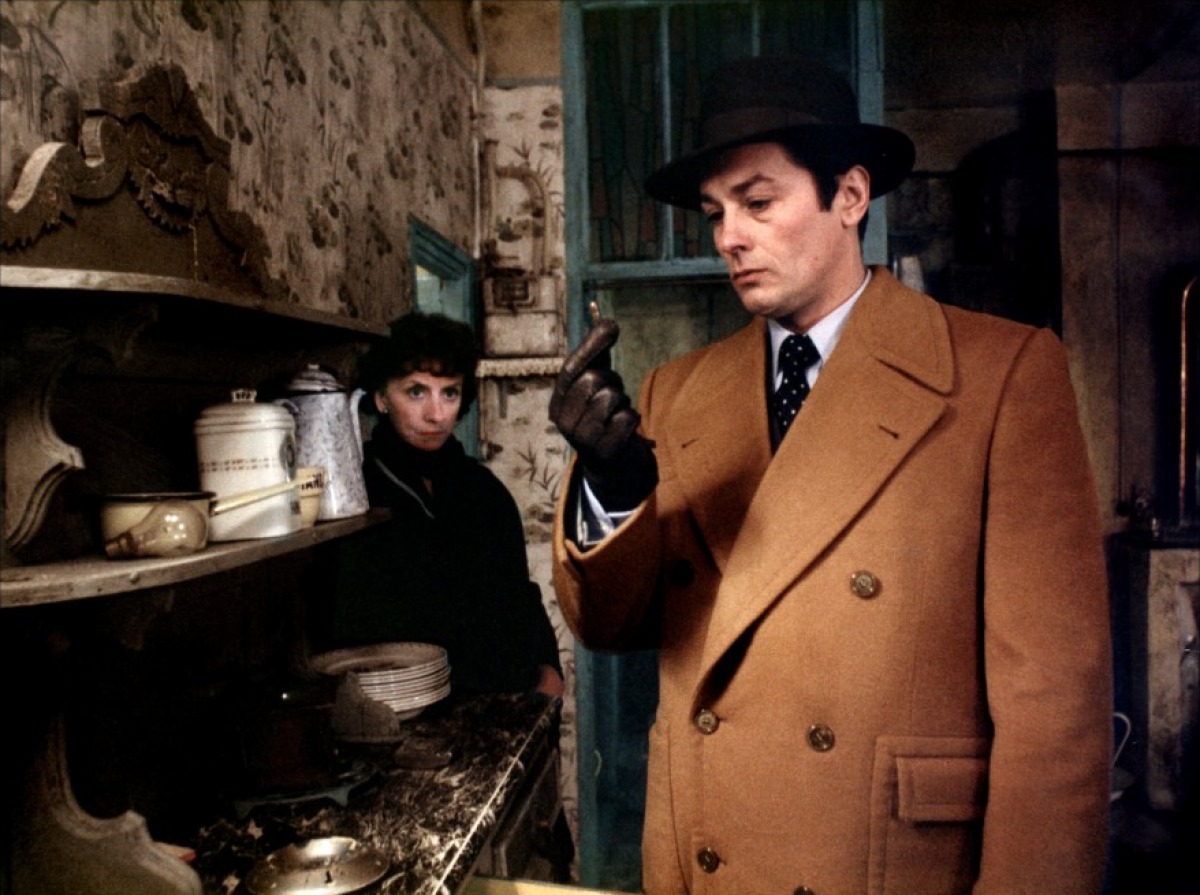 Watching Joseph Losey’s somewhat forgotten Monsieur Klein (1976) in these troubled times can be revealing and shockingly confrontational. Before I delve into Losey’s eerie examination of guilt, collaboration, and identity; some poignant words come to mind. In 1989, the literary critic, George Steiner, was interviewed for Wim Kayzer’s ambitious Dutch television essay Nauwgezet en Wanhopig. Something he said always stuck to me:

“I think there are no more illusions. The illusion of assimilation is over except if you’re an idiot. If you’re an idiot you think you can change your name, make a mixed marriage. The Nazi’s came to you three generations back and knew all your names and so did the KGB and the NKVD (…) And if you have to be on that unimaginable train which takes you to the end which Jorge Semprun has written about so wonderfully. There is something even worse than being in the train. It is being in the train and saying: ‘I don’t understand! They’ve got the wrong person! I was baptised I have a wonderful Aryan wife and I’m called Smith (…)’ That is even worse! If you can imagine something worse than absolute worse that’s even worse.” 1

As George Steiner so powerfully states in the interview excerpt above, one of the most terrible feelings is that of being wrongfully accused when you are convinced of your apparent normality and innocence. But what does it mean to fit in? To be a part of ‘normal’ society and not be considered the Other?

Steiner’s example deals with a particular historical context as he refers to the Nazis, the KGB, and its percusor the NKVD. In the 20th century, the idea of being normal, of belonging to a people, a race or a nation was paramount to survival or death. But in reality, these identities proved complex, elusive, and not so clear-cut even to the many victims that were slaughtered because of their supposed shared otherness.

Take the words of Benjamin Murmelstein for example. Murmelstein was an Austrian rabbi who headed several Jewish councils (Judenrat) that were forced to cooperate with the Nazis. In that role, he worked closely with Adolf Eichmann and witnessed his cruel methods:

1.The quotations can be found in the book Murmelstein wrote about his time in the “model” camp Theresienstadt. He was also the subject of Claude Lanzmann’s painful and complex documentary The Last of the Unjust (2013). Both are dealt with in Mark Lilla’s essay for The New York Review of Books that was used as a source.
“This is how Eichmann’s experiment developed and was prepared according to a detailed recipe: throw together Jews from different places and with different languages, add a dash of those who were never really Jewish, and bring the whole thing to a boil over a slow flame; strain, making some pass through every once in a while. The rest end up in the oven.” 1

This terrible situation kept the Jews at each other’s throats rather than the guards’, exploiting feelings of identity that ran counter to their shared fate of being exterminated. In another cruel example, Murmelstein describes a sick inmate in a camp who refused care from an Eastern European doctor who visited her. “Excuse me,” she said, “but I’m a German woman who cannot be examined by a Jewish doctor.”

The Nazis of course didn’t make any exceptions once you were deemed a member of the inferior race. It was that part of identity that was seen as overriding and therefore duly codified in strict racial laws that superseded citizenship or even the fact that people were non-practising or assimilated Jews. Three generations was all it took even if you felt more German than Jewish.

The whole idea of belonging to something becomes problematic if one looks at what happened during the holocaust. In the end identity is a construction that can be manipulated individually or collectively. This idea is the central theme of Joseph Losey’s Monsieur Klein. Identity is a shifting concept and to define it can have fatal consequences. It’s a film about a specific historical event but its surreal style also delves deeper and questions how vulnerable and changeable our identities can be. It also shows us how identities are shaped, by arbitrary laws, entrenched prejudices but also our indifference to the fate of others. The film intelligently deals with the complacency of the occupied European countries and their problematic role within the systematic extermination of the Jews.

Monsieur Klein opens with images of a naked Jewish woman being examined by an indifferent and curt French doctor. He coolly states her physical features to a nurse who is recording the examination. With each statement, he mentions the probability the feature has of defining her Jewishness. The woman is clearly distressed by the uncomfortable way in which the doctor treats her but she seems to undergo the whole ordeal with a certain estranged detachment. Afterwards she pays the doctor for their examination as it is an obligatory check-up that she is forced to undergo. We don’t see her again and the focus suddenly shifts to another character.

Robert Klein is a successful art dealer living a carefree and leisurely life in Paris. We first catch a glimpse of him checking some new merchandise: a painting by a Dutch master that a Jewish man wants to sell off. As this is 1942, the Jew is at the mercy of Klein’s price. Haggling is useless and the desperate seller needs the money as all his possessions are quickly being confiscated. But just as the man leaves Klein’s apartment, we see a newspaper lying in front of his door. It is a periodical meant for French Jews that informs them of their obligations. Klein is shocked and tells him that this must be a joke. The Jewish man is not amused, as he knows his predicament is no laughing matter.

This incident sets in motion a series of confrontations between Klein and an apparent double who has framed him. But this isn’t a straightforward blackmail movie where our hero tries to outsmart a criminal. During Klein’s search for the elusive other Klein we come to discover how intangible his identity really is.

The casting of Alain Delon as Klein brings a deeper layer of meaning to the film. His cool and detached manner goes back to other films that play with the elusiveness of identity. That theme also haunts René Clement’s Plein Soleil (1960) that was based on Patricia Highsmith’s novel The Talented Mr. Ripley (1955). A story about how easy it is to change identities and take over someone’s life. Klein also has something of the spectre-like quality of Jeff Costello in Jean-Pierre Melville’s Le Samouraï (1967.) It is a very uncanny and subtle performance by Delon that works through empty glances and restrained motions. His cool glassy eyes already seem to mark him out as a ghost as he drifts through Paris looking for clues whilst other people mistake him for that other Jewish Mr. Klein.

In the end, the quest isn’t resolved in a satisfactory manner but that’s not the point of Losey’s film. Its theme is closer to Steiners and Murmelsteins words that echo uncomfortably in a conversation that Klein has with his father. Investigating his past, he wants to know where his family comes from. His father bursts out with the affirmation: “We’ve been French and Catholic since Louis XIV!” Implying that there might be some other impure blood in the family before that. So in his quest he is gradually forced to question his own murky background whilst the authorities are busy planning to round up all the Jews.

Slowly Klein seems to accept this otherness and the uncertain faith that comes with it. This is hinted at in a remarkable and dreamlike scene later in the movie. Klein is looking for distraction and goes to a cabaret show in a fancy club. A transvestite sings a forlorn song whilst a clown-like figure with exaggerated Jewish features moves about. The crowd of German soldiers and posh French people laugh. It is a weird spectacle even more so if we look at Klein who seems estranged and distraught but has to hide his emotions for the people around him. What is he at that moment? Already branded as the other but still being able to hide in plain sight and witnessing the growing hostility towards the Jews in France.

In Losey’s filmography this is a restrained production although he can be seen as an eclectic director. Compare this with the extravagance of Boom (1968) and it is hard to see a link. It has more kinship with The Servant (1963) which also deals with the breaking down of identity. But the most impressive feat of Monsieur Klein is that it is very much its own film.

The most haunting scenes are those that foreshadow the deportations and that are accompanied by an impressionistic and minimal score. They pop up throughout the movie as a contrast to Klein’s doomed search, suggesting that unbeknownst to all the Jews the dye already has been cast. In one scene, we see a group of gentleman sitting down at a table. The map of Paris looming in the background, and then silence. Later we see clerks rummaging through filing cabinets and getting all the necessary documents in order. French gendarmes drive around the city and time their movements. A dress rehearsal for the big round-up that eventually took place on the 16th of July 1942. On that day, some 12,800 men, women, and children were arrested by French policemen and packed into an indoor sports arena in conditions of unspeakable squalor, without water or toilets. From there they were sent to a transit camp in Drancy and eventually to extermination camps in the east.

It is that terrible event that the movie leads up to even though it seems like a side note to Klein’s search for his blackmailer. The Vel’ d’Hiv roundup was recently the subject of two French films: Rose Bosch’s la Rafle (2010) and Tatiana de Rosnay’s Elle s’appelait Sarah (2010). They both treat the event in a fairly conventional manner focusing on heroic characters amid the terrible circumstances. They also show the complicity of the French in deporting the Jews. A painful issue that still seems to be a big taboo in France where the image of a nation of resistance fighters seems to persist. The not so heroic truth was that French officials were happy to help the Germans with the deportations and in some cases surprised them with their thoroughness.

In my opinion Monsieur Klein’s depiction of that horrible event is all the more powerful because it ends with it whilst subtly referring to it throughout the film. The deportation becomes the conclusion of a story that delves in the complexities of identity. It can be a tool for an oppressive regime to play with. Your identity being reduced to nothing more than a stamp on a document. Just a small step from being a French citizen at one point to lining up for the gas chambers the next.

In a time when so many seem to retreat in their bastions of identity this film shows the power of empathy in placing the viewer in a position of shifting identities. It has a similar effect as the famous poem by Martin Niemöller that starts with the words ‘First they came for the Socialists, and I did not speak out—Because I was not a Socialist.’ and ends with: ‘Then they came for me—and there was no one left to speak for me.’ In circumstances where people are found guilty of being ‘The Other’ we can only reply with the statement that we are all guilty of being human.