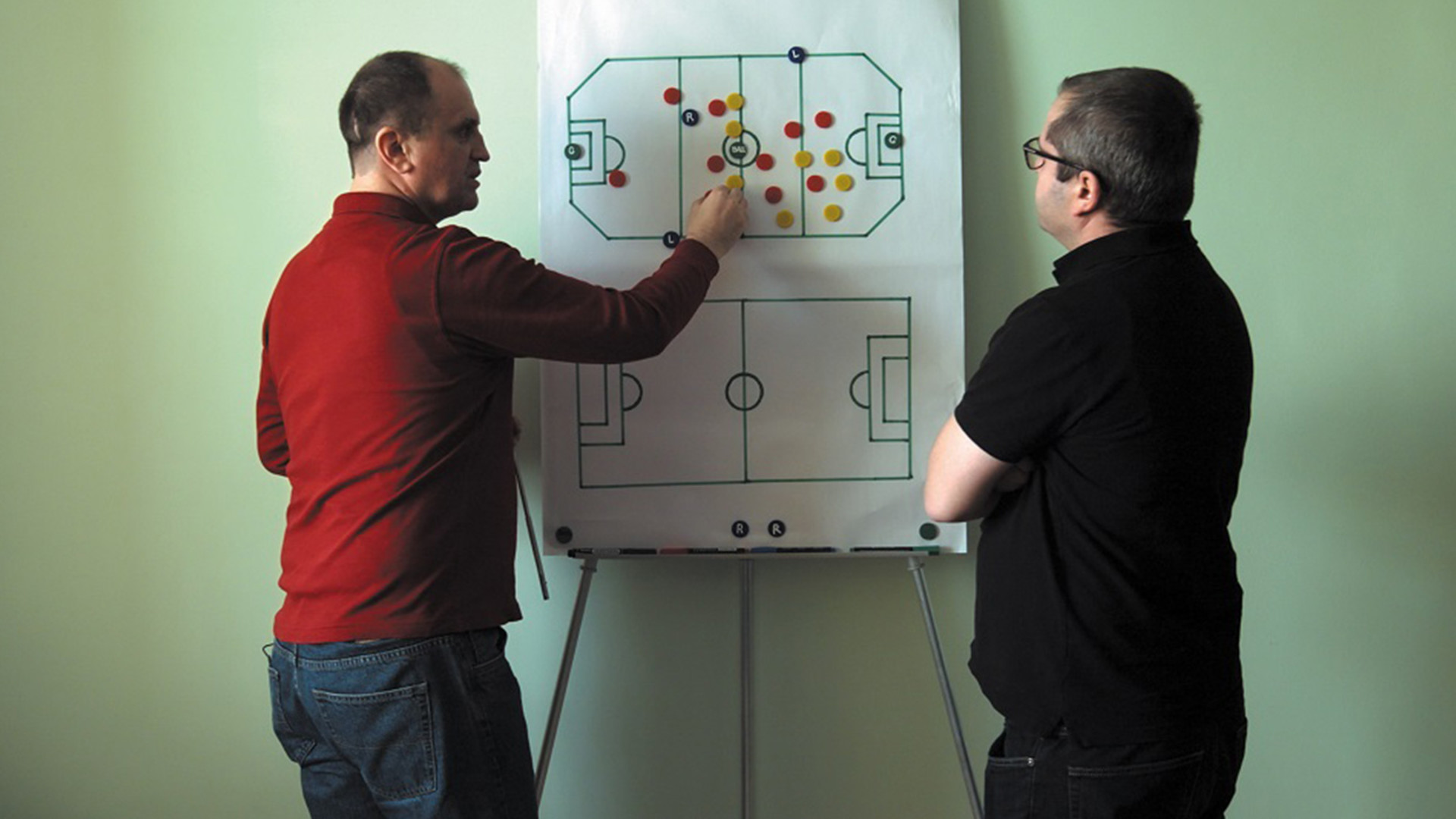 Corneliu Porumboiu, the Romanian director whose fiction films include Police, Adjective, and The Treasure, is an artist with an extraordinary talent for writing and bringing new ideas to the viewer. His films have made me think about my own body, and words, and politics, and history, in new and different ways. Fans of the director would probably agree that sometimes, watching his films feels transcendental.

But the first time I met Porumboiu, we talked about rugby. I mentioned that I hailed from a Commonwealth country which is particularly known for the sport and we chatted amicably about scores, matches, and things I pretended to know about so I could converse with this genius. I was surprised but strangely flattered to be discussing seemingly trivial matters with such a great poet.

Porumboiu’s latest film, Infinite Football, is about – you guessed it – football. Another of my favourite poets has written passionately about sport. Louis MacNeice dedicated an ode to the newspaper’s sports page in his collection “The Burning Perch”, published in the 1960s. The first line of this poem, “Sports Page” scans “nostalgia, incantation, escape“. Snatches of the poem kept coming back to me while watching this documentary, as both bring to light the way we define ourselves through spectatorship of other people’s play.

This is Porumboiu’s second documentary to deal with football. The first, The Second Game screened at the Berlinale in 2014. It replays in real-time an original television screening of a football match from late 1980’s Romania. The voice-over is a more recent recorded conversation between Porumboiu and his father, who happened to have been the referee of the match. Scattered throughout this experiment in sound and image are cultural and historical references which bring the film to life, despite the discrepancy in time. The director has an uncanny ability to bring together the past and the filmed present, adding small dashes of brilliance.  While Porumboiu’s fiction films often make us think about film itself, the documentaries make us think twice about time. In the end, an obsession with time is another way to remind the spectator of the difference between film and reality. The game serves as a reminder that we too are playing, whether or not we want to. In Infinite Football, Porumboiu concentrates on a childhood friend, Laurențiu Ginghină, who has invented new rules for football. He was wounded as a youth during a game in which too many players trying to take the ball created a dangerous mash-up of bodies. With his leg and pride still hurting after all these years, he has become obsessed with spreading the players evenly throughout the pitch, believing that his way of playing football will lead not only to a more peaceful contest, but ultimately to a better society.

In one scene, Laurențiu reenacts what happened when he went to work in the factory after his injury. He describes the weather and the atmosphere on that day in the 1970’s: how his leg was aching, how no one offered him a ride home, how he was obliged to return alone, on a snowy New Year’s Eve. He offers to reenact for the camera the journey from the door of the factory out into the street. He walks slowly, dragging his injured leg at every step. Bringing the past into the filmed present, he shows how he walked while explaining what happened to him. This bizarre mise en scene seems to show time itself in its nakedness. The camera focuses on the protagonist, concentrating on his memories. Then it retracts and the scene changes without warning, suddenly pulling the spectator away from this double memory.

Laurențiu’s reels us into his project despite all its absurdity. When he talks, we understand how this wound has damaged his view of himself, his masculinity, his self-worth. Rather as when one of our favourite sportspeople misses an easy goal, we are suspended between incredulity and pity. Laurențiu’s father is also interviewed. He strays away from his son’s football plans and talks about his own ideas of success, adding layers of meaning about class, wealth, talent and ambition.

As in a real match, there are moments which take us away from the main subject. In a football match, this could be halftime, time-out, or downtime – times when we’re waiting for the action to take place. In this film, it’s interactions with locals in Laurențiu’s office. As an old lady discusses land that was taken away during communism, administration is slowly put into action. Porumboiu puts himself onscreen for the first time, as if to get a little bit closer to this game himself. Surely that’s because he knows, as many great sports fans know, that spectators need a doppelgänger to relate to. As touching as the character of Laurențiu is, we need to feel that our doppelgänger is also a spectator, because here we are too aware of the futility of this particular game.

Louis MacNeice describes sports players as our doubles:
“Yet our Doppelganger rides once more
Over the five-barred gates and flames
In metaphors filched from magic and music”

Laurențiu is captured in his office, wearing a suit, dealing with the administrative tasks he seems to hate. Somehow, Porumboiu draws him into talking about a life he has imagined for himself. He has travelled around the world, and he has read comic books about superheroes who lead double lives, Batman and Spiderman with their day-jobs, who save the world at night. He sees himself as such a figure: office-worker by day and revolutionary in the world of competitive football at night. Our doppelgängers are more powerful images of ourselves. That is why we wish to be like them. He thus leads a double life while waiting for his second chance. This theme of multiplication can be found both linguistically and metaphorically in Porumboiu’s films: redoubling, doubling up, accumulating. The title of the first football documentary, The Second Game, toys with the spectator. If it is the second game for the two commentators, which game is it for us as spectators watching what has already been watched – three, four, five times? Seconds too, take us further from moments in history. This leads us to the title of the latest documentary, Infinite Football.

A beautiful loser living in a dream, Laurențiu is a wonderful anti-hero for a film about football. He’s the opposite of the sleek, fit product that television and society would like to sell us as a doppelgänger. There is magic and nostalgia in sport. It makes us feel young again, able to control the ball with effortless-looking perfection, as if we have superpowers previously undiscovered. But capitalism can only take us so far. MacNeice reminds us cuttingly of the inevitable conclusion of this “game of life”:

The lines of print are always sidelines
And all our games funeral games.

Infinite Football is playing at MK2 Beaubourg in Paris and it probably won’t get a much wider distribution in France. Some of the screenings may collide with those of the Football World Cup in Russia and those who have to choose between the two might hesitate. No doubt, Porumboiu will be watching the games too. Maybe, after all, discussing sports is the best possible thing you can do with poets.