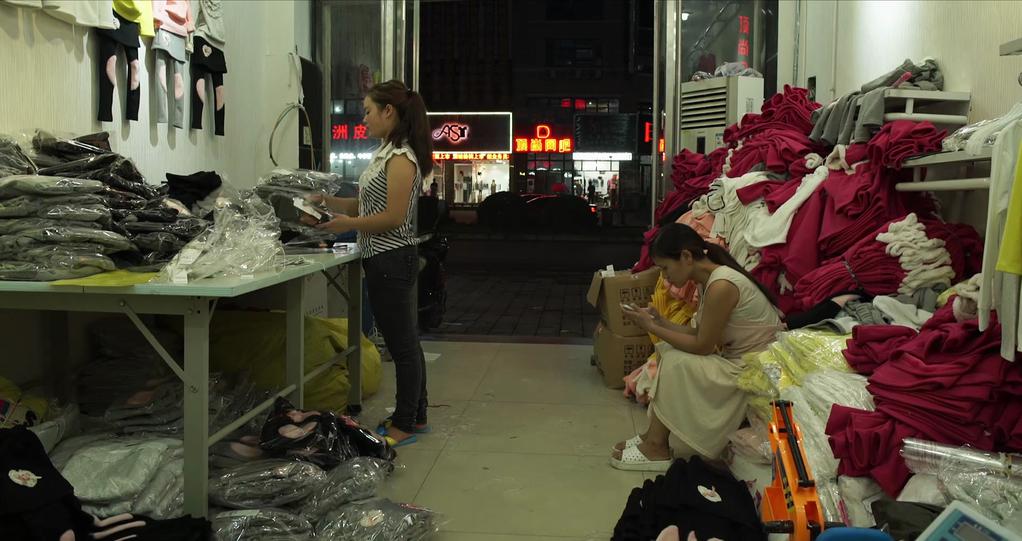 The 15-year old Xiao Min sits with her family in a dimly lit living room somewhere in the Yunnan province. She relays her plans to go work in Huzhou, a city two hours west of Shanghai with a booming garment industry. In hope of a better future, she sets foot on a bus, tries to sleep in an overcrowded train, to then arrive at her new home for the foreseeable future: a small room which she has to share with two strangers in a noisy and unkempt part of the city. The large modern factories of earlier conversations turn out to be workshops as small and cramped as the living quarters. And while the dust settles on Xiao Min, who’s now folding clothes for a living, we meet Ling Ling.

Wang’s films are made in the tradition of direct cinema, a movement of documentary filmmakers from the 1960s. Their desire for a new cinematic realism was answered by the advent of lightweight 16mm cameras. This new equipment allowed them to become virtually invisible on set, and to observe their subjects without interfering. Frederick Wiseman is one of the few still perpetuating this form, eschewing interviews in order for us to observe people in everyday communication. But while Wiseman’s protagonists are the institutions in which his subjects move, Wang’s protagonists are the people moving through the lack of an organized institution. With his small digital video camera in tow, he has unprecedented access to their lives, observing their being as if there were no camera in his hands. He simply becomes part of their lives. Ling Ling talking to her husband’s friend in Bitter Money

Ling Ling’s relationship with her husband has grown sour to the point of abuse. Abuse which Wang makes us witness. As soon as she enters their shop to ask for money he starts berating her in front of his customers. It’s an uncomfortable scene that quickly becomes harrowing as the husband gets physically angry with her. In between tears and beatings, she asks him why he’s behaving this way, as do his customers, who slowly start intervening after first leaving the scene. Corrupted by his relentless disappointment and the constant stress about money and lack thereof, the husband is unable to convey his true feelings, and turns to blame trivialities, taking it out on her.

West Of The Tracks (2003) basically laid the groundwork for most of Wang’s oeuvre. The film opens with a long take taken from the front of a train rolling through an industrial landscape covered in snow. Most of the factories we pass are already empty, as the Tiexi District in Shenyang has been on a slow decline for decades. Then, shortly after, Wang’s portable camera finds his subjects: Chinese workers living in dour living conditions and trying to make ends meet. These people are discarded by society, left to their own devices, surviving, all the while working at a job which will soon seize to exist. But as one of the workers note, they have no other choice. Xiao Min and her cousin in Bitter Money

Bitter Money‘s realization of futurelessness comes right after we arrive in Huzhou, about 30 minutes into the film, which Wang doesn’t let up for the rest of the duration. He shows us the magnitude of the issue by regularly having his eye follow different people who may or may not be working in the same workshop. Not that it matters, because it all looks the same: small, dimly-lit rooms, with too many beds, occupied by souls who’ve lost all hope but are unable to leave their monotonous existence.

A key film in understanding Wang’s approach, Crude Oil (2008) gives a sense of what it’s like to work on an oil field in the Gobi Desert by ‘trapping’ its audience in their seat for 14 hours, or a full workday for the oil field workers. Wang’s images never turn exploitative and they never objectify the subject matter. He tries to understand by observing. Wang’s camera captures the relentless hopelessness of the Chinese low-income working class, not for us to gawk at, but for us to experience, to become a part of it, and to maybe also understand it.

Bitter Money is currently available on VOD and DVD via Icarus Films.