Ordinary Heroes: Made in Hong Kong 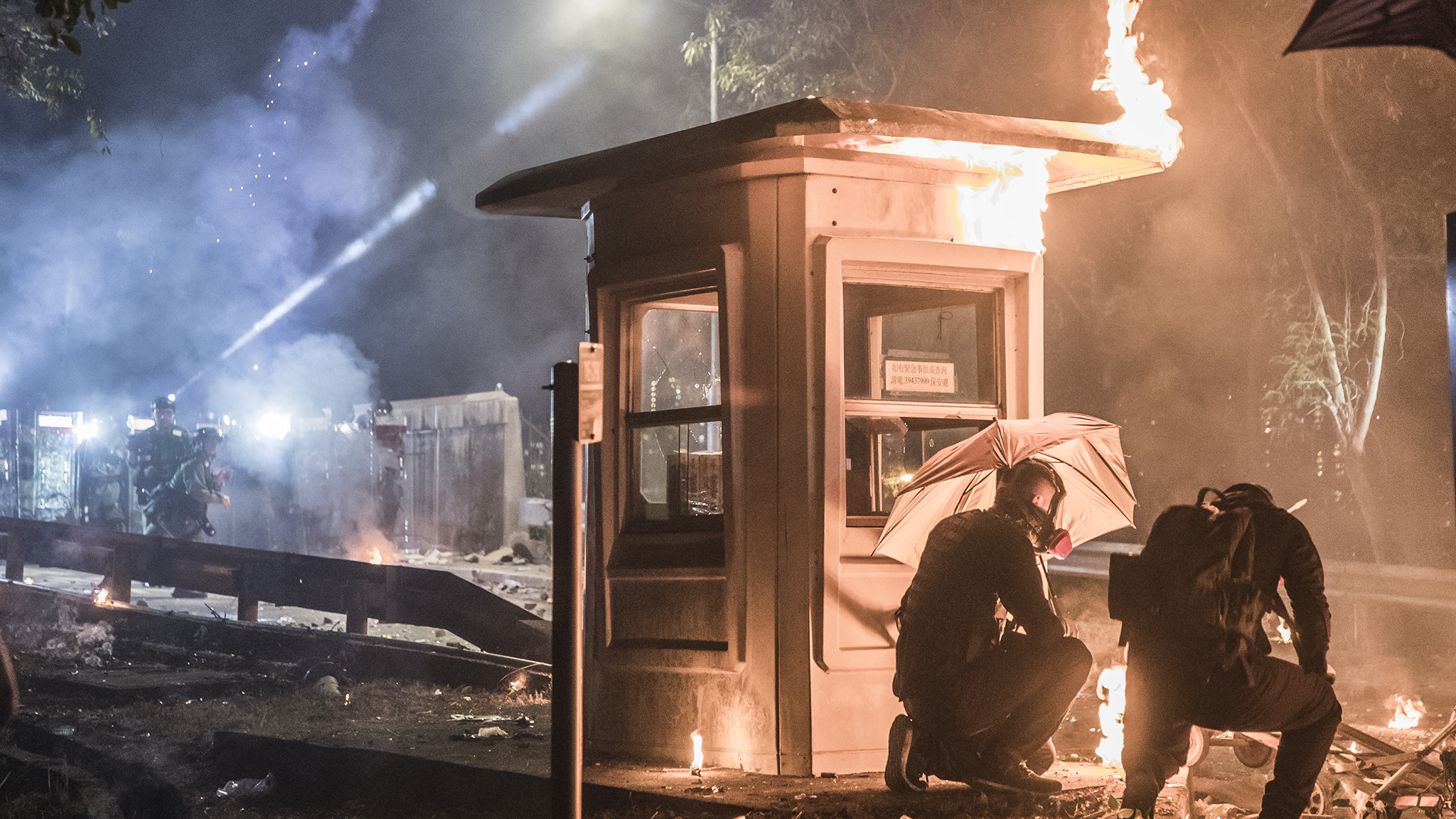 One of the most exciting sections of IFFR 2020 is called Ordinary Heroes: Made In Hong Kong. As the title indicates, the focus is on films from Hong Kong. Specifically, it’s a response to the past six months of protests for civil liberties in Hong Kong. Increasingly violent protests, that are not only a response to recent political events but also to over 20 years of slow erosion of the civil liberties and national identity of Hong Kong, after the United Kingdom handed Hong Kong over to (mainland) China in 1997.

To show solidarity with the protesters, and to showcase recent documentaries, shorts and fiction features on the protests and the current, spirit of the (young) people of Hong Kong. Completing this section are a number of older Hong Kong films, which reflect on that spirit in different times, completing a fascinating portrait of this unique city.

Documentaries From the Front Lines

Several of the recent documentaries focus on the 2014 Umbrella Movement. Chan Tze-woon’s Yellowing (2016), for instance, documented the protest from the ground, as a participant. Chan gives his fellow protesters a face and follows them as they set up a temporary cooperative community while they occupy a number of streets. They debate human rights, law, politics, life and hopes for their own and the city’s future. Their occupation lasts nearly two months, during which the community grew, as did their convictions in the face of police and government intimidation. Until real violence is used to disperse them. A testament to youthful spirit and righteous indignation.

Those come across even stronger in If We Burn (2020) by James Leong and Lynn Lee. This hot from the presses documentary had its world première at Rotterdam. It was shot mostly during the 1st of July protests in 2019, the day of the anniversary of the handover, and the day the then month-long ongoing protests erupted into something more. Footage live from the barricades shows the protesters forming into a new movement, once just concerned with the bill that would allow mainland China to extradite Hong Kong citizens, now a movement that wants a more democratic government which will hear its wishes and act on the behalf of Hong Kong citizens, instead of ignoring in favour of mainland interests and further erosion of civil liberties. It’s both an inspiring and moving document of young people working together spontaneously to achieve a common goal, to stand up to their oppressors and to protect each other. The facts that this was only the start of the movement and the real protests, that the bill was withdrawn but also 7000 people have been arrested since with no move towards more democracy, make the film both powerful and impressive, but bittersweet and heartbreaking.

Memories to Choke On, Drinks to Wash Them Down (2019) is, at first, quite a different film. Comprised of four segments, three fictional and one documentary, the film by Leung Ming-kai and Kate Reilly starts out as a gentle comedy. In ‘Forbidden City’, an Indonesian maid has to navigate the recurring memories of her charge, an old woman suffering from dementia. In ‘Toy Stories’, two young brothers reflect on their youth by looking at the toys of their mother’s toy shop. In ‘Yuen Yeung’, an American teacher learns about Hong Kong culture and history over meals with her local colleague. Towards the end of this short, the recent protests start seeping into the film, culminating in the final documentary segment. In which a young barista/actress decides to run in the hotly contested 2019 city elections, opposing a much older candidate who, like many pro-mainland China-politicians in Hong Kong, had run unopposed for the previous 12 years. Combined, these four short segments present a compelling, loving and yet concerned portrait of current daily life in Hong Kong.

The absolute highlight of the new features was Alan Lau’s The Cube Phantom (2019), a modern interpretative dance film. Lau is a documentarian originally, but felt enough documentaries were already being made about the current protests and wanted to makes something different In ten chapters, Lau films the history of the protest movement of Hong Kong through the dance choreography of Jordann de Santis, on striking locations, with beautiful cinematography by Wong Shek-keung and De Santis and wonderful music by Antony Cheng. You can read more on this in our Frameland Recommends article by Lisa van der Waal, also published in this February 2020 issue.

Shorts From the (Final?) Front Lines

The shorts programme accompanying these features featured fiction, animation even, visual essays and quite a few documentaries hot from the protest, some having their world première in Rotterdam. Including Last Night in Sham Shui Po, Home and a Distant Archive and the cream of the crop: Age of Valiant (2020) by Willis Ho and Lo Chun-yip. A portrait of the protesters in the front lines. At times it’s almost just a regular talking heads short, except these talking heads are all wearing dark sunglasses and gas masks, their uniform. They talk about battling the fully-equipped riot police with just cardboard, foam and umbrellas for protection against (rubber) bullets and tear gas, about how they see this as the final battle for Hong Kong’s future. Meanwhile, in the fictional What’s Next (2019) by Willis Wong Man-chak and established pro-Beijing politician wins the 2019 district election (also featured in Memories to Choke On, Drinks to Wash Them Down), prompting the youngest generation, in the form of a four-year-old, to ask the question: What’s next?

If the longer documentaries still gave hope, these shorts with their single focus are less hopeful and more like doom-laden battle cries. Some of which is reflected in the selection of older films programmed, which focus on some of the social issues and feelings of the young which led up to current events.

Before The Front Lines Were Drawn

Fruit Chan’s 1997 feature debut Made In Hong Kong feels just as prescient, potent and modern today as it did when it was made. No wonder its title makes up half the name of the section. Though it cannot be seen separate from the year it was made, the way the film’s firmly rooted in the events of 1997 only makes it more timely today. Made in Hong Kong takes place just before the 1997 handover of Hong Kong from The United Kingdom to China, which looms large over the doomed lives of the youthful protagonists. Their helpless anger over the failure of adults to give them options or real concern for their future or their desires mirrors the way the British and Chinese hashed out a deal without once including the people of Hong Kong itself. The conclusion is as heartbreaking as it is hopeless for the young of Hong Kong after the handover.

No such hope for the youngsters in Lawrence Lau’s Gangs (1988). The young people in this story feel just as much desperation and alienation as those of Made in Hong Kong or those in Yellowing or If We Burn. Hong Kong is still under British rule, but the handover has already been agreed upon in 1984. Either way, these young kids in gangs see no future for themselves in regular Hong Kong society, and they act out accordingly. They cannot really trust their elders, whether it’s parents that beat them, Triad members that exploit them or cops that lock them up. With nowhere to turn to, they turn on themselves, including fistfights, robbery, rape and murder. They might be criminals rather than protesters, but their anger and frustration over the lack of future they see for themselves in Hong Kong is very similar in this powerful crime drama.

Perhaps the bleakest film in the section, however, is Johnny Mak’s mesmerizing Long Arm of the Law (1984). A gang of mainlanders commits a bunch of crimes in Hong Kong, and sample capitalistic pleasures while hiding from the police, until they cannot hide anywhere any more. They are the bad guys, but also our protagonists who are fully humanised through their thoughts, hopes and desires for a better life. Made in 1984, the year the British and Chinese governments negotiated the 1997 handover, the relentless pursuit of the gang by the police might’ve been read as protection of Hong Kong against an invasion from the mainland. But in 2020 the scenes in which the police, in full tactical gear and with big shields, floods through the narrow streets of Kowloon Walled City to kill the gang by shooting first, plays very differently. Including what this does to the innocent bystanders who get shot in the crossfire between the police and the criminals, the violent police tactics come across almost as tyrannical overkill.

Equally criminal is the protagonist of Chang Cheh and Kuei Chih-hung’s 1973 action flick The Delinquent. A delightfully delirious film, but though it does slightly touch upon a generational divide and hopelessness of Hong Kong youth, it’s a bit of an oddity in the section. So is Ann Hui’s Ordinary Heroes (1999), but that is because it’s a rather lifeless, ineffective drama about protesters and social workers, which is odd and disappointing coming from the usually excellent Hui.

Far more effective if a bit overly melodramatic is Herman Yau’s From the Queen to the Chief Executive (2001). Despite adhering to Cantonese melodrama conventions, as a social critique, it still feels firmly based in reality. Based on a novel, Yau’s film takes up the case for a small group of prisoners. As teenagers, they were convicted of murder, rape and such serious crimes, but never sentenced. Instead, they were placed ‘in Her Majesty’s care’, most of them in the 1980s. With the handover in 1997 approaching, their dubious legal status has been mostly forgotten until a local city councillor takes up their case and tries to get them a fair sentence before China takes over and they might just be sentenced to death and executed. A fine social melodrama, including a relationship between one of the councillor’s employees and a murderer, the councillor neglecting his own young son until they both fall crying into each other’s arms and more such stuff. Between all that a good protest film unfolds, making the case for a very unpopular subject.

Jacob Cheung’s Cageman (1992) might just be the best of these social issue dramas. Showing Hong Kong society in a microcosm through the story of one house where middle-aged men live in literal cages, which they’ve made their home. A portrait of a community, by way of lovely vignettes of daily life and various life stories, shot in impressively complex long takes, that does double duty as a metaphor for most of Hong Kong citizens: squeezed together in small houses in dense neighbourhoods and/or buildings, subject to the whims of the land-owning rich. The main drama in Cageman stems from the owner wanting to sell the building, forcing the tenants to move out. But already having had such a bad lot in life that renting a cage in a stack of cages was their only option left, the men refuse: they have nowhere to go any more and cling to what little they have left. It leaves one with the same impression as the whole programme section gives of Hong Kongers: their sense of community is inspiring, their plight despairing.