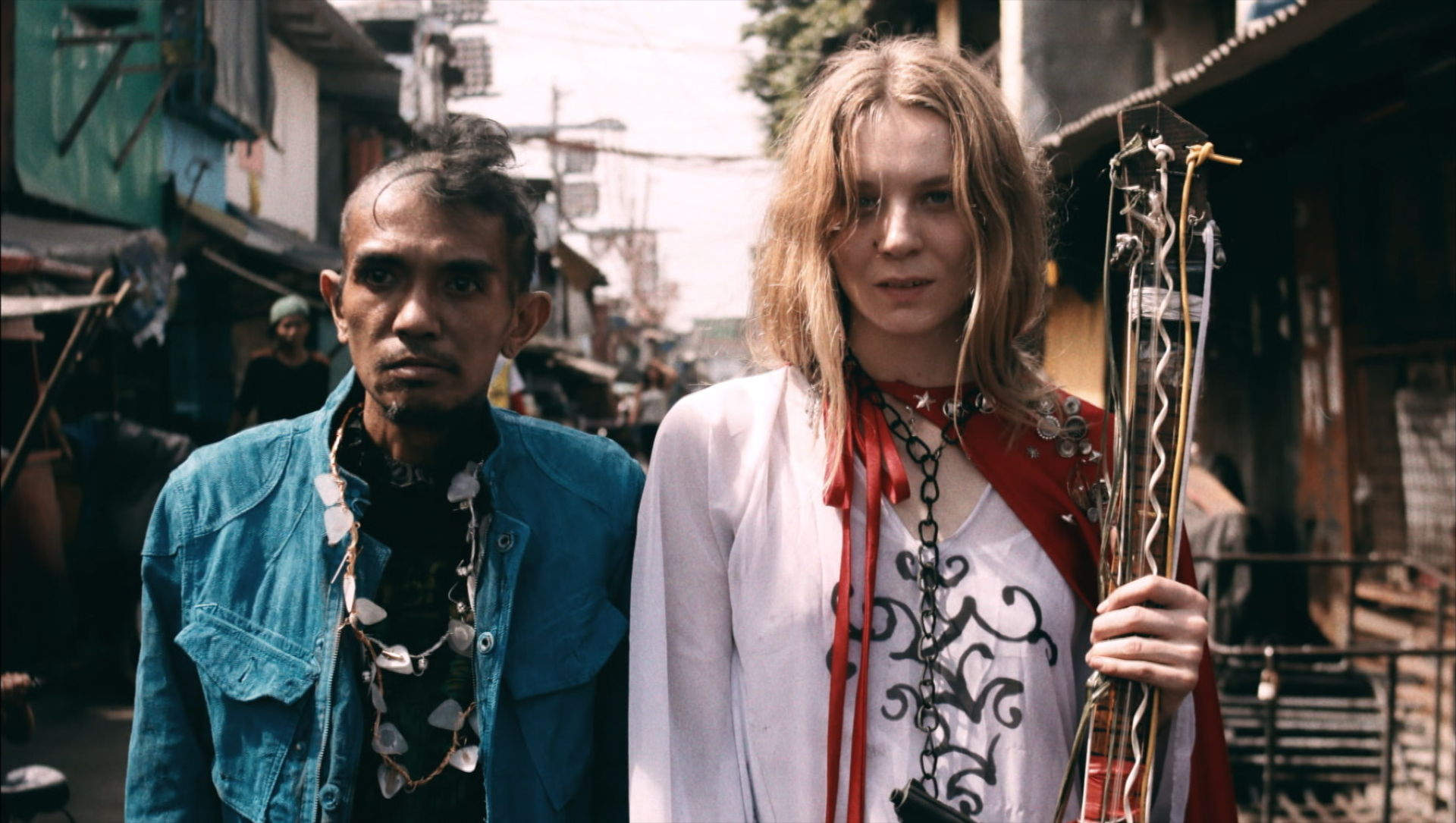 Before the screening of the film Orphea during the 70th edition of the Berlinale, the impressive new film of Alexander Kluge and Khavn De La Cruz, Khavn addressed the audience: “I hope your eyes will pop, your nose will explode, your innards will become delicious deserts.” That did not happen, but it turned out to be the perfect introduction for this second eclectic project of these two artists. After having worked together on Happy Lamento, that was presented at the Film Festival of Venice in 2018, Kluge and Khavn decided to continue to work together by filming the ancient Greek Orpheus and Eurydice myth, that has served as a source of inspiration for countless artists over centuries. Instead of a mere retelling, they used the myth concerning love, loss, hope and desperation as a metaphor for our times.

Naturally, music and its power and meaning, are the key concepts and centralised in the film. In the original myth, the Thracian Orpheus is a phenomenal lyre-player of supernatural ability who, with his music enchants humans, animals and nature alike. When his wife Eurydice is killed by the bite of a poisonous snake, his laments are so moving that he is allowed to descend into the underworld, where he manages to convince Hades with his music: Orpheus is allowed to bring his love back to the world of the living, but needs to trust her to follow him there and cannot under any circumstance look back at her.

As a proper tragedy demands, things do not end well: overwhelmed by concern Orpheus looks back, thus damning Eurydice to her death. Beyond grief, he returns to the world of the living alone, only able to contemplate his emotions through his music; the only human form of expression strong enough to express his desperation and grief. In a way, then, Orpheus provides the central myth on the universal power of art (and music in particular) to bring something or someone lost back to life, to negotiate emotions without having to put them into words or thoughts – a process that bears many similarities to the medium of film. It is a beautiful allegory about the artistic power to create, the opposition against destiny, and art as the ultimate driving force to exist.

It is no surprise that so many artists – from musical composers to painters, from poets to filmmakers – used the myth for their artistic purposes. However, not many of these artists permitted themselves the freedom that Kluge and Khavn used to tell their version of the myth. Probably the most obvious and prominent change that the film makes to the original narrative, is that Orpheus, king of music, is now Orphea, the queen of music, mesmerisingly portrayed by the German actress Lilith Stangenberg. In a kaleidoscopic tornado of images, classical and rock music, noise and text – traditional cinematic rules surrounding unity of time and place are loosely handled to say the least -, Orphea is the charismatic lead singer of the band Orphea’s Lament. She enchants her audience with her music, voice and appearance alike.

When her love, the male prostitute Euridiko (Ian Madrigal), suddenly dies, the story develops as is expected: she is consumed by grief and taken pity upon by the spirits of the underworld who let her descend. On this journey, however, she tries to start a revolution of all victims of oppression, expose the western consumerist society and condemn xenophobia. Completely in accordance with this political and social engagement, Orphea’s aim is not only to free Euridiko, but everyone trapped in the underworld. Which is in itself a rather noble aim.

However, do not mistake the film as a product of two Gutmenschen. This is a cinematic punk statement that tries to kick some sense and consciousness into its spectator. Which is predominantly achieved through ground-breaking cinematography. Ultimately, the film is the artistic hybrid outcome of the confrontation between the visions of two very different artists. The myth is used as a way to connect art with life and to draw parallels between the past and the present – even the future. That in the search for harmony, unity does not necessarily need to be a requirement, becomes evident through the fragmented structure of the film. The whole is divided into chapters which creates a filmic rhythm. Through its specific montage, the very grammar of film, the film turns into a musical composition of images and sounds. Orphea seems to be everywhere at the same time, a confusing effect that often is created by a green screen that she sits in front of and that continuously transports her to different surroundings – from the Philippines, via central Europe, to Greece and Silicon Valley. Yet this montage, layering images even within single shots, serves a subversive political purpose in a way as well: Kluge and Khavn recognise a world that is either on the brink of collapse, or that has already started to reinvent itself.

Kluge and Khavn: a match made in heavn

At first sight, the collaboration between Kluge and Khavn may seem remarkable, as the two artists share a rather different aesthetic. Yet they have a lot in common when it comes to their ideas about, and their approach to, cinema.

The German director Kluge is predominantly known as a founding member of the New German Cinema in the 1960s. Both a prominent German writer, director and television maker, he actively helped shape the landscape of German cinema over a period of sixty years with making films such as Yesterday Girl (1966), Part-Time Work of a Domestic Slave (1973), and his contribution to Germany in Autumn (1978) among directors such as Rainer Werner Fassbinder, Edgar Reitz and Volker Schlöndorff.

Like Kluge, the Philippine artist Khavn De La Cruz is a polymath. As a director, writer, poet and musician known for his controversial “non-cinematic” digital work, Khavn, like Kluge, positions himself outside the world of traditional and institutional cinema. What Kluge proposed together with a group of German directors in 1962 in the famous Oberhausen Manifesto – to definitively break with the past and with cinematic traditions – Khavn did in his way years later with his production company, meaningfully called Filmless Films.

A key characteristic of both artists’ work seems to be the aim to create cinema that is not ‘closed’ in its structure or meaning. The film then indirectly becomes interesting in relation to the still ongoing debate surrounding the cinematic auteur, a term that was introduced in relation to cinema during the 1950s by the critics of the French film magazine Cahiers du Cinema. Orphea is not only a hybrid work of art because it is comprised out of two very distinct and recognisable styles of two directors – three visions even if we include the performance of Stangenberg – but also because on the one hand, it is a perfect example of an author film, deeply personal and anchored in the political ideas of its makers, while on the other hand, it is a film that seems to refuse a static interpretation set by its maker. So that the reader or the spectator will be free to interpret the work in whatever way they seem fit. This spectator’s freedom is not always possible in practice: after all, it is a freedom that is always limited. This is no exception for Orphea, as the spectator has ‘neither control, responsibility, nor the power of decision […]: we are the prisoners of language, and language is ideology made concrete,’ as theorist Robin Wood wrote in his article Authorship Revisited (1990). Through the cinematic text the spectator always, in one way or another, responds to certain presented ideologies.

In the end, there are as many different versions of a work of art as there are spectators. Film liberates the viewer; film entraps the viewer; the artist, in any case, lets go of their work to let it live a life of its own. The camera therefore stands before a dichotomy that is not easily solved. On the one hand, the camera is often seen as the incarnated invisible observer (indirectly the spectator), yet at the other hand the camera could also be identified with the direct vision of the narrator (the author). Orphea seems to play with this duality, as the camera repeatedly snaps the spectator out of the cinematographic surrounding it creates because of the fragmented structure of the film, which forces the spectator to reflect on what they are watching, not to simply go along with the content of the imagery and the narrative. Orphea often plays music in a simulated surrounding, making it possible for the spectator to view the film from a different perspective outside of the imagery. By continuously alternating between actual space and recreated space projected on the green screen in which Orphea finds herself, the attention of the spectator is drawn to the very essence of cinema: the creation of a space that is not actually there, but that we perceive to be real nonetheless, creating an illusion of reality. This way the spectator never gets the opportunity to forget they are watching a film.

Orphea eventually is the direct outcome of a collaborative creative project that in itself enables many different outcomes. Kluge’s and Khavn’s film ultimately shows that the effect cinema has on its spectator is often mysterious, because its effect on the spectator is never fixed. This goes both for its maker and its subject; both are often surprised by the different meanings it creates. In the end, Orphea shows that cinema is always comprised of conflict – the inevitable dialectics of cinematography. Orphea is a film to cherish.

This Essay Outdoors article was published in May 2020