Out of the Comfort Zone: Rediscovering the Bond Formula 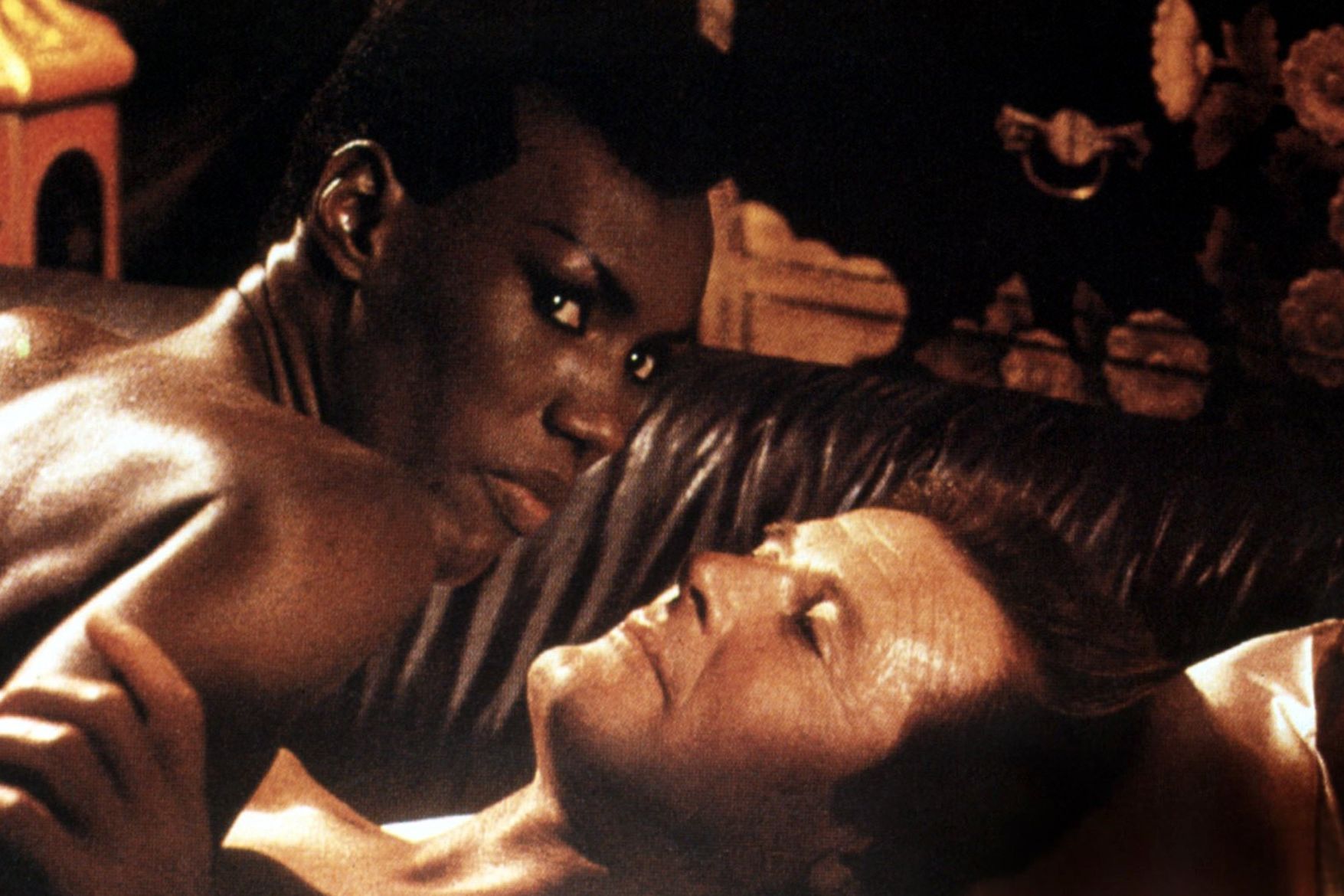 Does A View to a Kill (1985) mark the end of an era, or the beginning? Within the Bond cycle it is, of course, the last film with Roger Moore, then 57 years old. Even Moore declared himself “only about four hundred years too old for the part.” It is the last appearance of Lois Maxwell (Miss Moneypenny) as well. But it is also the first film that doesn’t refer to one of Ian Fleming’s novels (it takes its title from one of his short stories, to which it bears no further similarity). More importantly, it seems that new ways are explored to give the formula an update after years of stagnation.

The Spy Who Got Lost in his Own Universe

To me it seems the last successful film before A View to a Kill was the first one with Roger Moore: Live and Let Die (1973). A kind of reset after a weak string of films with Blofeld and his megalomaniac plans to conquer the world. Live and Let Die followed a slightly more realistic approach, on a more familiar playground. Bond’s visit to Harlem, with his appearance totally out of place, might therefore be more suspenseful than the overblown finales of the previous films.

Unfortunately, this refreshing approach did not continue in the next films. Bond fought battles with old and stiff bad guys in distant universes, like isolated islands (The Man with the Golden Gun (1974)), an underwater complex (The Spy Who Loved Me (1977)) or even space (Moonraker (1979)). The formula was becoming more grotesque with each new episode, as Bond found himself entangled in increasingly impossible schemes. An unsuccessful attempt was made to return to a somewhat more realistic plot with For Your Eyes Only (1981), but it lacked the charm and energy of Live and Let Die.

The Energy of Great Camp

Bond became camp. Again. At least two or three Connery-episodes are at least as campy as the string of 70’s episodes, but it lost the energy that marks great camp. I find that energy revitalised in A View to a Kill, which is at least as campy as the preceding films. It is illustrated in the introduction of bad guys Max Zorin (Christopher Walken) and Mayday (Grace Jones). Those extravagant characters are introduced on typical James Bond playground: the Ascot horse races. Their distinctive appearances are contrasted with those of the MI6 clique; M, Q, Bond, Macnee, Moneypenny, every one of them looking old, dull, and outdated. When Mayday energetically tames a wild horse, reducing the MI6 people to silly bystanders, it is in every way an unorthodox image. It is clear Bond finally meets two opponents who may be more powerful, and who are certainly younger and more at place in these modern times than he is.

Zorin is the kind of flashy nouveau riche guy that has bad taste written all over. Dressed in power suits and with his sadistic and unpredictable behaviour, he could just as well be a brother of American Psycho’s Patrick Bateman. His unlikely partner in crime is Mayday; Grace Jones giving an androgynous performance (very 80s) full of raw energy. The interaction between the two is wonderful, both being so expressive and unpredictable.

How does Roger Moore’s Bond relate to that burst of energy? It is in the interaction with them that Moore’s ironic touch reaches heights I have not enjoyed so often in his earlier films. In one scene, he is investigating the Zorin complex at night. A tape recorder in his room, playing the sound of snoring, must give the security the impression that he is at sleep. Right at the moment when Zorin and Mayday are about to discover Bond’s disappearance, he manages to get himself in bed: Mayday’s bed!

When at last they open her bedroom, we find him with a poker face inviting Mayday to join him. A highly unlikely love interest of course. The irony lies in the fact that in the traditional Bond-universe as we knew it until that point, Bond has always been attracted to feminine beauty. The androgynous beauty of Mayday is a great contrast with that of the traditional Bond-girl. This moment also seems like a comment on the age gap in the Bond/Bond-girl relations of previous films, as Moore was usually up to thirty years older than his love interest. It satirises the male fantasy of the old-man-with-pretty-young-blonde-cliché we became familiar with.

The Bond Universe Under Attack

To me, the vitality of the film results in larger part from this continuous friction between the conservative Bond universe, represented by old Roger Moore, and the rapidly developing world abroad. One feels that the filmmakers are aware of the need to innovate the formula, but they seem not quite sure how. We might see a ‘trendy’ plot involving computer chips, Silicon Valley and IT-tycoons, but then there is also the familiar and clichéd subplot of Cold War power play. There is the old world and its icons: Ascot, Roll Royces and chateaus, and there is the New World. There is an outburst of violence never seen before in a Bond film, when Zorin is machine-gunning his workers. It is clearly an update to the standards of the mid-80’s, established by Schwarzenegger et al. But to Roger Moore scenes like these didn’t belong to a James Bond-film: “It stopped being what they were all about.”

I think this statement references just as much to the level of immorality in A View to a Kill. Many of the villains in earlier films used violence as a means to reach their goal, whereas Zorin sadistically seems to enjoy the violence he uses. He throws a man in a giant impeller, shoots an innocent geologist while telling how he will make it look like Bond was the murderer, drowns a whole crew of his workers in a mine while also shooting at them; but it is ultimately his maniacal laughter that makes scenes like these more uncomfortable than the matter-of-factly violence in earlier films. However uncomfortable, I think this upgrade in violence and even immorality was necessary to keep up with the development of the viewer.

A View to a Kill is the admittedly not-great answer to the problem of stagnation in which the formula found itself. In many ways, it is clumsy in its attempts to revolutionize the formula. But just like Live and Let Die gained energy from simply exploring new ways to develop the formula, so does A View to Kill. It is usually the first film with a new Bond actor that marks such a (successful) change. A View to a Kill is in my opinion unique that it is the last film of a certain Bond actor that does so. And thus, it becomes an interesting clash of conservatisms and new ideas. After the somewhat repetitious Spectre (2015) and the build up to the probably last James Bond with Daniel Craig, we may hope the filmmakers catch the spirit of A View to a Kill and inject some new ideas to the formula.