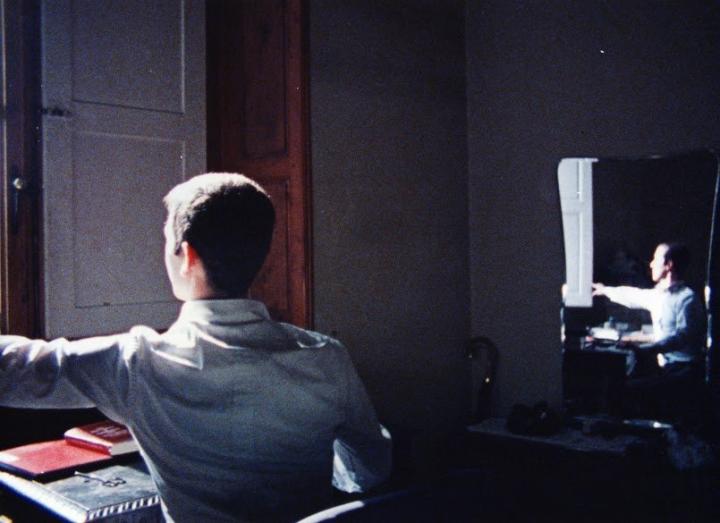 From the Notebook of…

Around age eighteen, Robert Beavers – a high school dropout – won an allowance from Jonas Mekas (and the Friends of New Cinema) for promising new avant-gardists. On the advice of his mentor Gregory Markopoulos (who appears here in the final frames), he moved to Europe in February 1967. Four years later he had captured the material that would go on to become From the Notebook of… Because the film’s images were composed in his early twenties, they are imbued with a youthful ‘I can do anything, and it will matter’ energy, powerful not in spite of but because of their naivety.  While the original cut was assembled in 1971, Beavers completed a re-edit of image and sound while pushing 50, and it shows. This tunnel through time invokes duration in a way that most works cannot afford to. In the notebook of Robert Beavers, the personal is revealed through the structural, and the ambition of youth meets the editing wisdom of later life. In constant flickering movement, the film comes alive and moves full steam ahead for the whole of its forty-seven minutes.

Indeed, it is a structural film, and one which slowly deconstructs itself before our eyes to show us just what it’s made of, and how, while the handwritten texts suggest why. Rotating shapes are animated by uncertain means. Are these silhouetted objects moving through real space in real time directly in front of the camera? The on-screen texts make reference to ‘mattes’, inferring that they are responsible for the bizarre shifting shapes. Near the half-way mark, we start to see the mattes as whole objects, instead of mere filters of our field of vision. Giant black sheets with small and innocent windows in the middle. It is remarkable to realise this tiny piece of coloured filter gel was responsible for the grand and blurry pink which filled the screen earlier. The silhouettes have been contextualised. So goes the whole of the film: de-contextualised action, object, motion followed by text description followed by a clearer view. “Change of exposure from dark to light causes the shape on glass to diminish” reads one note, given a pink tint via filter. Pieces of the frame are repeatedly compartmentalised, allowing us to see several images clearly at once. These ‘windows’ are edited together with shots of actual windows, namely Beavers’ pension window.

In structural filmmaking I so often feel the lack of personal presence – while Snow, Gehr, Kubelka et al’s works are distinctly their own, they often leave me missing a sense of humanity. What I really appreciate about Beavers’ approach is not only his continuing personal presence onscreen (an admittedly rather detached presence) but the decision at almost fifty years old to include in his final cut the bizarre, unique compositions which include his face just barely peeking in from the edge of the frame. It not only adds a stronger element of subjectivity, but is disarmingly intimate – in opposition to the repeated and detached view of a nude subject.

From the Notebook of… is a fascinating oddity, uniquely unique even in the ‘anything goes’ of the avant-garde. It is a magic show and a lesson in how to make magic, pushing you to pick up your own camera after it ends.

From the Notebook of… was recently featured in Program 4 of the Ultra Dogme Virtual Film Festival, where you can still see it now.

This Essay article was published in May 2020