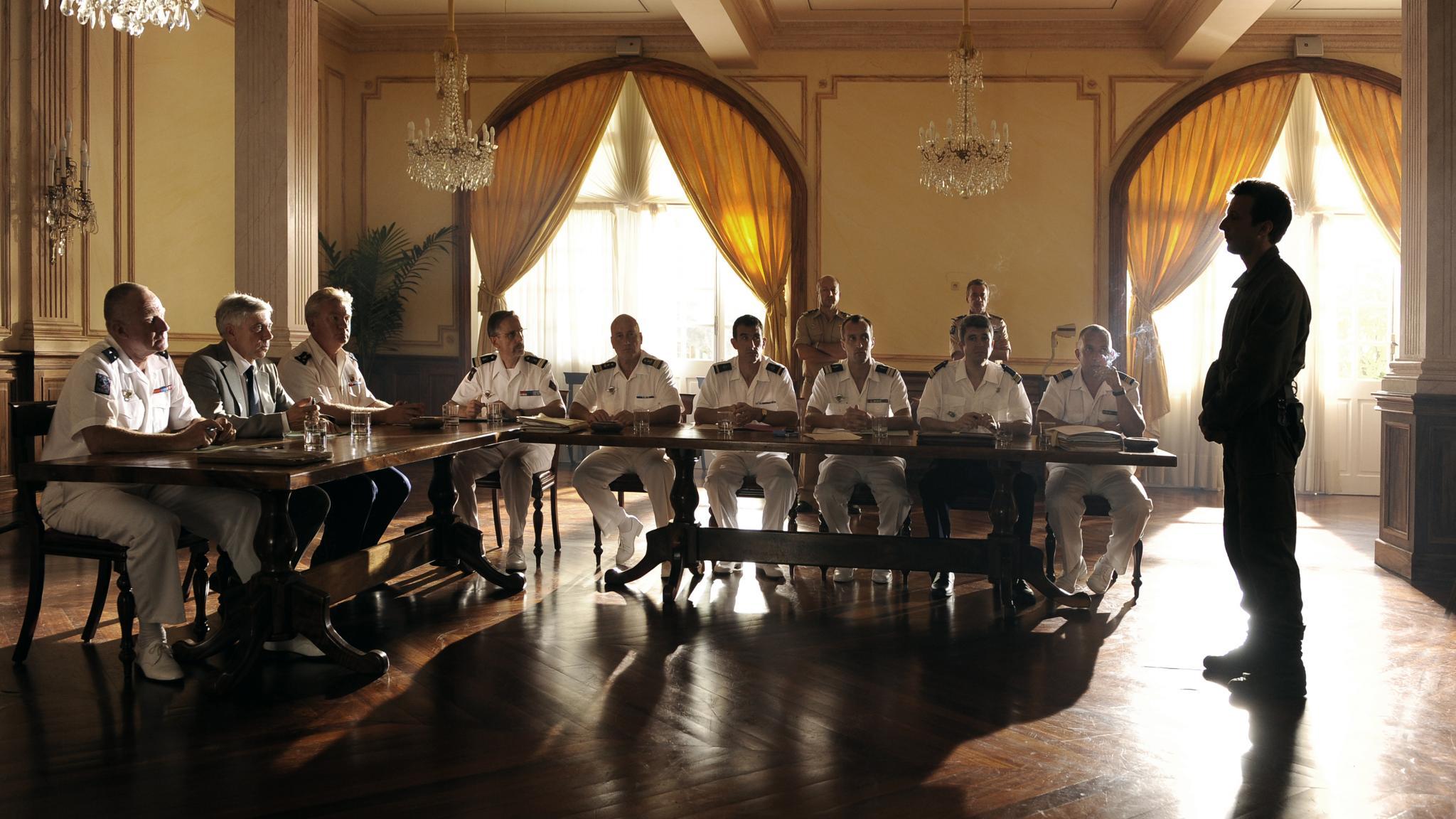 Next sunday, the French vote on who their next president will be for 7 years, the leftist/centrist Macron or the right wing Le Pen. Another major candidate, the centrist/right wing Fillon, didn’t make it to the second round of voting. Most believe this is because of the corruption/nepotism charges against him, having created a fake job for his wife while in office that netted her hundreds of thousands of Euros (a popular organized crime practice).

The self interest of French politicians in French thrillers

According to pundits in the Dutch newspaper Trouw, French politics and corruption are so closely tied together even Wiiiild Hooooorses couldn’t drag them away. Corrupt French politicians only looking out for themselves, their own interests and careers instead of the public good or what the people need, are all over French cinema. Not only do we find them in clear political satires such as This Is Our Land (2017). Notably, they’re even more scathingly portrayed in a slew of recent French thrillers (that hardly get any international distribution anymore, unlike a few decades ago).

Philippe Haïm’s Secrets of State (2008), Matthieu Kassovitz’ Rebellion (2011), and Olivier Masset-Depasse’s TV-movie Sanctuaire (2015) all share protagonists who work for the French state and try to save lives of both their countrymen and others, but are thwarted and/or betrayed by higher-ups in the government or even the president himself. Who, when faced with either saving lives or saving face, invariably choose the latter. What is ‘important for the country’ is not the lives of its citizens, apparently

How to win elections, Mitterand style In both Rebellion and Sanctuaire, the protagonist is a negotiator in service of the state in the 1980s. Both try to mediate between the French state and people on the fringes of French society. Both end up betrayed by president Mitterand in the end, who foregoes the opportunity to save lives several times in order to secure votes, whether from the general public or within the political machine. Both films culminate with the 1988 re-election of Mitterand as president of France.

In order to win that election, the (leftist) president moves to the right politically, becoming more of a hard liner and a hawk to take away votes from his more right wing opponent. Mitterand succeeds with this strategy, but his ‘decisive show of force’ means the needless killing of people on opposite sides of the world. When a bit of patience and diplomacy could’ve saved everyone involved – patience and diplomacy for which due to the election Mitterand couldn’t ‘find the time’.

In Rebellion a special forces hostage negotiator is sent to the small island colony of New Caledonia to negotiate the release of a group of gendarmes by a rebel group of Kanak locals. Kanaks being the original inhabitants of the islands that make up New Caledonia. The rebels have taken the French policemen hostage. deep in the jungle. They want some sort of self rule, instead of being ruled by colonial proxies for the French government that use their position for financial gain. The army sent from the mainland just wants to raid their positions, regardless of how many lives this would cost. The clock is ticking, because the French election is approaching and president Mitterand wants the situation resolved before this. Our hero the protagonist manages to win the trust of the rebel Kanak leader and works towards a peaceful solution whereby the rebels will give up both the hostages and themselves for legal punishment. On one condition: the local French governor must be preventen from his plan to push through a law giving him more authority and the local population less rights, on the day of the election so that nobody in France will notice until it’s done. An entirely reasonable request, in accordance with French (constitutional) law.

But Mitterand can’t be seen as ‘weak’ by giving to the hostage takers’ demand, because his opponent Chirac uses the stalemate in New Caledonia to win points in debates. Thus the election decides the fate of both hostages and hostage takers, as the army swoops in and both a number of hostages and most of the rebels die. Parisian political posturing means death and destruction for people on an island thousands of kilometers away, that are colonised supposedly so they can be protected by the laws and ideals of the colonisers. The idealistic, well meaning negotiator is helpless in the end, and lied to by his superiors and the politicians above them who just don’t give a rip about these people that their predecessors decided should be French.

Not finding sanctuary in Sanctuaire Mitterand is only seen and heard indirectly in Rebellion, through footage of televised debates and reports on the election. In Sanctuaire he makes an actual appearance, meeting with a police investigator who acts as a mediator between the French government and Spanish Basques who are members of ETA and live in political asylum in the south of France. In this conversation he mentions the Kanaks from Rebellion as an example of the problems he has. It is in this conversation that he promises the mediator his support – support he will soon withdraw when the election becomes hotly contested and a financial deal with the Spanish government takes political precendence over the lives of Spanish nationals wanted by that government.

Unlike Rebellion, Sanctuaire takes place throughout the decade, starting in 1982 and lasting until the 1988 election. The Basque separatists ETA had become part of the anti-fascist struggle in Spain, ruled by Franco until 1975. Because of this ETA combatants found sanctuary in French Basque Country north of the border during the 1970s – with (unofficial) support from the French government. However, after the socialist party wins Spanish elections by a landslide in 1982, the ETA had merely become separatists again, and the new government declared open season on its members. A paramilitary group called GAL, secretly backed by the government, tracked down and murdered members of ETA in France, resulting in an underground war of sort, with slayings on both sides including many innocent bystanders. The French government is caught in a bind. Having supported the ETA and given its members political asylum and papers, it now has to deal with this new situation. ‘our’ mediator has to try to get the new Spanish government and the leaders of the ETA to get together to find a peaceful solution. One that stops the killings on French soil. Over the years he manages to gain the trust of the leader of the Basques in France, but gets little cooperation from the Spanish government and increasingly little from his own superiors. Especially after he discovers that French policemen illegally aided the GAL in tracking down ETA members. Both governments are more concerned with posturing and publicity than with the lives of the ETA and GAL members murdering each other and the people around them.

The ‘war’ lasts until 1987, when with the elections on the horizon the Mitterand government comes to an agreement with the Spanish government and uses all the info the mediator collected to mediate to arrest all the known ETA members in France and turn them over to Spain. Betraying the mediator, his ideals and his promises to the ETA and their confidence in him all in one fell swoop. Without the Spanish government having ever negotiated the surrender of the ETA or making any promises not to kill them as soon as they’ve crossed the border. Despite them being willing to surrender under safe conditions. Once again politics trump people. Political reputations and careers are more important than human lives. Secrets of State
Warning: Spoilers may follow for Secret State.

Secret State is a slightly different film. It takes place in present day (that being 2008) and doesn’t feature Mitterand or any other president. We simultaneously follow a young female student being recruited into the DGSE, the French anti-terrorist secret service, and a young poor man being recruited into a jihadist extremist group. Their storylines only converge when he tries to blow himself up in Paris and she has to stop it. Both are pawns in the games of powerful men at the top of organisations. The kids believe to have free will but are manipulated into action and thought at every turn.

Diane is that young student, who is skillfully manipulated and blackmailed into joining the secret service by a young man pretending to be her lover and an older man pretending to be his father, who uses her past as a prostitute against her to make her join the DGSE. Since she was studying Arabic, she can go undercover in Lebanon to uncover a suspected plot to explode a bomb on a Paris subway… by seducing the rich leader of a terrorist organisation. Her life never seems to change. While she is being used for her body as much as her language and secret agent skills once again, Pierre has to go to prison while his mother can’t afford the rent anymore. Inside the prison, an employee of the man Diane is seducing sees potential in the desperate Pierre as a suicide bomber. First he converts him to Islam and protects Pierre inside the prison from other violent groups. Upon release Pierre is sent to a training camp in the Middle East, while Diane trains to be a secret agent.

Even though Diane’s cover is blown soon into her operation, the leader of the terrorist group decides to have his fun with her anyway while her superior at the agency suspects as much but feels any info that could be gleamed from this is worth the risk, including her body and possibly her life. While risking Pierre’s life and body is the sole object of his recruitment, as he is to blow himself up. Ultimately, Diane realises on her own instincts what’s happening and manages to talk Pierre out of killing himself on the Paris subway, despite both sides trying to manipulate her and the terrorist side manipulating him. Since she had to basically return to her prostitute life on orders of her boss, only to find out he easily and callously risked her life for what turned out to be false info, she quits.

Her boss ponders for a brief moment if all this humiliation and blackmail and risking of lives is worth it “in the interest of the country”, and then resumes his day. While he may not be a president, he is even more powerful within his organisation than a president ever is over a country, deciding over life and death with ease. The same goes for the terrorist leader, who gets away with his plan, safely in the Middle East again. Both these men pretend to care about their subjects in order to put their plans into motion, but human lives seem to mean nothing to them in the face of ideals and gains.

In that sense, they are just like the politicians in the other two French thrillers. Seen together, Secrets of State, Rebellion and Sanctuaire provide a scathing commentary of (political) leadership in France, not found in the arthouse cinema that is distributed around the world.