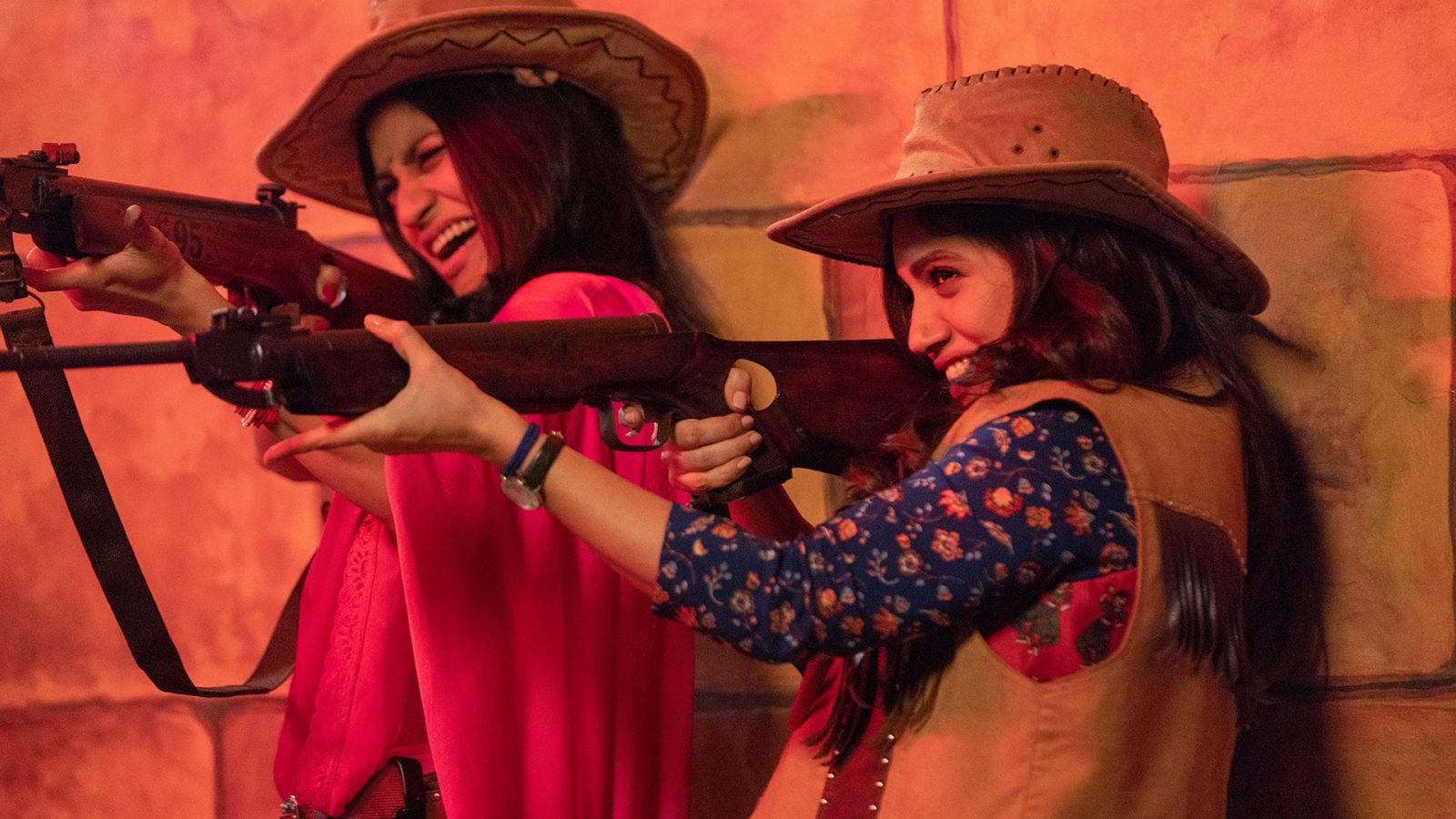 Dolly Kitty and Those Twinkling Stars

CinemAsia 2020 is about to kick off in Amsterdam. The thirteenth edition of the festival celebrating Asian film and food will begin this Wednesday the 4th. Although the festival had to downsize its programme somewhat this year (by at least one day and almost 1/4th fewer films than last year), it’s still going strong. One of the festival’s main features is its yearly competition, in which eight films will be judged by a jury of film professionals. The 2020 edition has a strong field, with films from Bhutan, China, Hong Kong, India, Indonesia, the Philippines, and Tibet.

Before the start of the festival, I was only able to see five of the eight films in competition, but I believe the jury has got its work cut out for them: it will not be easy to pick a winner amongst these strong contenders. And I say that without having seen the Bhutanese debut film Lunana: A Yak in the Classroom (2019), Pema Tseden’s Balloon (2019), or the new Lou Ye, Saturday Fiction (2019), starring Gong Li. Of the Chinese-language films in competition, I was able to see the lovely and moving Fagara (2019).

Fagara is the latest film directed by Heiward Mak. Besides directing, Mak is mostly known for co-writing the Hong Kong rom-com Love In A Puff (2010), and for producing the drama Mad World (2016), which opened CinemAsia in 2017. In turn, Fagara is produced by the venerable Ann Hui, herself a much respected filmmaker with an impressive oeuvre. Together they’ve created a heartfelt drama in which three half-sisters learn of each other’s existence at their father’s funeral.

They have to deal with his legacy, by (re-)examining their relationships with their father, getting to know each other and by taking over the hot pot restaurant he left behind. The sisters grew up separately in Taiwan, mainland China, and Hong Kong, where the restaurant is located. It’s the home of HK sister and main character Acacia, played deftly by Sammi Cheng. Who proves once again why she is the star she is, effortlessly switching between near melodramatic sadness, slapstick, and sarcasm. In a nice nod to the 2000s romantic comedies starring her and Andy Lau (which cemented Jonnie To’s production company Milkyway as an industry powerhouse), Lau plays her ex in what amounts to an extended cameo.

It’s indicative of how, though the film does bring together three women from the three main politically divided Chinese-speaking regions, it’s also steeped in Hong Kong culture. Another part of that culture highlighted is, of course, the food. In order to get their father’s restaurant going again, the sisters have to find out how he made his signature dish, the one that brought in the customers. Cue several delectable cooking scenes, that make your mouth water for the fictional fagara soup after which the film is named. This process, of course, also brings the three women together and is what truly makes them a family, accepting their father for what he did right in life instead of just remembering what he did wrong.

Dolly Kitty and Those Twinkling Stars

Women and family are also central to Alankrita Shrivastava’s Dolly Kitty and Those Twinkling Stars (2019). Though these women, cousins instead of sisters, have to navigate the patriarchy of India rather than dealing with a literal father. Dolly seems to have everything worked out. She has a decent job, a hard-working husband and two loving children, plus a down payment on a new, big apartment in New Delhi. That’s what it means to be a modern woman in India while still respecting patriarchal tradition, she thinks. Or rather, pretends to. She hasn’t been attracted to her husband in years and he has started to stray from their bedroom.

Meanwhile her niece Kaajal has just moved to Dolly’s city from a small village, after refusing an arranged marriage. She is able to find a job which troubles her: in a ‘romantic’ call centre, to which lonely men call for what is supposed to be just romantic conversation. Needless to say, many men who call are looking for more and anybody who finds out about her job accuses her of far worse. While the job does offer Kaajal (named Kitty on the phone) financial security and a modicum of independence from her family, and is for the most part not indecent at all, she does have to say words like ‘baby’ and ‘I love you’ for the first time in her life in a fake conversation, rather than in real life.

It’s the start of an ambitious journey towards self-discovery for both women, who try to fit in the roles patriarchal society proscribes for them, but find that self-actualisation, (sexual and emotional) fulfilment, and all the happiness and heartbreak that come with that lie outside of those roles. Like Mak, Shrivastava tells her dramatic story with poignant humour, brisk pacing, and a pleasant visual style. She especially makes good use of the colours and lines in the call centre. Which she does partly through using the red dividers in between employees. Depending on the placement of the camera against or through the divider, the intensity of the red light changes to reflect the moods and emotions of Kaajal.

Homecoming (2019) is a more low-key drama, less flashy, and more subdued, but also deals with a woman reconsidering her marriage and life while examining societal issues. In the days leading up to Eid (the festival celebrating the end of Ramadan), a young married couple travels home from the big city to his family in the countryside of Indonesia. The atmosphere is already tense because Aida suspects Firman of having an affair, and then they hit a young man on his motorcycle with their car, causing his death. Aida was driving, and out of guilt, she gets involved with the now-widowed Santi and the funeral.

Though in some ways the two women couldn’t be more different, they realise they also have things in common, including being a woman in Indonesia. Both the things Santi has to deal with surrounding the funeral and her husband’s family, and the behaviour of Firman during all this, makes Aida re-examine her own life and what she wants from it. Director/writer Adriyanto Dewo uses this story to touch upon issues of gender and class in modern Indonesian society, as the rich couple from the city is confronted with life in the countryside they normally only drive through.

The Wayfarers (2019) takes us back to India to a very poor couple in the countryside, who don’t have the luxury of being able to drive. Though Nathuni and Lakhpati are not a couple per se, they are strangers who meet along the long walk from their home to the nearest town, looking for work. As they walk together, they get to know each other, share their personal (hi)stories and stand up for each other when necessary. Through this road-movie of sorts, filmmaker Goutam Ghose paints a picture of the poorer classes in India and their daily trials and tribulations.

In the film’s opening scene, Nathuni is almost raped by two random passers-by while collecting firewood. This seems to be something she has to deal with from time to time, just another obstacle in a poor woman’s life. When asked by her husband if everything is okay, she replies tellingly: “Is it ever okay for the poor?” A sentiment later repeated when she says: “Where do the poor find happiness?” Her husband is crippled, a result of the one time the local poor tried to stand up against the exploitation of their land and labour by big business. The only work Nathuni and Lakhpati end up being able to get is the backbreaking land excavation her husband was fighting against. Although Ghose’s portrayal is heart-rending in the way it shows how the poor are dependent on exploitative labour and even just weather conditions for their subsistence, he also shows how the poor in India manage to cope with their lot in life through human decency and solidarity.

Neither decency or solidarity are on display in John Denver Trending (2019), a Philippine drama on the real-life repercussions of online bullying. Fourteen-year-old John Denver gets in a fight with a bully over a false accusation of theft, but as soon as a video of the fight goes viral, he is seen as the violent bully. He is humiliated and harassed, while the issue of the alleged theft continues to plague him as well, ultimately resulting in police persecution. His mother is the only one who stands by him throughout.

This is shown in a number of lovely small moments between the two, during which the shy, introverted John Denver briefly opens up a bit. The camera rests here, while at other times ratcheting up the tension with fluent long takes of scenes of confrontation. In his feature debut as director and screenwriter, Arden Rod Condez creates a tragic and infuriating tale of wrongful accusations and things being taken out of context on the internet. A universal tale for our times, yet also very specific in its detailing of life in the Philippines.

The juxtaposition of most school children singing the national anthem during the morning assembly with John Denver being taken away by police for something he didn’t do, cannot be a coincidence. And although his name is never spoken, big-mouthed professional bully Duterte’s presence looms large in the background, through portraits and the general atmosphere of persecution of poor people pitted against each other. John Denver Trending won six prizes at the Cinemalaya Philippine Independent Film Festival, and I wouldn’t be surprised if it won at least one prize at CinemAsia by the end of this week.

This CinemAsia article was published in March 2020