Reincarnations, Doppelgangers, Smugglers and the Patriarchy. 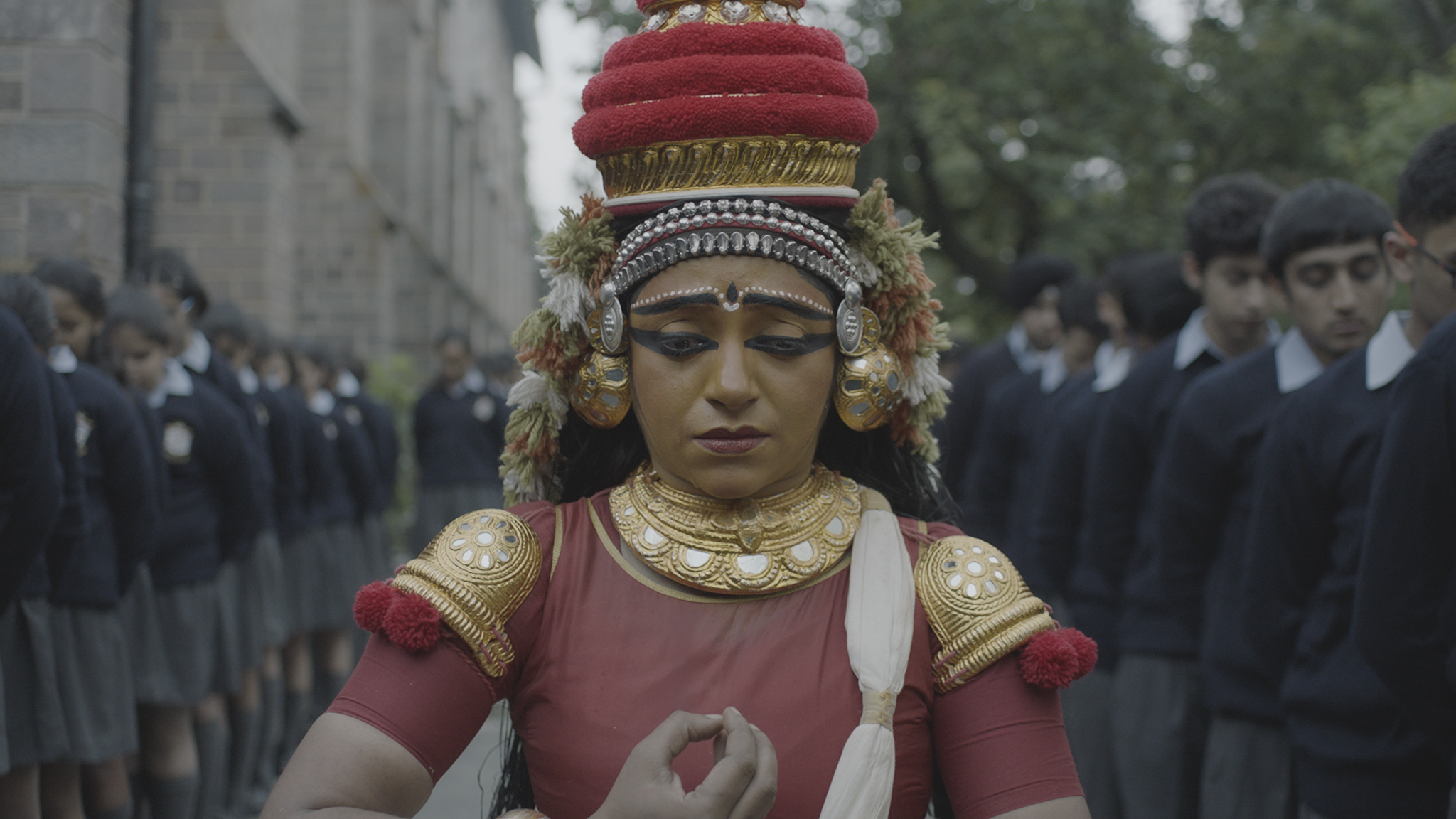 We love Indian cinema at Frameland. In the past few years, the IFFR selection of Indian films has usually been rather good (though in our humble opinion, could always be bigger). This edition seemed to be shaping up to be quite strong, proving the diversity of Indian filmmaking from all over the vast country. Including a lovely Hindi documentary, the return of Gurvinder Singh, not one but two crime epics with a socially conscious bend, experimental science fiction, and a cosmic coming-of-age tale. In the end, however, it turned out to be a bit of a mixed bag.

Abbasi features both their life stories and their skills as imitators, from looking scarily like the real deal (Walde) to not really resembling the star but being able to act like him very closely (Khan). All of them have managed a kind of acting career out of impersonating their star counterparts, ranging from live events to being the actual body double on set, to even starring in their own films that look like beloved classics of the stars.

Or bewildering event films such as Amir Salman Shahrukh (2017), which features lookalikes of Amir Khan, Salman Khan and Shah Rukh Khan in a satire of the 1977 classic Amar Akbar Anthony, but instead of the three long lost brothers who get reunited being Hindu, Muslim and Christian, they grew up to be the three biggest Bollywood stars of the past 30 years.

But besides that curiosity factor, Abbasi also delves into the lives of the mimicry artists, from the impact of always acting like someone else on their own selves, how their family feels about their career and their own sometimes ambivalent feelings to their careers, which has brought them their own type of fame, but not as themselves. What life is there beyond this imitation of life? A touching, funny documentary with a hint of melancholy.

Malik (2021) is Malayalam filmmaker Mahesh Narayanan’s third feature. He opens with a bravura long take reminiscent of the first shot of Boogie Nights (1997), in which most of the important characters in this sprawling epic are established. It’s an impressive statement of intent that immediately starts of Malik with a dazzling momentum, which is carried through throughout most of what follows: a politically layered, non-linear crime epic, in which Narayanan weaves a portrait of two marginalized community’s (Muslim and Christian) on Kerala’s shore, through the story of one fisherman turned smuggler, gangster and community leader (and all those in his orbit).

Ali Suleiman is the ideal of the gangster godfather, who makes his living with illegal business and deadly violence, but who also is beloved in his community for his charity (including building a school, where none existed before in the town) and for protecting the small town from the preying hands of greedy politicians and the violent police that works for them. Malik straddles the divide between mass entertainment and arthouse ideals in just the right way by being both a thrilling crime epic and a strong, critique of a coastal countryside ruled by corruption, tradition and religion.

Rajeev Ravi’s The Harbour (2022) also tries to straddle this divide, but does it in just the wrong way and ends up being neither fish nor fowl. Just like Malik, it’s a fiction based on a historical clash between police and people and builds up towards that event as a dramatic climax. Unlike Malik, in which the sectarian riot caused by police is part of a much larger, more nuanced tapestry, The Harbour is quite blunt and simplistic: the Communist union stands up for the people, the other unions and the bosses that preceded them are evil exploiting the people, who suffer in abject poverty. A message which is hammered home again and again throughout a three hour running time, with many repetitive, unimaginative fight sequences. There’s potential for either a rousing epic against the man in the story told in The Harbour, or for a thorough dissection of its themes of poverty, abuse, corruption, politics and labour issues. But it all remains a rather one-note, dismal and dull affair.

I should note that just after writing this, I discovered The Harbour has been removed from the festival programme and website, just like it was for the 2021 edition at the last minute. If this is because, just like last year, the film isn’t finished yet and the screener I saw was once again of an unfinished version, then of course all I wrote above doesn’t count.

The Cloud Messenger is one of the highlights of IFFR 2022, and a typical film for the festival. An ambitious debut feature, that gives you hope for the future and makes you lookout for what the filmmaker will do next. Rahat Mahajan returned to his alma mater, a boarding school in the Himalayas, to tell a story of current day teenage love that is also an eternal love, through reincarnation and a seemingly never-ending curse on that same love. Can Tarini and Jhaivardana break that cycle of longing and pain?

Jhaivardana and Tarini were once lovers in a story that has now become a myth. An evil king wanted Tarini for himself, so he locked him up to have her, but she defied him until he killed her. This story is told by masked dancers performing a variety of old Indian performance arts, including Kutiyattam, Theyyam and Kathakali. At first, they perform in old temples, but later we see them in the boarding school, as visions the two teens have. Past, present, myth and reality intermingle in the misty haze that seems typical for films set in this part of the country.

Which creates just the right kind of atmosphere for this slow but expertly paced mythical story. Within which the modern-day incarnations of ancient lovers play out what seems to be their everlasting destiny, handily infusing their teenage love with justification to how enormous their love story feels to them at that age. Sophisticated and smart storytelling with poetic images that, as the photography teacher of the school says, stir something within.

Sadly, that was the last of the soul-stirring Indian cinema at the festival. Gurvinder Singh’s Crescent Night (2022) came with high expectations, being the third in his trilogy of patriarchal hierarchies dominating life in rural Punjab, after Alms for the Blind Horse (2011) and The Fourth Direction (2015). Both those films worked as slow-burn pressure cookers, in which tension rises as violence of the past ensures violence in the present. It’s just a question of when it’ll burst out.

Crescent Night follows this pattern. Modan returns to his home town after serving a 15-year prison sentence for the murder of the village chieftain who as landowner humiliated his father to death. The landowner’s sons have taken over, and now dominate the life of Modan’s brothers and his best friend. While it’s always clear that another confrontation is imminent, despite Modan trying to build a life for himself with a new bride and child, there’s hardly any tension building and the drama feels predictable for the most part. Fragile male egos are gonna try to dominate other fragile male ego’s, until somebody snaps. It’s been done better before, by Singh himself even. Crescent Night works on a basic level, but pales in comparison to the breathtaking and far more compelling The Fourth Direction.

Again I should note a caveat: my streaming copy remained slightly out of focus for 90% of the film. We used to have bad projection, now we have bad streaming. Had this not been the case, perhaps I would’ve been able to get into the film more and might’ve felt the tension I now missed.

Hawk’s Muffin didn’t come with such expectations and yet managed to disappoint even more. A post-apocalyptic sci-fi that somehow takes place in a very green jungle, it tells the story of the descendants of the pilot who dropped a nuclear bomb destroying most of India (or the world?), for which he was rewarded with a patch of land in said jungle. Where he creates a small society consisting of his immediate family and a small group of soldiers to protect them from intruders.

But mostly it’s about how his son, now the patriarch of the family, rules his roost and doesn’t want his daughter, the only young woman in the world apparently, to interact with the men around here, except the elderly. What else is new? There are some lovely scenes in which she meets another pilot who lands in the jungle, who has some supernatural powers and might be an alien. Especially when they literally fly through it, or enjoy themselves in front of a majestic waterfall.

But everything surrounding such sequences feels trite and mostly consists of underdeveloped male characters upholding a very traditional patriarchy. The occasionally inspired cinematography isn’t enough to elevate this material beyond a long, tiring slug through the jungle. Which felt an appropriate way to end yet another online festival, which just seems to be a more exhausting experience every time.