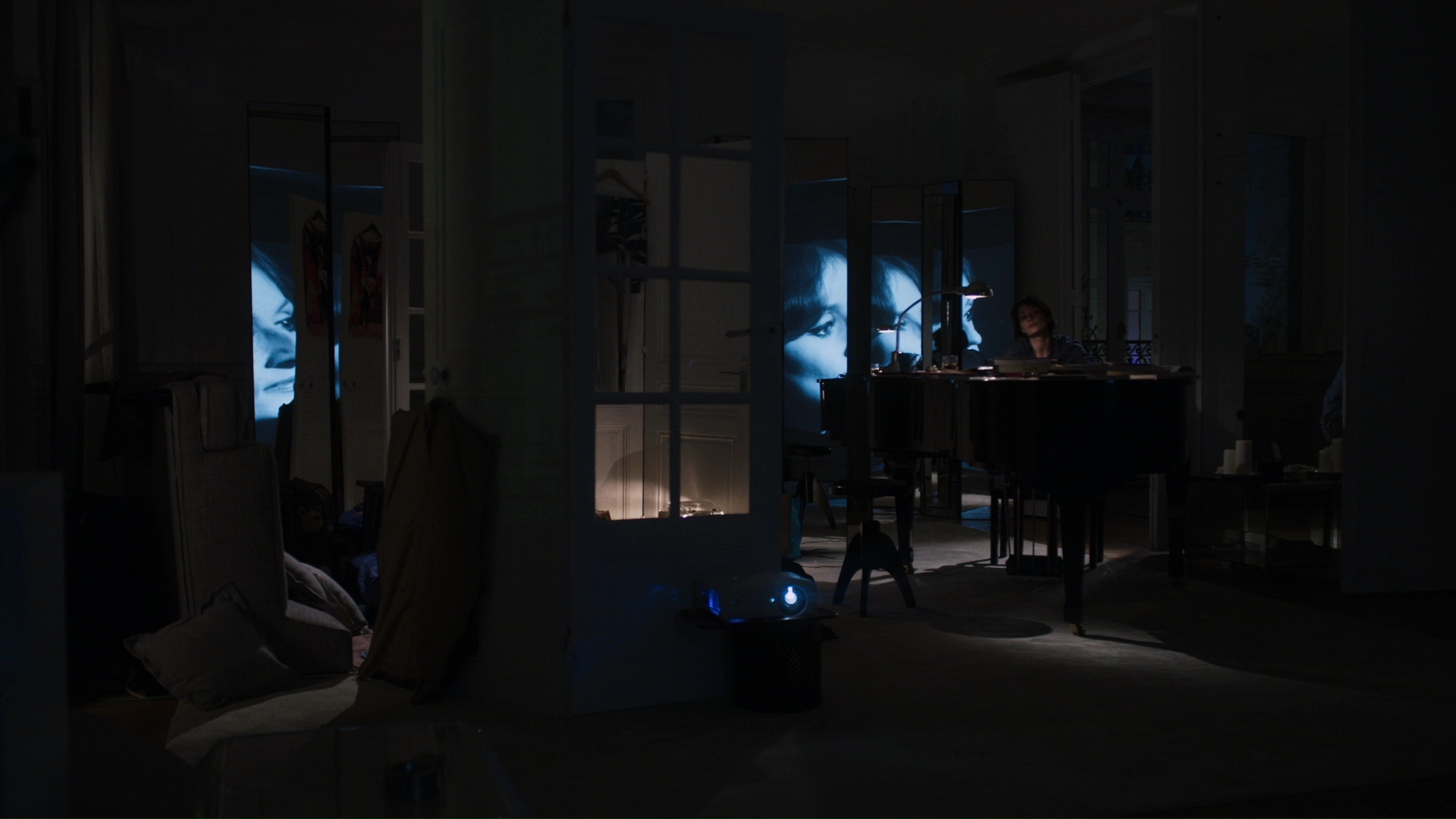 The film society of Lincoln Center’s annual Rendez-Vous with French Cinema Series is always a bounty, but this year, there was a kind of synaptic magic linking the disparate selections. The good films were great and the bad ones were shot by Lee Bin Ping. The rich blues lighting endless plumes of cigarette smoke and frightening hallways seem to have spilled from one mind. France has always been a unified destination on film. Its every hill and valley, boulevard and avenue has been so well documented that you never feel lost in French cinema. It’s easier to imagine getting lost in Germany, Poland or even Japan. Parisian streets are more familiar to me than those of most of New York and I’ve lived here for almost three years.

The selection has a welcome interplay between the tonally bleak and the overwhelmingly rapturous. The comedies, like Nobuhiro Suwa’s The Lion Sleeps Tonight (2017), bring with them acres of resonance through shrewd historical play. The film is ostensibly about an ageing actor who’s visited by the ghost of an old lover, but it mostly finds him wreaking light-hearted havoc with a crew of 10-year-old film buffs who decide to follow him around and make a movie with him. The film never quite rises above agreeable on its own, but thanks to the lead actor being played by legendary New Wave actor Jean‑Pierre Léaud, it practically floods the room with cinephile heartache. Léaud was their age when he started making movies with François Truffaut, whose 1975 charmer Small Change is also about a gang of kids running quietly amok. I was sort of under the impression that Léaud’s final role would be in Albert Serra’s The Death of Louis XIV, a melting Rembrandt shot in noisy digital, but it was a joy to see the old heartthrob ushering these kids into his past, the art that made him an icon, and into their future. As trifles go, this one’s delicious. Jeannette: The Childhood of Joan of Arc

Cinematic distance and the meta-machinery of filmmaking appears again and again throughout the line-up. You see it in the lines left in the edit spoken by child actors to each other and their director as they cavort in the deliriously silly but heartfelt Jeannette: The Childhood of Joan of Arc (2017), a metal musical about the warrior’s early life featuring a lot of actors headbanging, awkwardly dancing out of time and lip-synching to the arch emo score. Bruno Dumont, who started his career fascinated by the murder and rape of innocents, has evidently had enough of his own shtick, because in 2014 he decided he’d give comedy a try and thankfully hasn’t stopped since. Jeannette might be the funniest of his three comedies through sheer incongruity alone, even if the jokes aren’t as precise and strange as those in P’tit Quinquin (2014). Joan sees her visions of angels, consorts with young children about the direction of provincial French life during wartime and later gears up for her destiny on the battlefield. All of this scored to music that’s half prog rock intricacy and half teen-friendly nu-metal. Lise Leplat Prudhomme as the younger of two Joans is a ceaselessly adorable little marvel, giving one of the best performances I expect I’ll see all year, never losing her childishness in the thickets of Dumont’s dialogue. She sells Joan’s awakening without ever appearing to have noticed she’s in a movie, which is, of course, ridiculous because there was plainly hours of rehearsal involved in preparation for the role. That Dumont doesn’t smother any of her impulses or little mistakes adduces his strangely but admirably lackadaisical approach. The film is so simple and so obviously just about the joy of watching his typically unconventional leads singing and dancing in ways we aren’t meant to see. It’s like the world’s best elementary school pageant and I’m very happy it exists.

Raymond Depardon’s 12 Days is a devastating accidental (or not?) rhyme with Jeannette in that the little warrior’s visions may have been the work of mental illness. Depardon’s film spends a few excruciating hours inside a French psych ward where patients, placed there against their will, plead their cases to the board who will decide if they are fit to be released. To say it’s not for the faint of heart is almost redundant. It’s newly dispiriting and heartbreaking every ten minutes. Depardon’s only stylistic device is a slow prowl of the hallways of the asylum, free of the sight of people but loaded with their screaming and yelling. It gets to you. It’s meant to. This is exactly the kind of story Dumont might have told as brutal fiction a decade ago. “I have the madness of a human being,” says one patient to his unfeeling judge. These poor souls know there’s no way home. Empathy isn’t a prerequisite to humanity. To mangle Harlan Ellison a touch, they have no ears, but we must scream. Waiting for the Barbarians

Divinely mannered and frequently hilarious, the films of Eugène Green seek to impart that lesson, of the simplicity of kindness, of forgetting one’s pride. He references biblical stories and renaissance art and architecture to show how long people have been searching for answers to these questions. His latest, the theatrical exercise Waiting for the Barbarians, is one of his most direct approaches to the subject of empathetic response to circumstances beyond our control. Six people arrive at a kingdom looking for shelter before the arrival of ‘the barbarians.’ The night they spend inside the king’s domain will change them all. It’s maybe a little less profound and engrossing as some of his more handsomely mounted and lengthily plotted prior work, but the jokes about sex and iPhones more than make up for that. A neat anachronistic hodgepodge that only Green would have ever dared to write, it’s by turns thoughtful, lovely and deeply funny, exactly the sort of palette cleanser you’ll need after something as necessarily hopeless as 12 Days.

And all this is wonderful, don’t get me wrong, but a centrepiece is a centrepiece for a reason and the selection committee picked a humdinger. Mathieu Amalric’s beady eyes, handsomely grizzled features and perpetual nervousness have wended their way across international cinema for the last three decades, making him at once one of the most recognizable faces in cinema. I always breathe easier when his name’s on the cast list. His films as a director are less easy to get hold of but they’re worth the effort. His complex, understanding and loving vision of womanhood is exactly what you want from a male director. Barbara, in which Jeanne Balibar plays an actress playing a long-dead singer and Amalric plays her scatterbrained director (it continues to travel down the rabbit hole of Fellini-esque winking fantasy as it progresses), finds him once more in the delightfully busy mode he coined in his 2010 movie On Tour, one of the best movies about being an artist made during my lifetime. There and in Barbara, his frame is perfectly cluttered with incident and romantically posed figures, a way to externalize the creative process. Unlike On Tour, however, he finds silence and clarity away from the set in order to show off the particulars of Balibar’s multifaceted performance. He’ll find her singing by herself in a dark, empty apartment or on a bare stage, lit by arresting white light, and suddenly it’s as if the whole world has slowed down. That counterpoint in the mise-en-scene, between the mess and the cleanliness, like a Pixies song played by John Coltrane, is so enrapturing the movie could have been about anything. That it’s ultimately about Amalric’s trust and love for his lead actress makes this a classic in the making. Reader, I fell in love. The whole series was worth my time, but for giving me a new favourite, I’m in the society’s debt.