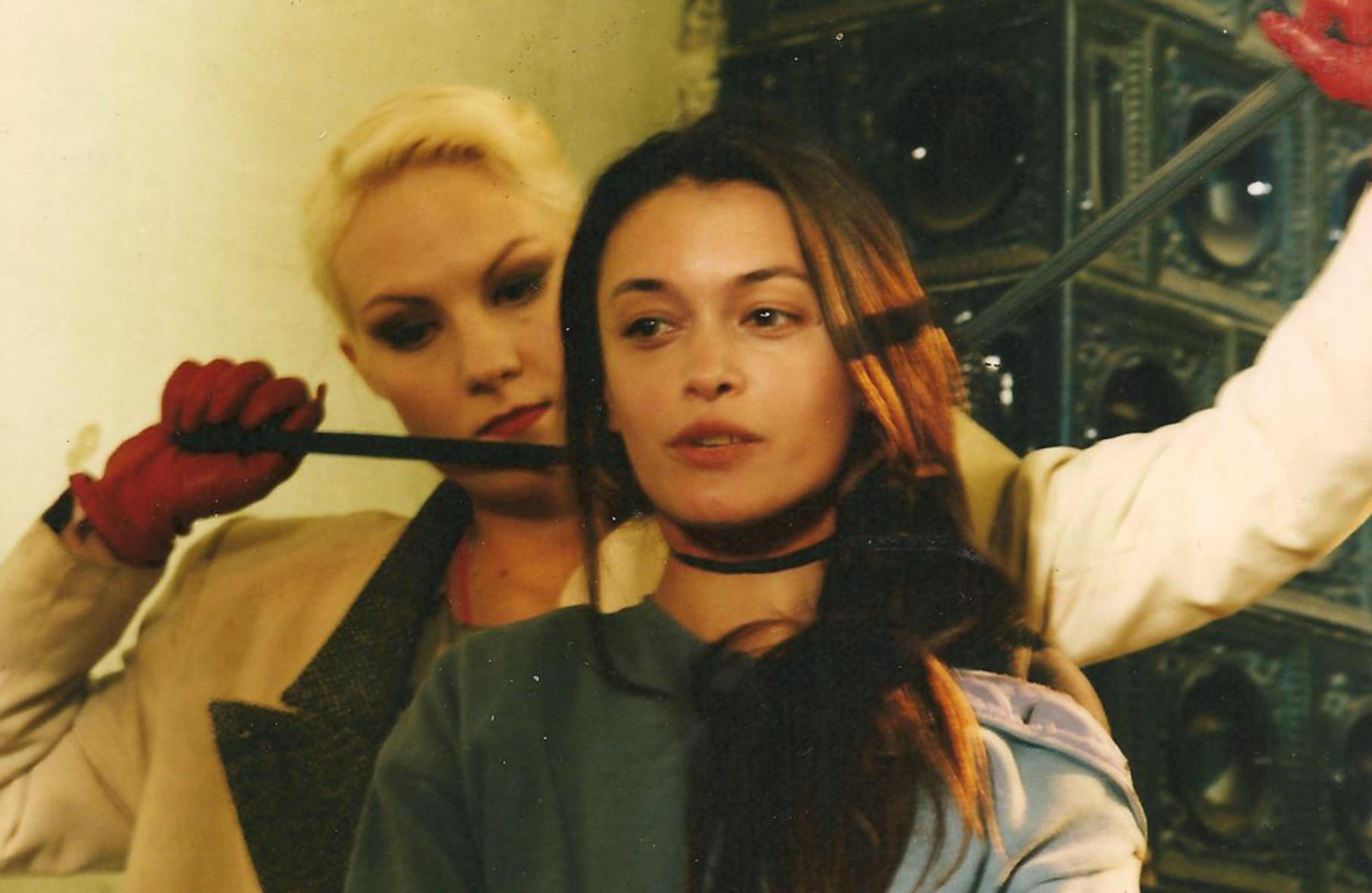 In the second of Muratova’s Three Stories (1997), all the main character wants to do is kill her mother. Ofelia (Renata Litvinova), creeps up on the character played by actress Aleksandra Svenska, while she is reading, perched on a lonesome edge of a dock. Ofelia plays with the older woman, taking her cane, leaning across her lap and fiddling with her hair. The latter accuses her of being a drunk. Though the mother doesn’t recognise her daughter, the viewer knows that Ofelia has waited a long time to take revenge on this woman, her mother, who abandoned her as a baby. Both women look somewhat similar, in red, with died blonde hair. Ofelia asks what her mother is reading and she replies that it’s a book of poems about Shakespeare’s Ophelia, whose death she finds truly romantic – “the kind of death one would wish for”. Thereupon Ofelia, starts to gradually force the woman, who cannot swim, into the water. At first she does it coaxingly, and at last with a final shove. As she watches her drown Ofelia laughs then strolls off up the boardwalk with her mother’s cane. This scene could well be a dream: but it could just as well be real. It’s a queer collusion of the character Ofelia, the abandoned daughter Ophelia and the mother, who ends up with Ophelia’s fate. When the mother realises she doesn’t want to drown after all it’s too late. Perhaps the tale is not such a fantasy after all.

Key elements of Muratova’s cinematic language are present here. The double. The repetition of an idea, repeating itself several times. The Chekovian way that the two characters in the two-shot have totally different motives right up until the end of the scene (incidentally one of Muratova’s later films was called Chekov’s Motifs). And language repeated – Ofelia repeats the word так (so) more than fifty times in the space of a minute like a naughty child, while trying to get her mother’s attention. The word takes on an odd, onomatopoeic quality, foreshadowing what is to come. Add to this the previous scene, which occurs between two very old women who are mother and daughter, and the fact that Aleksandra Svenska was herself an orphan, and you have a thickly weaved tapestry of rhythmic and rhyming repetitions.

Just like this scene, a lot of things are surprising in Muratova’s work. She created her own cinematic language. But that language was not spoken so much as it was danced, “a dance”. For Muratova, this language must involve rhythm and rhyme. The rhythm can be created by the editing, the rhyme can be created in language, and vice versa. Muratova, who loved the editing process and christened it “divine”, was an expert in creating rhyme with editing. When asked by one of the actresses why one scene is repeated, she replied simply “it rhymes”, like in poetry, like in dance, like in all art: artificial but beautiful. But though a rhyme in a poem may be man-made, forced into place to sound beautiful, it doesn’t sound any less natural. It is so with Kira Muratova’s musical cinematic language. There are many aspects of Muratova’s cinematic language but here I will concentrate on repetition, and how this renewal makes her films great to watch even in 2019.

She was born in 1934, in Soroca, which was then in the Kingdom of Romania and now is in Moldova. Today the city is located only a few kilometres away from the present-day Moldova-Ukrainian border. The question of whether Muratova is a Russian director or a Ukrainian one is also somewhat bombastically circular and repetitive: she makes most of her films in the Russian language, but nearly all of them were filmed in Odessa, but Odessa was historically Russian, and so it goes on.

She started making films in her twenties and made her last film in 2012. She made her first films, By the Steep Ravine (1961) and Our Honest Bread (1964), with her first husband Aleksandr Muratov, whose name she adopted. She soon branched out on her own. Her career of dedicated filmmaking spanned not only decades but also many changes in her homeland. Despite all of this, she never gave up doing what she loved best: “I do exactly what I know how to do and what I’m good at”. She weathered personal (divorce, the death of a child), professional (censorship of many of her films, demotion from filmmaker to librarian) and political hardships throughout the years (even near the end of her life she supported the Euromaidan protests and called for a pacifist Ukrainian revolution). She died last year at the age of 83, having made 44 films throughout her lifetime.

Brief Encounters (1967) is delightfully Hitchcockian, a dark film with romantic twists and turns which keeps us enthralled. The first film she made alone, it sets the scene for the way that rhyme and rhythm play a big part in her oeuvre. The guitar of the film’s antihero, is played and listened to over and over again. The ticking of the clock we hear while the two women who love him wait for his return becomes like the sound of a metronome: keeping track of time for a melody that will never be played. For me, her undeniably best film is Long Farewells (1971). With this film, Muratova would enter into another dance, this time with Soviet censors, whom she displeased. This film was shelved until 1987 and cost the Ukrainian minister of cinema and the director of the Odessa film studio their positions, it also led to Muratova being demoted to librarian and later transferred.

Among Grey Stones (1983), is a Soviet drama. The film follows a young boy, Vasya, who finds a group of vagabonds living in an abandoned castle. His family, who live in a big mansion on the hill, speak a language of grief and denial, his father is mostly featured rushing through rooms again and again, unable to reach any destination or find comfort. On the other hand, the vagabonds literally speak in children’s rhymes, albeit creepy ones. Small morbid rhymes about how if the child has no one to play with, he can play with a rat (one of the vagabonds having created a doll out of a dead rat) The little girl who befriends the boy grows sick and repeats her words over and over again, which builds up tension for the climax. Unfortunately this film was so heavily censored by the authorities that Muratova refused to release it under her name.

In Asthenic Syndrome (1989), there is a lot of discrepancy in the sound. During the first few minutes, the sound and the image are completely at odds, which sets the tone for this odd film. A recently bereaved woman is acting strangely after her husband dies, she pushes people in the street, then insults them. Her voice is exaggerated, as if to make fun of the idea of hysterical women. Then suddenly the film shifts, and this shift is signalled by applause. We realise that we have just seen a film and the main actress comes onto the stage.

There has been a surge in interest in Muratova’s films since her death in 2018. There have been numerous retrospectives of her work around the world. Though many of her films are hard to find, it is worth trying to watch as many as possible. I’ve highlighted a few examples of repetition in Muratova’s cinematic language but I think one of the best is an anecdote shared by Eugénie Zvonkine at a conference given at the Cinematheque in Paris during a retrospective of Muratova’s work. Unable to choose one of two actresses she liked for a role, Muratova cast both of them. And both acted in the scenes which were written for one character, at times they took turns to say the lines, and at times uttered them together. Kira Muratova is no ordinary filmmaker. The incident which I repeat here is special because it is about how not only cinema but also filmmaking can inspire joy.

This Essay article was published in November 2019