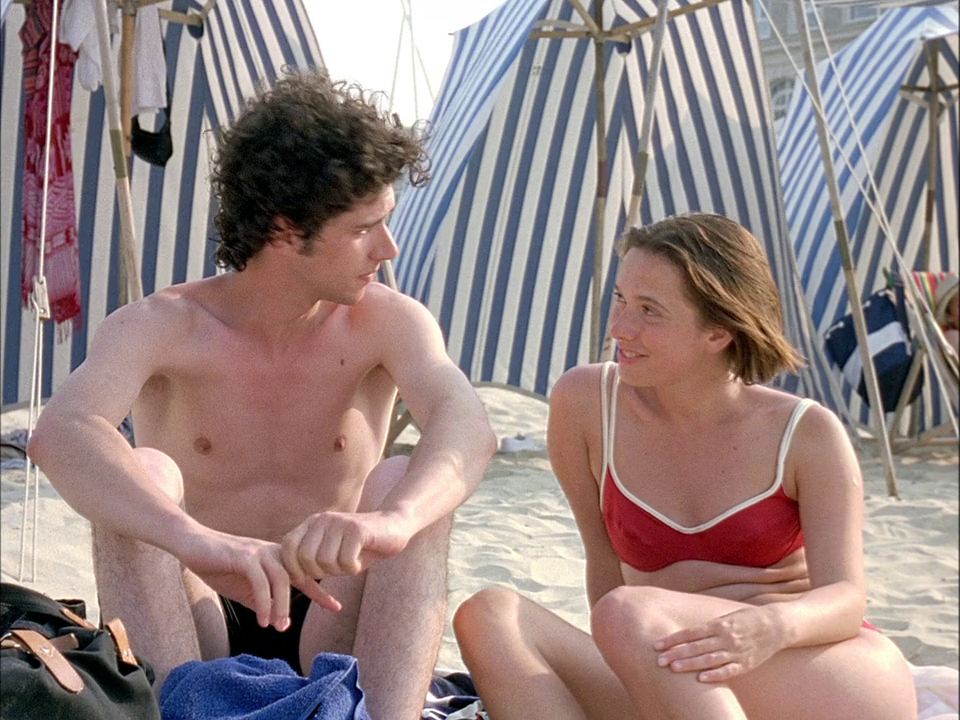 After winter comes… summer? At least, it does in Eric Rohmer’s Tales of the Four Seasons. In which the second of these four films, the slightly more serious A Tale of Winter (1992), was followed by the quite sunny A Summer’s Tale (1996). This third entry in the series was in some ways a very personal film for Rohmer, though on the surface it might seem like just another typical Rohmer film. Bram Ruiter and Kaj van Zoelen delve into the cascading waves that roll onto the shore in the background of the film’s beach resort setting.

Kaj van Zoelen: After not being entirely happy with A Tale of Winter, I was delighted with A Summer’s Tale. To say it is a return to form would be silly, considering how consistent and constant Rohmer’s output is (plus he released two films in between these). But in some ways, it is a return to both an older and younger Rohmer. Older in the sense that it’s been quite a while since he made a film with a male rather than a female protagonist, and one that is reminiscent of the hesitant doubter from A Night at Maud’s (1969) at that. Younger in the sense that this young man going by the name of Gaspard, who has to choose between three prospective female love interests, is partly inspired by events in Rohmer’s adolescence, which he “carried with him for a long time.” So naturally, Melvil Poupaud plays Gaspard as Rohmer, copying gestures such as the way Rohmer rubs his hands or bites his lip, and even sometimes dressing the same as him on set. It’s a real insight into the shy, slightly awkward manner which Rohmer is known for, and knowing the story is based on his own experiences, an insight into his formative romantic experiences. His hesitancy here, his posturing and empty, near nonsensical philosophising accounts for so many characters and storylines in his subsequent career. For this alone it would be a must-see for any Rohmer fan. But besides that it’s also a delightfully silly romantic comedy that’s hardly romantic at all.

Bram Ruiter: It also marks the first time we can discuss Diane Baratier, who Rohmer first had hired on The Tree, The Mayor and The Mediatheque (1993) three years prior after his go-to cinematographer Sophie Maintigneux had moved on from the low-budget, student-like sensibilities. Baratier had worked under the wings of cinematographer Raoul Coutard, but had yet to lens anything feature length herself. Rohmer apparently really liked the idea of taking on a novice to lens his films, so that these low-budget, student-like sensibilities could continue to be explored. And even though we’re now three Baratier lensed films in and smoothly gliding across beaches in the many dolly-shots that make up A Summer’s Tale, their knack for this very particular raw aesthetic (or as Rohmer would prefer: amateurish) shines bright like a diamond. It is Baratier’s eye that is what I think of when I think of what a mid-to-late career Rohmer looks like. There’s a deliberation in the naïveté on display here that gels so well with the world of the young and therefore often searching characters. In short: it’s beautiful and it’s no wonder that Rivette (the king of the amateurs) counted Rendezvous in Paris (1995), which was Baratier’s second credit as a cinematographer, as his favourite of Rohmer’s.

KvZ: I’ll be honest, I didn’t really notice the cinematography here, except for that long tracking shot of the dramatic argument on the beach between Gaspard and Lena, the girl who he waits for most of the movie, but quickly breaks up with after her arrival. Neither did this feel as loose and free as Rendezvous in Paris. And despite all his work with non-professionals, both in front of and behind the camera, I never really think of Rohmer films as amateurish at all. Especially at this point in his career, he couldn’t come across as an amateur if he tried. Never would I associate A Summer’s Tale with a student-like sensibility – everything comes across as far too precise for that, especially the very typical plot, even the spontaneous surprises feel like they were meant to be. Which all makes sense, considering how personal Rohmer considered the film to be, and how much it was based on his own experiences. It does feel very youthful, and that’s perhaps unusual for a film by a 75-year-old. Then again, don’t old directors often make films about their own childhood?

BR: A young filmmaker longs for the grand, bustling sets full of many moving parts. They perceive this as the epitome of their craft, their white whale. Even if Rohmer never aspired to such degrees of production value, he did start to relish the idea of ‘the amateur production’. Which of course is not actually amateur, but simply romanticises the naïveté of an early-career production. I mean, he’s still at the top of his game. But it’s that youthfulness and looseness you describe. I find it an absolute joy to see him, at this stage in his career, aggressively downsize in order to build it back up from nothing. And Baratier unlocked that potential for the amateur for him, I feel. A new start, so to speak. And he makes it look so easy and so much fun. Hence I wanted to bring it up, because this whole era is super interesting from a productional point of view. But also structurally there’s a contagious effortlessness on display. A you blink and you’d miss it type of story, perpetuated by the breeziest of breezes. What do you think? Is there more than meets the eye? And, at this point in his career, should there be? What if there’s no philosophical undercurrent and this is just Rohmer toying with the shape of his films?

KvZ: I’m not sure that there is much more than meets the eye. He’s just stretching his legs a bit, doing some exercises in that breeze. And that’s alright, not only because he indeed has nothing to prove anymore and an incredible body of work, but also because the result of that exercise is so delightful. And yet, I keep getting stuck on his claims that this is one of his most personal films. How personal does that make some of his other, similar films? Should something supposedly so personal not be more substantial? If his claims are true, Rohmer’s adapting formative events of his life that would become the blueprint for many of his films throughout the 60s, 70s, 80s and 90s. If there’s nothing more than meets the eye, then what is he saying about his entire oeuvre here? Or is the passivity and the waiting Gaspard does here, even going so far as proclaiming he’ll not come into his own until he reaches 30, a sly commentary on how Rohmer himself was a late bloomer, that all the riches only came later? And that now, in his old age, he’s reaping the rewards of those riches and just enjoying himself, remembering the folly of his youth?

BR: And in a way it feels like an inverse of A Tale of Springtime (1990), another Rohmer we struggled with. But whereas Springtime reached out and tried out new ideas, Summer sits comfortably still. It’s far less interested in the theoretical and much more in the emotional, even if its characters are theorising around in order not to feel. You brought up My Night At Maud’s, which shares a similarity in character, and I think Maud’s inclusion into this discussion is more apt than I initially took it for. As you said: Rohmer is returning to his youth, but also to formal shapes of the past. The downsizing of this production, his retreading of familiar grounds, it’s not nostalgic per se, but more reflective. Creating an object that resembles an object of the past is a great way to gauge where you are and who you are as an artist and as a human being. And so I think the questions we have are the same questions Rohmer must’ve had, but without the inclination of answering them. Summer reads like a Greatest Hits collection because I think it is and is intended that way: not to spike sales and buy a new pool, but as a reflective milestone in a long career that’s nearing its end.

This Conversations Essay article was published in June 2021