Space – Above and Beyond: Dissension in the Ranks 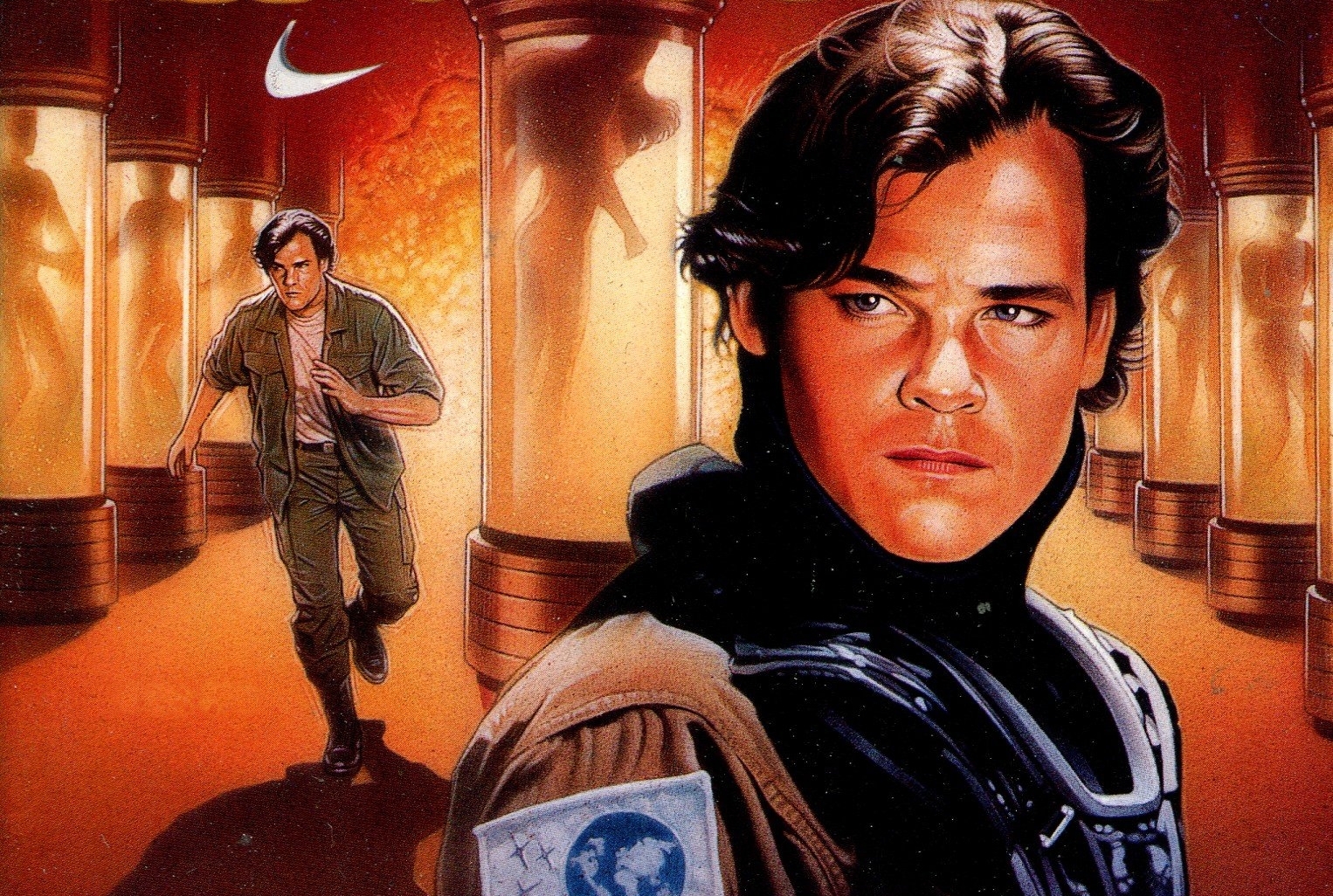 Growing up in the 90s meant a weekly dose of The X-Files (1993-2002). This popular television-series, with FBI-Special Agents Fox Mulder (David Duchovny) and Dana Scully (Gillian Anderson) has since acquired a somewhat iconic status (proven by no less than two feature film releases). Originally conceived by Chris Carter, The X-Files also counted Glen Morgan and James Wong among its many producers. Morgan and Wong fostered other TV-projects as well, one of them being the woefully overlooked SF-television series Space – Above and Beyond (SAB) (1995).

Based on the TV-series Combat! (1962-1967), which followed a US frontline infantry squad during the liberation of Nazi-occupied Europe, SAB transposed the former series WWII-setting to a point in the not-too-distant future (ca. 2063), and outer space.

The series centred around the adventures of the members of the 58th Squadron of the United States Marine Corps Space Aviator Cavalry, better known as the ‘Wild Cards’. Lead by stoic Lt. Col. Tyrus Cassius McQueen (James Morrison), the ‘Wild Cards’ were deployed battling a mysterious alien species called ‘Chigs’. These were responsible for a brutal attack on the Vesta outpost on Tellus, a planet that was being colonized at the time by an expedition team from Earth. This act of aggression sparked a fierce, all-out war between the two races, which was fought in outer space and on the surface of numerous, Chig-infested planets.

As a rule, SF-series reflect the times in which they are made, and SAB forms no exception. Four years after the First Gulf War (1990-1991), in which American forces set out to liberate Kuwait from Iraqi invasion and annexation, the legitimacy of the war was still widely questioned in America. This moral ambiguity strongly influenced the SAB-series, in which monopolistic aerospace- and defence supplier, Aero-Tech, serves as SAB’s embodiment of the military-industrial complex. Not only is the multinational corporation affiliated with both the armed forces and the UN, it furthermore persistently follows its own nefarious corporate agenda through the acquirement of political power and the control and deployment of advanced technologies.

As a result, the ‘Wild Cards’ found themselves often at odds with Aero-Tech officials, even when this ran contrary to their orders. The 58th Squadron’s collective sense of justice repeatedly forced them to dissent from Aero-Tech and Colonial High Command, and choose insubordination over carrying out morally reprehensible orders. These conflicts put the team-members under great personal strain, and often damaged their careers, but were shown to be necessary and courageous, ending in the emergence of the marines as moral victors.

Finally, Aero-Tech’s corruption became evident when the corporation proved to be responsible for the Chig attack on the Vesta-outpost on Tellus, and therefore for the war between mankind and the Chigs that lay in its wake. Colonization of Tellus, funded and coordinated by Aero-Tech, threatened sacred Chig breeding grounds located on the planet, the existence of which was known to Aero-Tech. So as troublesome, risky and steep the moral path was that the ‘Wild Cards’ often chose to take, they were invariably proven right in doing so. A fact that producers Glen Morgan and James Wong undoubtedly meant as a comment on the Gulf War, and the necessity to break free from corrupt power structures.

This critical attitude towards the misuse of political and military power SAB shared with the later Battlestar Galactica (BSG, 2003), a reboot of the popular eponymous SF-series (1978-1980). SAB preceded the reboot both visually and thematically, as BSG is very much a product of post 9/11 America and its ensuing ‘war on terror’. In its wake lay not only political and social upheaval, but also fear and mistrust, of the faceless enemy that threatened America, but also of the political and military machinations that fuelled the war. BSG reflected these concerns.

Star Trek – The Next Generation

A major influence on both SAB and BSG formed the SF TV-series Star Trek – The Next Generation (TNG, 1987-1994). First of all, through the use of computer-generated imagery (CGI), which proved instrumental in the advancement of CGI-technology for television productions. In both SAB and BSG computer-animated effects were given higher production values, resulting in an even more realistic technological universe, intensely filmed dogfights and vast space-battles.

Secondly, the presentation of advanced technology and its ensuing dilemma’s and dangers in Star Trek – TNG also left an indelible mark on SAB and BSG. Everyone familiar with TNG will remember android Lt. Commander Data’s deep-felt desire to be human, and the predacious cyborg race called The Borg. These half-human hybrids of organic matter and technology were governed by logic, and deemed their fusion of man and machine superior to all other lifeforms, resulting in the Borg’s ruthless assimilation of other species. SAB also introduced a sinister android, Borg-like race called ‘Sillicates’. They were the result of the fusion between artificial intelligence and organic matter, but designed to serve as slave-labour and artificial soldiers. Stricken by a computer virus, through which they developed self-awareness, the Sillicates started a revolt against the humans which designed them. In the long ensuing war the artificial beings hijacked some spacefreighters and took to the stars. They re-emerged as mercenaries, fighting alongside the Chig forces in the war against mankind.

BSG‘s reboot also gave rise to a new type of threat: the human Cylon. This not only indicated the technological evolution from which these beings sprang, but also the deeply felt fear, after 9/11, that the US had been infiltrated by a fifth column of sleeper agents, ready to disrupt and destroy American society at any given moment. This fear undoubtedly lay in the fact that the Al Qaeda terrorists that had carried out the attacks on NY and Washington had been living and working in America for years, quietly preparing their actions. America’s enemies, it seemed, were not only hellbent on its destruction, but also close-by and indistinguishable from any other citizen. The fear and paranoia that spread as a result of this had been the main focus of earlier films such as The Stranger (1946), The Woman on Pier 13 (1949), The Manchurian Candidate (1962; 2004), The Parallax View (1974), Telefon (1977) and, more recently, The Siege (1998). Following the 9/11 attacks, this fear seemed more than justified and the danger all the more real, since America’s enemies wore familiar faces. Just like BSG‘s new adversary: the Cylon 2.0.

Through the back-stories of individual characters Space – Above and Beyond proved an effective platform from which to comment on scientific and social issues already touched upon in Star Trek – TNG, such as cloning, artificial intelligence, race, class society and unbridled capitalism and militarism. For example, Lt. Cooper Hawkes and Lt. Col. T.C. McQueen were ‘In-Vitroes’, artificially grown humans, meant to re-supply the depleting ranks of Colonial soldiers in the war against the Chigs. In-Vitroes did not share social equality with naturally born humans because of their artificial origins, but were instead regarded and treated as slaves, devoid of a free will. They were derisively called ‘tanks’ by humans, describing not only their method of birth in gestation tanks, but also their disposable nature, i.e. the ‘tanks’ that open the way for the infantry are the first to go into battle, and therefore casualty-rates among tank-crews are usually high. So the In-Vitroes were not just meant to showcase the technological results of cloning, they also served as a narrative device to discuss discrimination and segregation within our society. Furthermore, Commodore Ross (Tucker Smallwood), Lt. Paul Wang (Joel de la Fuente) and Lt. Vanessa Damphousse (Lanei Chapman) were all dark-skinned, indicating that racism and discrimination have no place in any society, present or future.

Robots and Clones ‘R’ Us

Characters such as ‘In-Vitroes’ and ‘Sillicates’ may seem somewhat hamfisted to mature audiences nowadays. Their presence in SAB served to comment on scientific and technological developments (cloning, AI, robotization) that were then cutting-edge, but that are no longer the stuff of science fiction. After all, the implementation of these technologies into our everyday life is simply a question of time. Of course cloning had been addressed before in films like The Boys from Brazil (1978) and Jurassic Park (1993), just as the creation of artificial intelligence and smart robots, whether or not in human form, served as an important theme in films such as Demon Seed (1977), Blade Runner (1982), The Terminator (1984) and Ghost in the Shell (1995). But in these productions robotics and AI are largely presented as isolated (and often menacing) examples of our scientific hubris. Apart from Ridley Scott’s epic Blade Runner and Star Trek – TNG had artificial intelligence and humanoid robots more intelligent than their masters never been presented as an integral part of human society in the near-future. SAB was among the first SF television-series to present this as a credible reality, and in so doing formed the basis for productions such as The Matrix (1999), Artificial Intelligence – A.I. (2001), I, Robot (2004), Real Humans (2012), Chappie (2015), Ex Machina (2015) and Westworld (2016).

In regards to Westworld, HBO’s latest blockbuster, it must be said that although its origins lay further back in the past (Michael Crichton’s eponymous SF cult-classic from 1973), the plot of the series is very much the result of an evolution that was largely determined by series such as SAB. Whereas the original film served as a cautionary tale against the dangers of advanced technology (hard to understand, impossible to control), the recent TV-adaptation presents intelligent robots as insurgents, engaged in a fight for freedom from human slavery and oppression. A revolution that closely mirrors SAB‘s Sillicate-revolt.

Visually and thematically advanced as SAB certainly was, the series unfortunately suffered from poor TV-ratings. This was largely due to ill-chosen broadcast-scheduling by Fox Television, and the mature and complex nature of both story-arcs and characters, which went far beyond the patriotic flag-waving of more conventional series. Ultimately, SAB was cancelled by Fox Television after its first season in 1996, although it had originally been scheduled for five. Since then, the series has been released on DVD in numerous countries, and has also been published in novel and comic-format.

Although hopeful rumours regarding a second season of SAB frequently circulate on the internet among the sizeable fanbase, these seem unlikely ever to be realised. Regrettably so, since Space – Above and Beyond conclusively proved, even in its short-lived existence, that SF-televison really can (and indeed, should) address mature themes for a mature audience.

This Essay article was published in February 2017