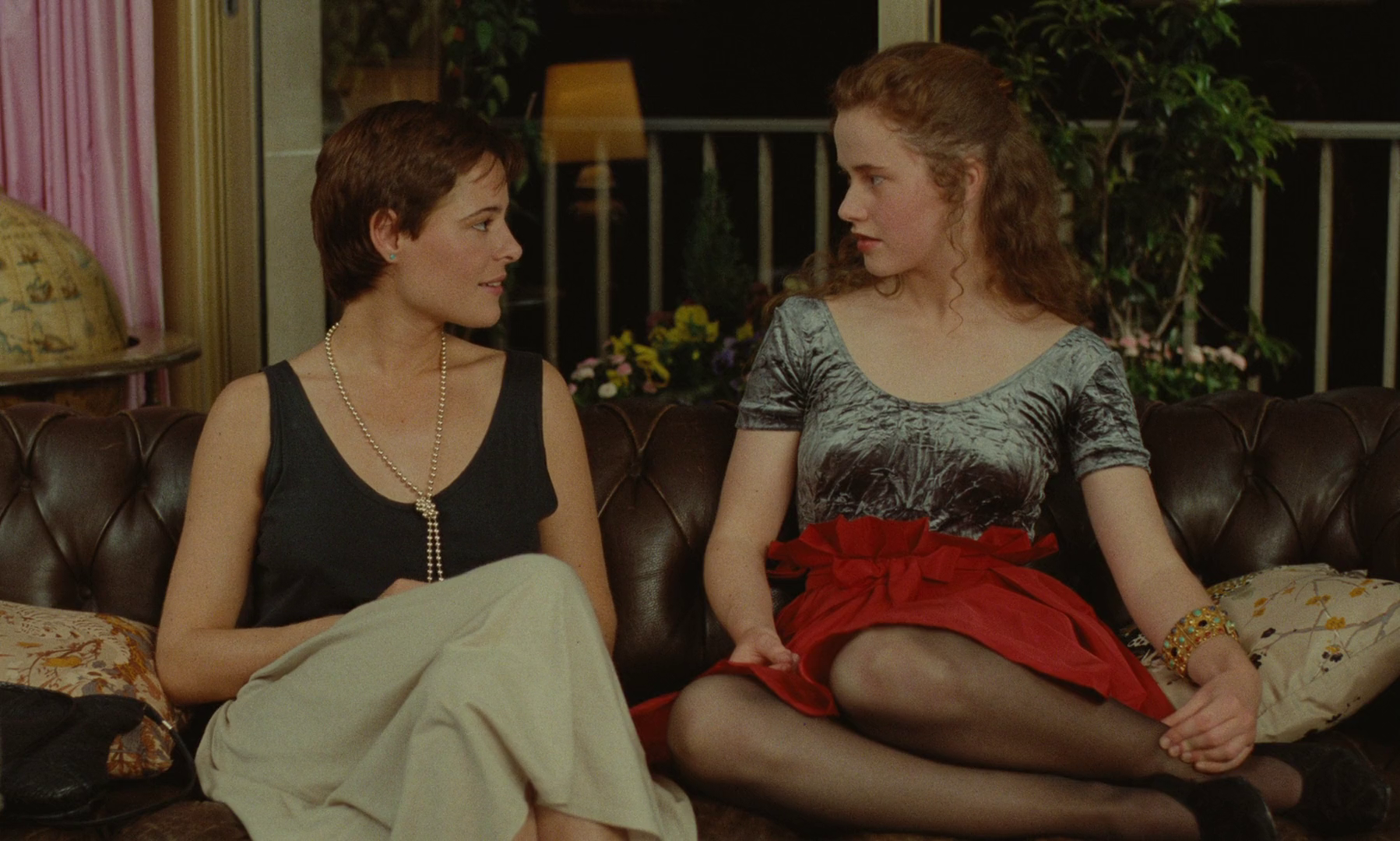 Eric Rohmer is mostly known for his film cycles. Firstly for the Nouvelle Vague-cycle Six Moral Tales, with which he made his name in the 60s and 70s. Secondly for his 80s cycle of Comedies and Proverbs. Yet, his third cycle of films made in the 90s, Tales of the Four Seasons, has been far less discussed and written about (at least, in English-language media). Bram Ruiter and Kaj van Zoelen aim to change that by discussing these four films, starting with A Tale of Springtime (1990). Not in the least because for them it is also a journey into the relative unknown, after the familiar preceding decades of Rohmer’s filmography. Join us, won’t you?

Kaj van Zoelen: A Tale of Springtime at times feels like a continuation of the previous decade for Rohmer. There might not be a proverb at the beginning, and tonally it’s less overly comedic or ironic than a film like My Girlfriend’s Boyfriend (1987). Yet it is another tale of young women in Paris, whose minor foibles have a major impact on the way they live their lives. They have a particular philosophy, tied up in elemental emotions as much as in intellectual overthinking, which they stick to. Which sometimes sees them through, and sometimes hurts them (or exposes the shortcomings of those close to them). Sometimes it propels the story forward into either unexpected or entirely predictable situations, at once both overly complicated and deliciously simple. This one just happens to take place in spring. Would you agree, or does this feel more like the start of something wholly new to you?

Bram Ruiter: To me, this feels like a transitional piece. Whereas the previous decade we saw him hone his unique production cycle through lightweight, youthful comedies, A Tale of Springtime is, like you said, neither ‘80s nor ‘70s Rohmer. Or, I would argue: it’s both and, because it is a first step in this ‘all of the above’ direction, it’s also not entirely either. It lands somewhere in-between, making it an odd piece in his oeuvre. I recently watched The Tree, The Mayor and the Mediatheque (1993), and even though that film and Springtime feel similar, the former has a sophistication to its execution missing in the latter. And the central issue here, for me at least, is the relationship between the student and the teacher in regards to where the plot is headed. The age-gap between the two feels significant, but is not treated as such. Of course this is Rohmer’s structural playfulness. He’s having fun recontextualising our preconceived notions of such an age-gap. But without the apparent lightweightedness of the previous decade, his intellect takes centre stage. This makes the journey to the climax kind of a drab undertaking, while the climax itself feels like a stretch and in that even a little preachy. And so, unlike The Tree, The Mayor and the Mediatheque, it does not reveal itself upon further investigation, yet it is presented with an air that it should. Does this make any sense?

KvZ: I wouldn’t call any part of the film a drab undertaking, but that does make sense. The conclusion with the necklace for instance, feels like it could come right out of something like A Good Marriage (1982). It’s quite silly and farcical, but the story it resolves doesn’t really have that playful tone, or at least much less so. As you say, the intellect takes stage, partly in the form of lengthy philosophical discussions. Of course lengthy discussions on love, life and how to traverse these are a hallmark of Rohmer throughout his career, but the specifics here felt different to me. More like my least favourite part of Godard films, when a bunch of philosophers/authors are name checked in quick succession, and it’s all a priori this and synthetic judgement that. I have to admit I got quite lost, and the film lost me for a moment. When the student gleefully asks the dad (her boyfriend) if he knows what she’s talking about, I kinda wanted to shout “no” at the screen. Still, the young women being too intellectual for the older man is better than the opposite that often happens in, say, Woody Allen’s films. Which brings me to the age gap you mention, I’m curious to hear more why you feel specifically the gap between the student (Eve) and the teacher (Jeanne) is so significant? I’m not sure there is that much of a gap, which Jeanne points out when Natacha says she’d prefer Jeanne to Eve as her father’s lover?

BR: It being an age gap was something I picked up on (and possibly misread) in a scene where Natacha probes Jeanne about meeting Natacha’s dad. Jeanne is quick to respond that she understands why young women fall for him, with which she tries to separate herself from that group of young, impressionable women, elevating her age. But maybe the gap isn’t age, but rather their contrasted maturity. I don’t see any commonalities between the two. I don’t see any reason why they would be friends or even friendly. Sure, there’s the chance of a good night’s sleep, but there’s nothing in Jeanne that’s curious about her living in a stranger’s house beyond that initial night. Jeanne does return to her own flat, which she sub-letted to her cousin, and throughout the week shows a need for her cousin to move out so that she can return to her normal life of going between her own place and her boyfriend’s. The latter flat makes her seethe with hate because she’s unable to deal with his untidiness in his absence. She is, as she tells Natacha when they meet, virtually homeless. But then why settle for Natacha? Doesn’t she have other friends? Is it sheer convenience? Is it Natacha’s Parent Trap-esque scheme? Then, if it is, what is the significance of pulling the rug out underneath this perceived scheme? Nowhere do I see any curiosity from Jeanne, nor do I understand why she keeps engaging with Natacha if it’s simply about having a place to sleep. Now let me be clear, I agree with whoever said that there’s nothing as crazy as a well-motivated character, but I fail to see what Rohmer’s curiosity is here, either. All of the script’s movements feel too calculated, in order to keep this unlikely friendship afloat rather than to explore the possibilities of Jeanne’s situation. It’s like watching a game of chess where the outcome is left undecided because the opponents got distracted by their discussion of Plato’s ring. Which, come to think of it, sounds very much like a film Rohmer would make.

KvZ: I would probably really enjoy that film. But, I got confused because I thought you meant the other student, Eve, Natasha’s dad’s lover. Who is either Natacha’s age or only slightly older. You’re quite right, because even if the age difference between Natacha and Jeanne isn’t pronounced explicitly, Natacha certainly comes across as much younger and far less mature – both in appearance and attitude. If anything, Jeanne seems like a detached observer, who secretly enjoys Natacha’s antics while ostensibly being offended by them, at least by her attempts to set up Jeanne with her dad. To me, she comes across as someone a bit adrift, not just between apartments but in life, despite having a good, secure job she enjoys. She seems to love her boyfriend, but can’t stand the thought of living with him, and he’s entirely absent from the film. She lends her cousin her own apartment, and when her cousin keeps finding reasons to stay, she immediately insists her cousin stay for a while longer. This happens twice, over the initial protestations of her cousin. As if she wants to stay adrift and uncertain for a while longer, afraid of the settled life a stable home of her own would bring her, or return to her. I think that is why she’s so willing to stay at Natacha’s for a while, including the weird architectural flourishes. Natacha’s life is more open ended and in flux than her own, but Natacha already has firm convictions of what life should be like, possibly reminding her of herself not too long ago. Or perhaps I was reading too much into that long take centering increasingly on Jeanne listening to Natacha play piano on the first night they meet. She ultimately views herself above all the petty squabbling Natacha engages in, and rejects the particular drama of her life, which is why it’s only fitting that she resolves that drama by finding the necklace that started it all. It’s as if by doing so, she accepts the direction her life had been taking for a while, that she had been putting off by staying with Natacha. Or am I way off?

BR: I think you’re right on the money. It’s almost as if Jeanne is trying on different hats in an environment that is of little lasting consequence. Like you said, Natacha reminds her of herself and so does Eve. But now that they’re right there in front of her, she has a chance to observe those versions of herself and through that find a way forward. And this theoretical framework to navigate life does fit her personality, because she is an academic after all.

I also wanted to bring up that shot of Jeanne listening to Natacha, so I’m glad you did. I think it was at the source of my reading of the film as a transitional piece: that slow forward motion, crawling closer towards Jeanne while she listens to the off-screen piano, lingering on her. It’s a quiet, emotional moment which is verbalised through a cinematic technique (the dolly shot). It is, in short, visually expressive filmmaking and therefore very unlike Rohmer. As Jeanne, it felt as if, for just a fleeting moment, Rohmer was trying on different hats of his own. Having seen the two non-seasonal outings halfway into this quadrology, I know for a fact that he doubles down on his documentary approach to film production, so I’m not expecting him to give voice to a latent Tarkovsky lingering in his creativity. But as much as I was frustrated with A Tale of Springtime for being everywhere in-between (and not really anywhere), I also did really enjoy it as somewhat of an outlier in the oeuvre. And with that, I think we’ve, at the very least, figured out why there’s so little written about it.

This Conversations Essay article was published in March 2021