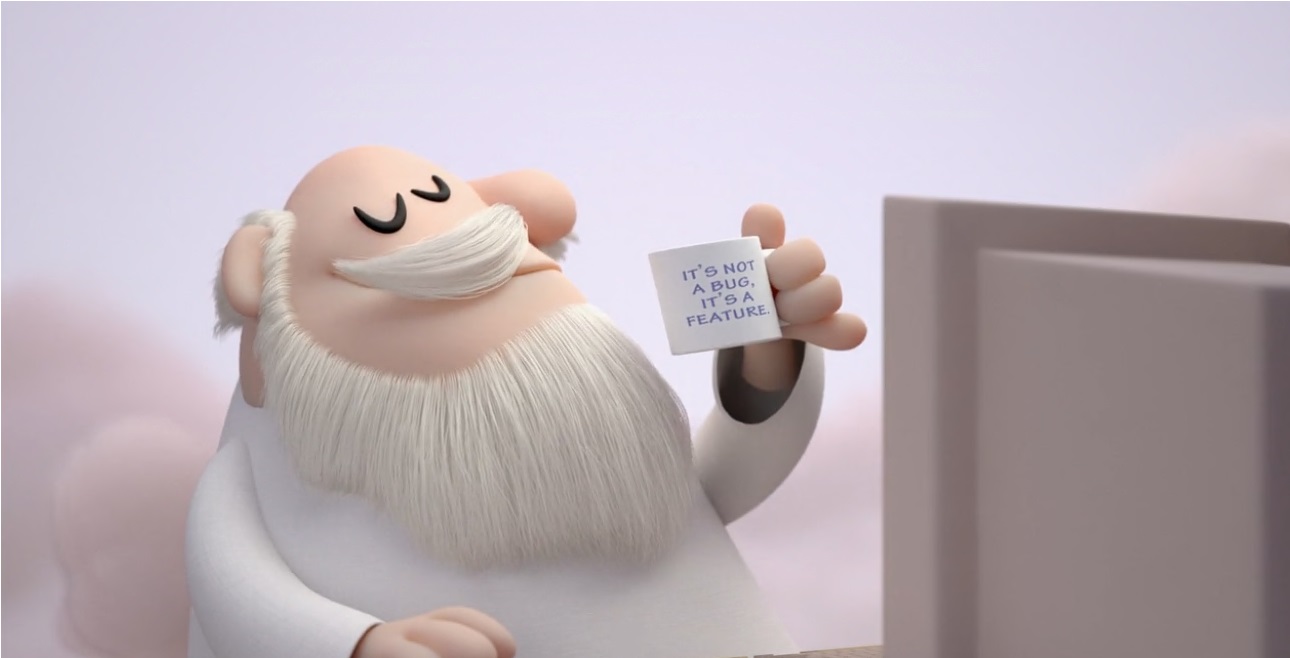 Tales from the Multiverse

One month ago, the International Trickfilm Festival Stuttgart (ITFS) decided to organise the 27th festival edition online instead of in a live setting. “Stay Animated, – Go Online with ITFS” is the festival’s slogan. From 5 to 10 May, a variety of feature and short animation films, interviews, workshops and talks will be available via de ITFS website. The festival offers a free streaming service from the Stuttgart Schlossplatz, but if you pay a small contribution you can binge-watch the complete festival program. Even if you’re interested in the international program only, this contribution is really worth it.

A little bit of humour is more than welcome these days. Tales from the Multiverse (2019) by the Danish directors Magnus Møller, Mette Tange en Peter Smith is a good starter. This funny 3D animation film shows how God, depicted as a small man with big round eyes, tries to create a new universe with the beta version of the computer software Multiverse. A fight between the devil and Jesus distracts him and makes him unable to intervene when an error pops up. His creation develops in an unforeseen way.

The Wings (2019) by the Estonian filmmaker Riho Unt is about Jaan, a character based on the books by the Estonian writer Eduard Bornhöhe. Jaan communicates with the ghost of Leonardo da Vinci, whose voice we hear in the voice-over. Jaan tries to fly and searches for a method based on Da Vinci’s knowledge. The project absorbs Jaan completely and makes him forget his wife Liisa. He even loses her in an unexpected way. Because of the clay puppet animation and the setting, a farm, The Wings is very reminiscent of the animation films of Wallace & Grommit.

In his humorous and socially critical film Deep Love (2019) the Ukrainian director Mykyta Lyskov studies human behaviour. The film is set in Ukraine, where the empty streets are covered with waste. The observations do say something about human beings in general as well. Not for nothing are the characters in this brightly coloured 2D animation film depicted as strange creatures.

We will not be able to make a trip to Stuttgart in the near future. However, the international program contains enough films to make a virtual trip at home. Watch The Dream Report (2019) by the Irish director Jack O’Shea for example, in which a man’s dreams and reality intermingle. While scenes set in reality mostly contain sepia colours, shades of black and red dominate in the dream sequences. The look of the film is a bit blurry and grainy, and together with the hallucinating repetitive soundscape, O’Shea creates a mysterious and dreamy atmosphere.

In Kantentanz (2019) by the German animators Camille Geissler and Elisabeth Jakobi, the inhabitants of a dark forest wake up by the light of the moon. Against a black background, animal-like creatures drawn in fine bright coloured lines appear, float and disappear again. A wind ensemble accompanies the fast transformations. Both the style of the animation and the music refer to the Opus films by Walter Ruttmann of the 1920s. Kantentanz is one of the films nominated for the Lotte Reiniger Award.

A real trip can be experienced together with the characters of Acid Rain (2019) by the Polish director Tomak Popakul, who has already won several prizes for this film. Acid Rain is about a naive young woman who runs away from home and falls in love with Skinny, a drugs dealer. Soon, Skinny shows his true nature which makes it hard for the woman to escape her plight. The bright colours, deformed images and irritating noisy soundscape mimic the effects of their drugs usage in a probing way.

A lot of films that stand out in the international competition, are films with a rather tragic ending. In the cartoonish animation film Cosmonaut (2019) by the Estonian filmmakers Kaspars Jancis, an old demented man relives his adventures in space from the time when he was an astronaut in his family’s home. The family members don’t pay much attention to each other and every time they leave the house, the old man empties all the cupboards. His actions and the recurring flashbacks alternate. When he has an accident, everything in the house starts to hover. Once an astronaut, always an astronaut.

In the stop-motion puppet animation film Sororal (2019) by the French artists Frédéric Even and Louise Mercadier, three sisters are warned about an imminent flood that will destroy their piece of land. Every sister deals with the threat and the approaching death in another way, which causes tensions. The grey shades of the barren landscape reinforces the tense and gloomy atmosphere. DOMUS (2019), a film made by the French director Dora Benouisilio observes an old couple that gets more and more forgetful. The interior of the house is drawn with a grey pencil, in the world outside, the colourful nature is flourishing. Inside, a web of threads develops in which the man and the woman get entangled and symbolises what happens in their heads in an awfully sad way. This film too is about the approaching end. And all that can be done is stand by and watch.

This Outdoors article was published in May 2020