Still not Happy Together? 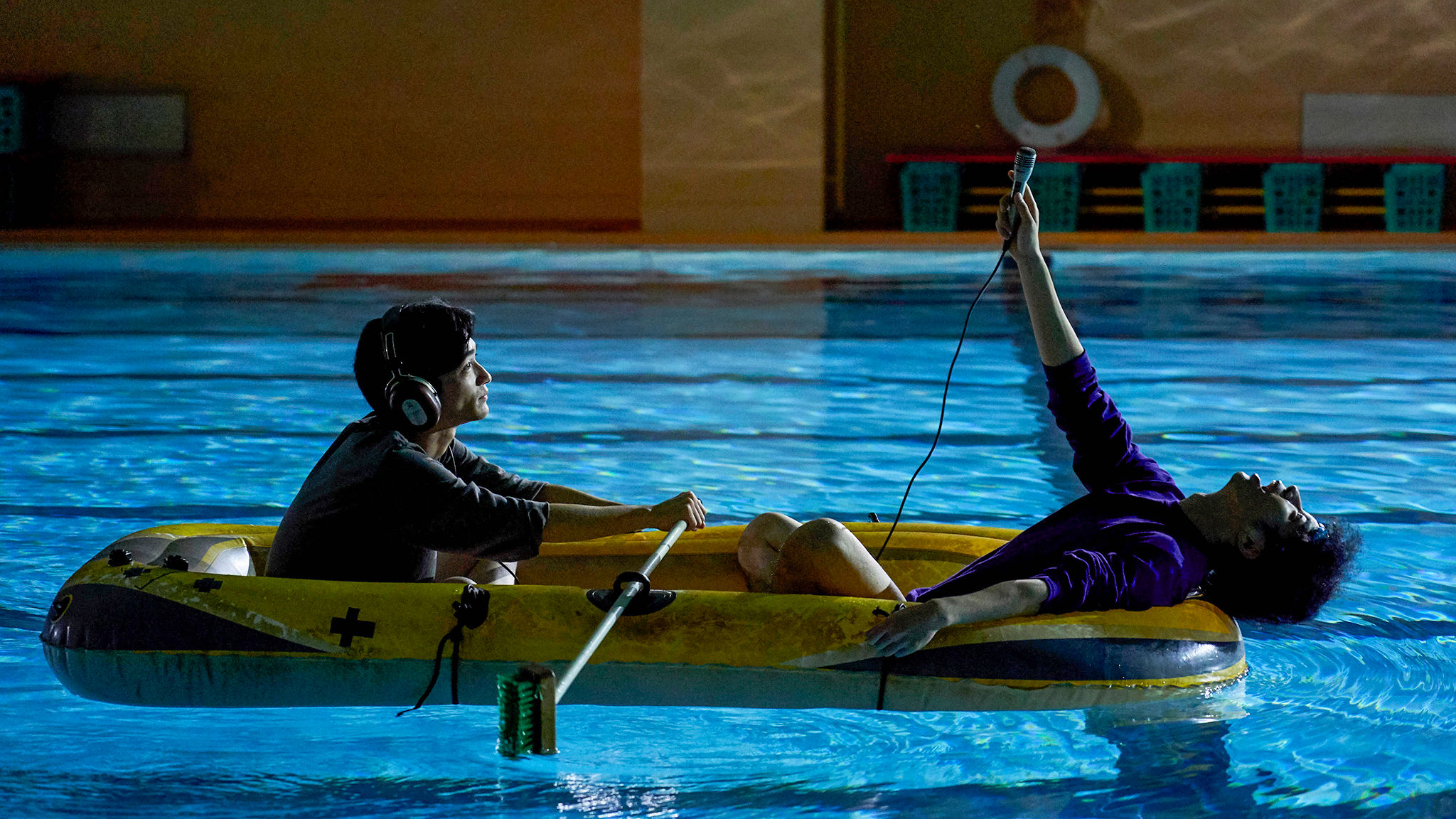 Due to corona measures IFFR 2022 was forced to go (mostly) online again. This meant many titles disappeared from the regular programme. That was also the case for Riho Kudo’s Let Me Hear It Barefoot (2021). Even though I don’t necessarily consider it to be a very good film, I do think it is a shame that it wasn’t shown on the big screen during the festival. Kudo uses sound design effectively and a theatre would definitely be the place to serve that aspect. Secondly, it has a queer narrative at its core. Many intertextual references to Wong Kar-wai’s Happy Together (1997) place it at an interesting point in the history of queer film.

The story revolves around two boys, Naomi and Maki. Naomi runs a second-hand shop for his father who has money problems and Maki takes care of the older, blind Midori. When Midori falls ill she asks Maki to travel the world for her with the money she’s got left. The money is by far not enough but Maki wants to grant her wish anyway and decides to fake his travels, making audio adventures of the stories he dreams up. He does so together with Naomi and during their attempts to recreate exciting journeys a certain tension between them becomes clear. However, Naomi doesn’t know how to deal with his feelings and the tension never translates to something else than wrestling games.

As early as thirteen minutes into the film the song ‘Happy Together’ by the Turtles is mentioned as is a film about a couple travelling to the Iguazu Falls. This makes it almost impossible not to have Wong Kar-wai’s Happy Together lingering in one’s mind during the film. But it’s not only the literal references, narratively there are also many similarities. The importance of sound is reminiscent of Chang Chen’s character who listens and records sounds in Happy Together. The inability of the main characters to talk about their feelings that leads to violent behaviour and an unhealthy relationship is also seen in both stories. While comparing the two Let Me Hear It Barefoot starts to fall short. However, instead of just putting the movies side by side and concluding that it doesn’t have, for example, the visual mastery of Wong doesn’t really lead to satisfying conclusions. It’s more interesting to ask how the film incorporates its queerness and how that differs from Wong’s movie made in 1997.

In a way Let Me Hear It Barefoot feels like several steps back. The characters, or at least Naomi, don’t know what to do with their feelings. They live isolated in their own little world of make-believe. Kudo doesn’t let her characters live in exile, like Wong might be doing by letting his characters leave Hong Kong for Argentina, but she does situate them in a world that seems to exist without interference from the outside world. There are just a few moments with people of the same age as Naomi and Maki. In a way, this makes Naomi’s behaviour even more unsatisfying. If there is a disapproving outside world it’s more of an unspoken looming feeling internalized by Naomi than something the viewer can truly discern in his surroundings.

At the same time, it could also be argued that in a sense the movie of Kudo is more overtly queer or, maybe more specifically, asking about what queerness means. While Wong’s characters are in a gay relationship the story is more just a story about a dysfunctional relationship than an inherently queer one. It might question what masculinity is by painting this relationship just in the same way as he would with a straight couple, but it’s not so much the characters struggling with those issues. The characters in Let Me Hear It Barefoot are more visibly aware of their feelings that make them ‘outsiders’. While they can’t yet talk about it eloquently and solve their problems accordingly, they are searching for a way to express their feelings in the world and place they are currently living in. In a sense, it gives the viewer more insight into their struggles as queer people than Wong’s movie does.

Eventually, the movie ends with a flashback that changes the perspective, especially when looking back at Happy Together. In the scene, Naomi sees Maki again after they have parted ways. They are both driving on the same road and meet each other’s gaze when stopping for a traffic light. Naomi then thinks back to their audio adventures. At first, it’s just the audio that drowns out the normal sounds while he drives again and starts to lose his composure. Then the screen changes to black and we the line “Sorry. We need to start over.” Not only does it place the viewer of the movie in the position Midori has been in all along, just hearing the sound, but it does also give the viewer the possibility to imagine a different future, a different take. Just like Naomi might realize at that same moment.

That idea of starting over is also apparent in Happy Together. Leslie Cheung’s Ho Po-wing asks to start over when he wants to rekindle the relationship between him and Lai Yiu-fai. By implicating that for Naomi and Maki another life or future is possible too, and by so strongly drawing parallels to Happy Together maybe we should consider movies and their stories as ways to start over just the same. All these stories telling another fragment of the experiences of marginalized people are a step closer to giving them the happy ending together. We as the audience can start over again when we discover a new film, with new characters trying to find themselves. While Let Me Hear It Barefoot might be less bold in its depiction of a gay relationship than a predecessor like Happy Together, its audience should be able to seek it out. To recognize themselves in the protagonists or not, and especially to have the choice to think of the movie what they want. It’s sad that IFFR wasn’t the place to do so. Because even if one can’t travel to the Iguazu falls, cinema should be the place where we can see and hear the whole world.