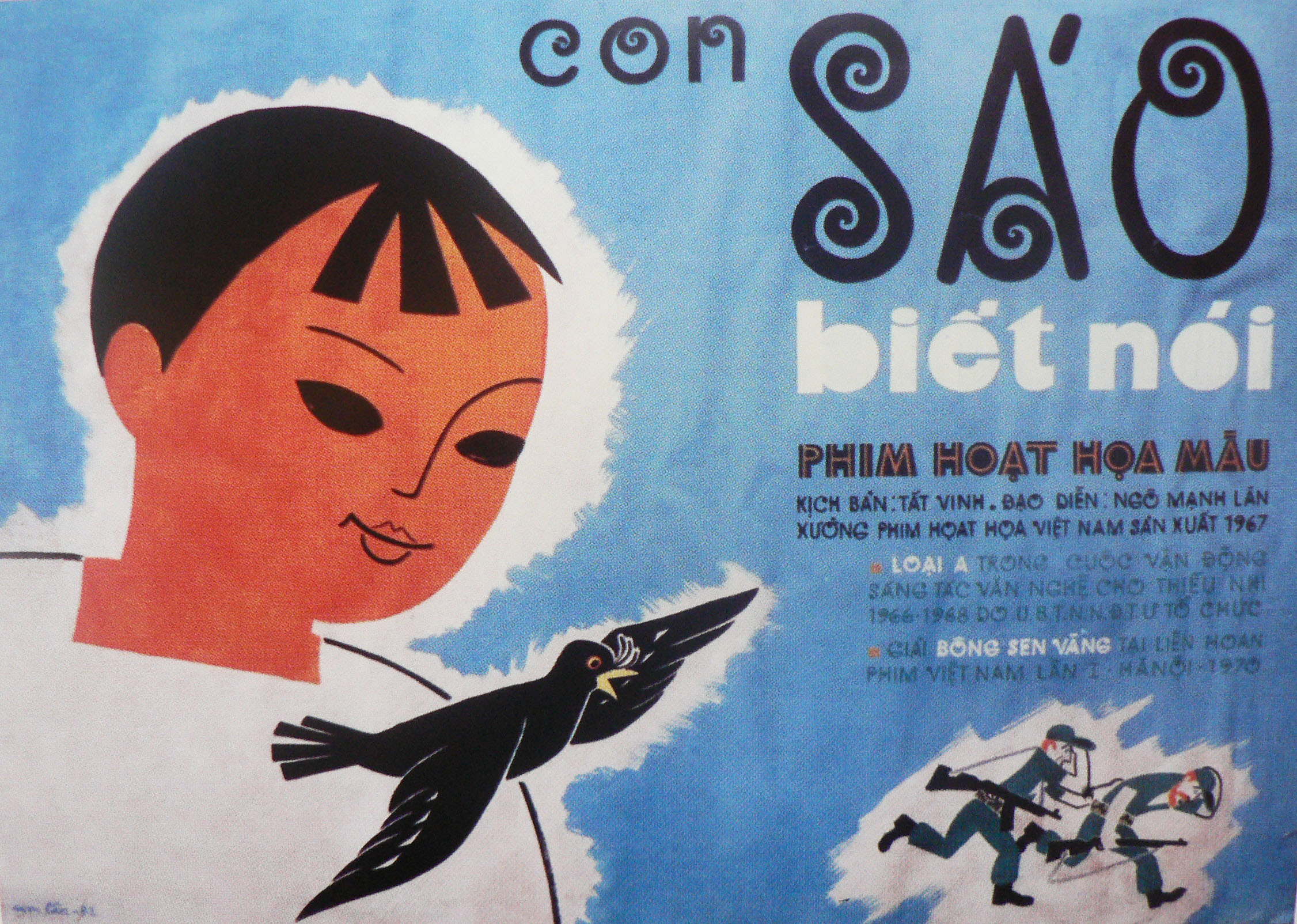 Very little has been reported on Vietnamese animation films during the 20th century and most sources of information on this subject are in Vietnamese. This especially applies to Vietnamese animated films made before, during and right after the Vietnamese War. However, we were able to find a few short 2D-animation films with English subtitles, aimed at a children’s audience. What they all have in common, is that the directors of these films wanted to teach Vietnamese children a very important moral lesson.

The Talking Bird (1967) is made by one of the most prolific animators in Vietnam’s animation film history: Ngô Mạnh Lân. This short tells the story of a boy who wants to teach a bird how to talk and is set against the background of the Vietnamese war. The bird succeeds in saying “demolish the American” and “fight” and starts to annoy the American soldiers who are occupying the area where the boy lives. The American soldiers are portrayed as drunk guys who aren’t as tough as they seem to be. The talking bird drives the soldiers crazy, makes them scared, and finally chases away them out of the village.

The colourful animation is accompanied by both Vietnamese songs and classical film music that reinforce the emotions of the scenes. The film ends quite abruptly with a shot of the boy who taught the bird to talk. He wears an army helmet and holds a gun in his hand. He looks proud and ready to fight for his country. This final sequence almost makes you wonder whether this is an anti-America propaganda short or a promotion film for the Vietnamese army to recruit child soldiers.

The Letters (1968) is rather innocent compared to The Talking Bird. This short, made by Hoang Sung, is about a naughty schoolboy who doesn’t attend school. While the crickets sing and laugh about the boy’s behaviour, his grandpa forces him to do some writing exercises. Ink drops fall down on the letters that the boy has written on a piece of paper, which transform into characters that actually come alive. “Love the Letters” is the message of Sung’s short, because then going to class will be much more fun.

The style of the film is very reminiscent of The Talking Bird. Lan and Sung both use bright colours and the design of the characters is quite simple, whereas the background is more detailed. In addition, they both pay special attention to nature, to animals in particular by giving them a voice, literally.  A beautiful gesture, since animals have the least right to talk during times of war.

The Competition is made in the post-war era, in 1978 by Ho Quang and is slightly different regarding the style and narrative. Compared to The Talking Bird and The Letters, the animation of The Competition is darker and more mysterious. Moreover, Quang’s short is not about something happening in the daily life of a school boy, but about a kind of spiritual event.

The Jade Emperor needs a successor, since he has become old. Several candidates, among others the God of Rain, the God of Wind, and the God of Thunder, have to prove their skills during a battle. Soon, the battle among the gods turns into a battle between gods and human beings, who try to control nature by technological inventions and want to take over the emperor’s throne. In times of climate change, we would probably hope for a happy ending with the gods teaching humans to protect their natural environment, however, in The Competition it’s technology that beats religion.