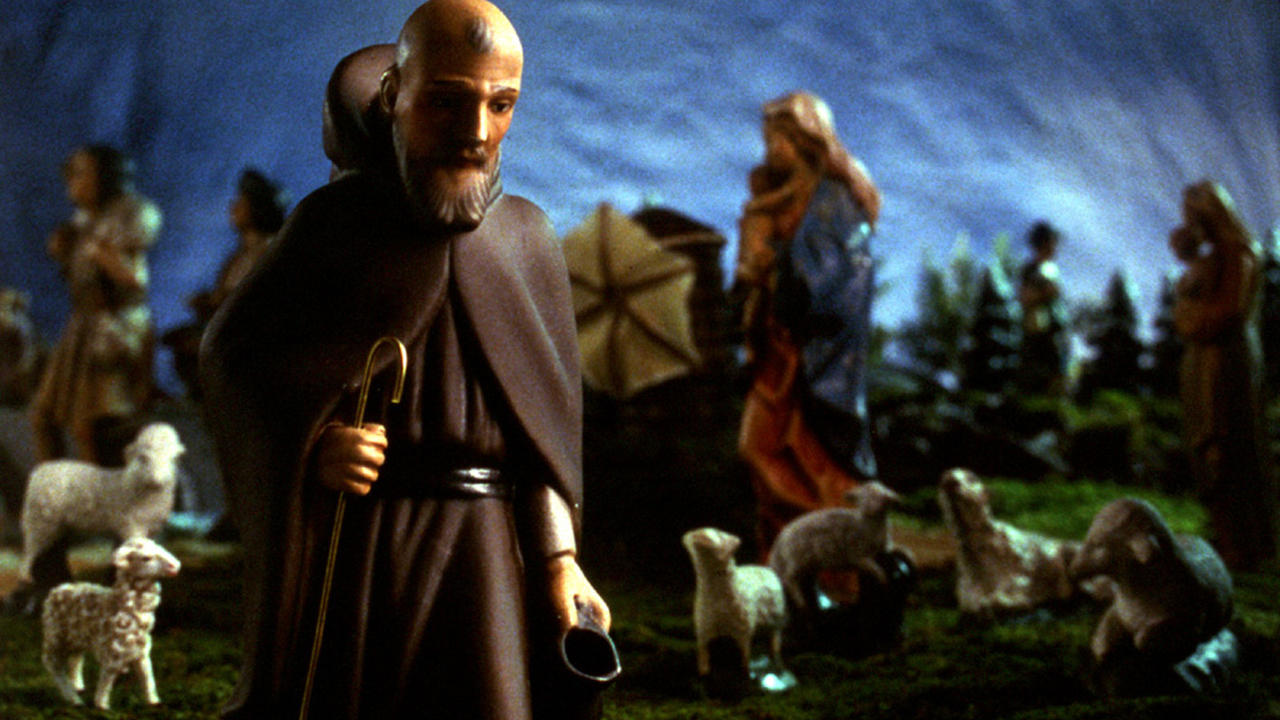 Tabu (2012) launched Miguel Gomes upon the world film stage, with its success and plaudits worldwide, including the FIPRESCI prize at the Berlin film festival. Even though Gomes’ second feature Our Beloved Month of August (2008) premiered in the Director’s Fortnight at Cannes, it was his third that made him a favourite in cinephile circles. But the Portuguese director has been making short films since way back in 1999.

Time to look back at the earlier short film work of the man who got so much credit for Tabu that he was able to make a six-hour, three-part, modern-day adaptation of Arabian Nights (2015). To see how much of that genius, skill, and hubris was already present in his early work, starting with Meanwhile: ‘A musical film by Miguel Gomes’, the opening credits claim. But is it? Don’t expect singing and dancing in this twenty-odd minute short, though there’s a bit of almost dancing at a party scored to several Kinks songs. Which leads to a fantastic tracking shot across the house of the party, in which teenagers hang around while two boys and one girl start a three-way relationship. That almost seems to end at the beach some days later because of inevitable jealousy – a relation summed up in two scenes. The way Gomes uses pop music, slow shots, and deliberate pacing to create a specific lazy summer atmosphere almost feels like a precursor to the flashback sequences in Tabu, while also recalling Claire Denis’ US Go Home (1994). Elements of this second short would also return in Gomes’ later features, as it follows a family’s Christmas dinner in a style that makes it feel like a documentary, presaging Our Beloved Month of August a bit. At the same time Gomes serves up several monologues in voice-over, ranging from folktales to political broadcast, while we see disconnected images of a nativity scene in which the traditional statuettes get disturbed by a Spider-Man action figure, which presumably belongs to one of the children celebrating Christmas – the only link between the nativity scene scenes and the documentary celebrations. The best joke is at the very end of the film because one of the children playing gets hurt and the director yells cut, presumably so someone can take care of the kid. What if you’re ten years old but have the body of an adult, and thus are shunned and ridiculed by other ten-year-olds? Don’t worry, you’re not alone! Gomes’ first real success is the first one not billed as a musical comedy or musical in the credits, yet it is the first of his shorts that really fits that description. The summer atmosphere conveyed through black & white cinematography feels like a precursor to Tabu in hindsight. As does the silent film style in which we see dialogue spoken but hear very pop music, similar to the second half of Tabu. In this case, Gomes uses, re-uses, and remixes one old-timey pop song to great effect, to increasingly add more absurdist humour to an already pretty daft film. By the end, short bursts of vocal samples of the song function like dialogue, matching the mad mouth movements. Would Gomes ever have as much fun as with Kalkitos? Gomes certainly tried with another absurd short in the same year, but doesn’t reach to the same height with 31. A couple of teenagers get a tennis lesson, kick a ten-year-old for stealing tennis balls, then get beaten up and robbed by his big brothers, after which both sets of kids roam around the countryside for a day. Interrupted by on-screen texts that compare Portugal’s journey after the 1974 revolution into a modern European country to that of Dorothy’s journey in the Land of Oz in The Wizard of Oz (1939). There’s something about class differences here, but the parts don’t amount to much of a sum here.

Canticle of All Creatures (2006): Francis of Assissi Reloaded Miguel Gomes would never really stop making shorts. After making his first feature in 2004, The Face You Deserve, he went back to making the 22-minute short Canticle of All Creatures: a re-interpretation of the life of Francis of Assisi, the very popular Catholic saint, in three parts. First, a singer walks through the modern-day town of Assisi in Italy, singing a song about the glory of God in Portuguese (a modern interpretation of St. Francis’ ‘Canticle of All Creatures’), and we see tourists and nuns react.

In the middle section St. Francis wakes up as if from a coma, in the woods, and has to be taught religion all over again by one of his disciples. Not only does this poke fun at the holiness of the saint to be, but is the most gorgeous piece of film Gomes has made up until this point in his career, using a silent film technique (monochrome colouring) again, to great effect. In the final section, Gomes continues to use the monochrome colours over footage of animals, the creatures of the religious song. The combination of gorgeous skits and self-aware documentary footage accompanied by voice-over points the way to Gome’s epic Arabian Nights (2015), which in itself is basically a collection of loosely connected shorts.

After Canticle of All Creatures, Gomes would make two more shorts, both even more experimental. During the filming of Our Beloved Month of August, he would also make Carnival: Looking for Paulo ‘Miller’ (2008), which I was sadly unable to obtain at present. Five years later he would follow up the success of Tabu with Redemption (2013), a strange commentary on some of the most powerful European politicians of that time. Currently, Gomes is working on what seems his biggest feature yet, a chronicle of a 19th-century war in Brazil, but who knows, he might make another experimental short afterwards to balance things out.