The Best of Imagine Film Festival 2018 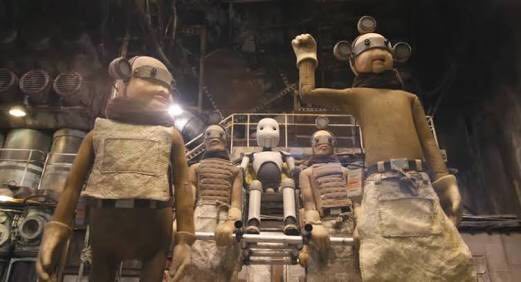 This year marked the very first time that I attended the Imagine Film Festival: A nice yet intense experience. Being used to nine to five work days for a couple of years now it wasn’t always easy to watch three or four films a day. Especially if the summer comes early and temperatures reach almost 30 degrees during the second week of the festival. I have to admit that I’ve skipped a couple films to enjoy the sunshine near the EYE Filmmuseum in Amsterdam. The hottest day (Thursday) happened to have three films I really wanted to watch: The time-loop-thriller A Day (2017), stop-motion animated Junk Head (2017), and the latest Wes Anderson Isle of Dogs, one of the main attractions of this year’s Imagine and winner of the Silver Screen Award, awarded by the audience. So despite the beautiful weather I happily sat down in the cinema.

A Day from South Korean director Sun-Ho Cho is about a father who has to beat time and several other obstacles, again and again, to save his daughter from a fatal accident. The film starts off on an excellent note and sets up the situation very clearly by adding some great thriller elements and surprises. But after the first hour, when the total set up and motivations are clear, the film fails to remain interesting enough and leans too much on somewhat cheap melodrama. Definitely not the great film I was hoping for but still worth watching. Isle of Dogs is exactly what you can expect from Wes Anderson: Great style, smart humour, eye for detail, and an endearing adventure. More than in his earlier films this is also an allegory about propaganda, immigration, and racism. What sticks most afterwards is still the Anderson vibe and style but you can wonder if this is all the director aimed for this time. Nevertheless a fine and fun addition to his oeuvre. Perhaps the most anticipated film for me on this sunny day was the Japanese stop-motion animation Junk Head. The background of this project is very impressive. Takahide Hori started making this in 2009 and did practically everything himself. This already deserves a lot of praise. The first shots in this film only add to the affection for this film. Hori managed to create a unique world, a post-apocalyptic cyberpunk future that feels a bit like Dune (1984). He does this so well that you sometimes forget you’re watching a stop-motion animation film. A huge compliment for how well this was made. Unfortunately, the film becomes a bit problematic as it progresses, its storytelling, which happens to be another theme of the festival, is not as good as you want it to be. It feels repetitive and is a bit too slow at times. With a duration of almost two hours, you end up with the feeling that it would’ve worked better as a short or at least a shorter film. Perhaps the short Hori released in 2013, which was a part of this film. Nevertheless, the idea of this film, the fantasy and creativity of Hori and the fact that he created everything himself and rejected help to protect his vision, deserves nothing but respect. All things considered, Junk Head was definitely one of the most unique and interesting films to be seen at this year’s Imagine. A better storyteller is Steven Soderbergh. His latest film, Unsane, was also part of this year’s programme within the storytelling theme. When it comes to technical experimentation and vision, this film can be considered a unique one since everything was shot with an iPhone 7+, without any additional lighting. This sounds like a gimmick, and it is to a certain extent. The film has a lot of scenes within a psychiatric hospital. Unsane soon raises questions about the reliability of the narrator and protagonist, played by the great Claire Foy, where the gimmick definitely has a function. Using just the phone gives a sort of natural look that adds to the feeling of being trapped and in some scenes to the claustrophobia and perspective of the protagonist. The lack of artificial light is annoying at times, though. When it comes to the plot: with all its twists and turns it is entertaining and well executed by Soderbergh. It doesn’t, however, add anything really new or unique to the landscape of films in this genre. More surprising and refreshing is Tiere (2017) from Polish filmmaker Greg Zglinski. This relationship drama makes both viewer and protagonists wonder what is real or not. The couple Anne and Nick move out to the Swiss Alps for half a year while one of Nick’s colleagues watches over their apartment. On their trip to the Alps, they hit a sheep with their car and this is the start of some weird events where identity and the perception of time is unsure. What is real and what is not or in whose imagination, reality or story gets less and less clear as the film progresses. It cuts between the cabin in the Alps and the situation in their apartment with Nick’s colleague and connects the two stories, or does it? A film that isn’t for everyone but great stuff for those who like ambiguity and mystery.

Overall my first Imagine was good and well organized. It offered a very diverse and broad spectrum of available films. There were a lot of other things to enjoy. An entire VR-film-programme with nine different films. Interviews with several filmmakers, classics (even with live music or on VHS), a witch, masterclasses in storyboarding and writing, shorts, workshops, and a daily talk show in the festival café. This café provided dinner every day between 18.00 and 20.00 and the ideal location to discuss the programme with other guests. On the last day (Friday) several awards were given, including the Black Tulip Award which was awarded to what I think was the best film of the festival: Tigers Are Not Afraid, which I’ve discussed in my previous article about the Kick-Ass Women programme. See you next year, Imagine!

This Imagine Film Festival article was published in April 2018