The Eerie Power Of A Man In A Suit 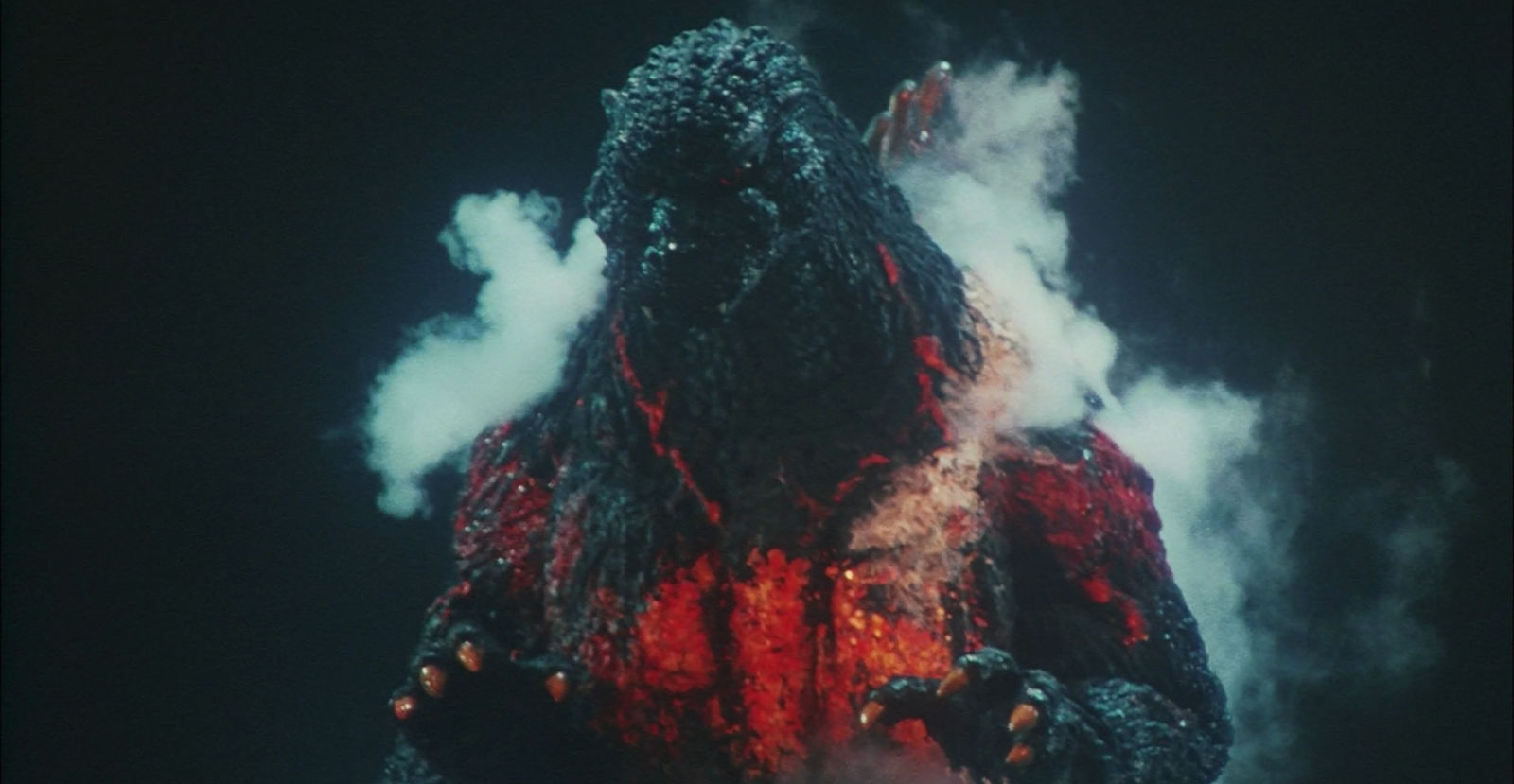 It’d be tough, I think, not to have some issues with Godzilla: King of the Monsters (2019). It’s cynical and filled with awe and wonder in equal measure, as if poisoning you and feeding you the antidote at once. American movies at its budget (to wit: 200 million dollars) are all hand-wringing and apologies anyway. Too much action, here’s a cute kid. Too much sentimentality? We agree, here’s a guy whose job it is to be sarcastic and deflate the tension we worked up a head of steam trying to produce. The picture that emerges is a room full of exhausted executives tearing their hair out imagining audiences giving up at any minute. The promise of monsters is enough. It’s always been enough, why now the marrow deep terror at the idea that the thing will sink? I enjoyed bits of it, how could I not? When I was a kid Godzilla was a part of my cinematic diet, along with his one-time nemesis King Kong. I watched him fight a floating helmet, watched him pummel a gigantic cockroach, watched him throw rocks at an enormous crab. I was all in on giant monsters. Godzilla’s rubber suit provided a fun counterpoint to the Ray Harryhausen stop-motion effects I so loved; they deepened each other by displaying the differing forms of artistry that go into shaping my nightmares. Harryhausen’s hand touched clay beasties and Eiji Tsuburaya’s monster suits, donned by Haruo Nakajima had no need to compete with one another for my attention. There were monsters. That’s what mattered. Godzilla: King of the Monsters

Watching Godzilla: King of the Monsters and intermittently finding myself drawn to the sheer size and beauty of the new digital renderings of monsters like King Ghidorah and Mothra was still a confusing, confounding exercise. Ghidorah would lay waste to a building and they’d cut to teen idol Millie Bobby Brown down below, as if we need a human to care about when Godzilla’s up there destroying cities. 200 million dollars worth of focus groups and sweating over the machine tooled agreeability of a movie that still couldn’t conjure the eerie power of watching a man in a suit stand waist deep in a pool while water boiled underneath him. That’s how Godzilla Vs. Destroyer (1995) starts. It’s a deeply silly movie in a hundred ways but it’s also unforgettable because rather than attempting to please everyone, it pleases itself and stays true to the dictates of what we call the Heisei Godzilla films. The Heisei was the name of the era when Hirohito’s son Akihito ascended to the throne following the older man’s death. It means something like “peace everywhere,” translated from a sentence on Chinese history, interestingly enough, about peace on heaven and on earth. It ended about a month before the release of Godzilla: King of the Monsters when Akihito abdicated. Hirohito’s death was something of a shock to the people of Japan as his cancer was kept secret from the public until after he died in 1989. By the time Akihito had taken the throne a new cycle of Godzilla films had begun with 1984’s The Return of Godzilla. The Heisei films were governed by an even looser logic and an even more confusing tonal identity than even the most laboured of the Shōwa era Kaiju films. The Heisei films seemed as if not more interested in the preteen market, and so cute critters make frequent appearances and younger characters abound. If you want some idea of the shift in focus Baby Godzilla is reintroduced and King Ghidorah is retconned into new life as the product of Brundling three Furby-like creatures who are sent back in time with their owner. Three Ewoks taped together. That was the odd mercenary approach of the Toho heads during this period. They ripped off successful science fiction left and right and wrote themselves into corners they couldn’t dig their way out of with an earth mover.

Godzilla became a queasy reflection of the Japanese film industry in the late 80s and early 90s. As filmmakers like Shin’ya Tsukamoto, Sion Sono, Takeshi Kitano, Takashi Miike, Sogo Ishii, Kazuo ‘Gaira’ Komizu, Mamoru Oshii, Hideaki Anno (who would later co-direct the beloved Shin Godzilla) and later Hideo Nakata and Naoyuki Tomomatsu moved underground filmmaking’s cutthroat black humor and penchant for extreme violence into the mainstream, the Godzilla films and their rival Gamera films became a kind of catch-all Blockbuster-inspired rebuke. Hayao Miyazaki and his colleagues at Studio Ghibli would more assuredly mix fantastical elements before and after the Godzilla reboots, but that’s another story. The Heisei films, no matter their implications, could be seen by children. That’s perhaps what makes Godzilla Vs. Destroyer (or Destoroyah as the subtitles have it) so fascinating, more so than some of the better entries of the Heisei era. They kill Godzilla with the same suddenness the public learned of Hirohito’s death. Godzilla had made six appearances since 1984, the penultimate being Godzilla Vs. Space Godzilla. That movie has the Japanese mafia kidnapping a woman who wants to use telepathy to communicate with Godzilla, a Voltron-style robot shaped like an angry penguin, baby Godzilla and his adorably wide eyes, the reappearance of the Mothra twins, and a boatload of romantic lighting all throughout the human subplots. It is a ridiculous movie, in other words, and Toho followed it up by killing Godzilla in a slow, agonizing fashion. Director Takao Okawara wasn’t up to the task, as it turns out, of making his death poignant on its own terms. They brought back iconic composer Akira Ifukube to score what was supposed to be the big lizard’s last ride. Of course, as soon as the film hit theatres, Tristar bought the rights to the Godzilla name for 1998’s dreadful Roland Emmerich-helmed Godzilla, prompting Toho to answer yet again with Godzilla 2000, also directed by Okawara. There’s a reason we’re still seeing him even after Toho and Tristar killed him off. Once you’ve played with monsters, it’s incredibly difficult to stop. The Return of Godzilla (1984) wasn’t supposed to be the start of a new series, it ends with Godzilla being lured to his death into a volcano. It was just that it took too much money for Toho to leave on the table and so the other Kaiju were dusted off for him to fight. When I was a kid I found the ending of Godzilla 1985 eerie and tragic, the giant reptile oddly dancing into oblivion, consumed by fire, his shadow on the interior wall of the volcano. When I watch it now it’s difficult to remember how awed I was. The film looks like a mess to me now, but I still find the sight of a man in a suit bathed in red light falling into hell to be powerful in spite of itself. Godzilla is something of a sponge for symbolism and filmmaking trends. He can flourish no matter what era or zeitgeist you plug him into. Gareth Edwards’ 2014 Godzilla reboot and Shin Godzilla have nothing in common stylistically or even metaphorically beyond a baseline fear of the apocalypse, and yet both were staggering successes. The Return of Godzilla’s success demanded more Godzilla adventures even as it became clear that the hearts of everyone at Toho weren’t invested in it any longer. After all Godzilla Vs. Destroyer takes a lengthy detour in which it rips off James Cameron’s Aliens (1986). Stealing from a ten year old movie like you were Bruno Mattei doesn’t speak to an overflow of creative energy. The only thing energized here are the monster suits and the great score by Ifukube. Okawara doesn’t do much with his camera, content mostly to hang back and watch. This works to his favour when filming his Kaiju. The footage of a dangerously radioactive Godzilla wading through the ocean has a commanding strangeness. He’s really there, even if he is a man in a suit, and the process used to boil the water around him as he swims, heating up the oceans in preparation for a nuclear meltdown in his heart, are quite effective.

Godzilla Vs. Destroyer needs an excuse to end things so they give Godzilla a thermonuclear heart condition and then reach back into his past for a foe to bring him down. The ending of the original 1954 Godzilla ends with a scientist unleashing a powerful weapon on the beast (meant to rhyme with the bombs dropped on Hiroshima and Nagasaki like Godzilla himself). Destroyer is a mutated crab found in soil samples from where the weapon was detonated. It doesn’t resonate quite as much as the film seems to think it will, even with footage borrowed from the ’54 movie. And yet… Destroyer quickly mutates from a series of small crabs into man-sized monsters that can mutate together into one giant lifeform capable of killing Godzilla Jr and then kicking the hell out of his old man. You’re not supposed to cry when a toy dies. It’s rubber and plastic, it was never alive. And yet the movies keep asking us to mourn the inanimate. Pixar’s made a trillion dollars on the idea. If Godzilla dying here does something strange to our heart it may be because the days of hand-made monsters was over, supplanted by the CGI-augment dinosaurs of Jurassic Park, and the living dolls of Toy Story. Godzilla Vs. Destroyer is nearly 2 hours of watching a noticeably sick and confused Godzilla lurch towards his death. His tragic death is rendered ludicrous by poor dubbing in the US release, sluggish direction and a nonsensical script. The reason it works is Ifukube’s score. He returned to some of his old themes from the first film and revamped them, and wrote a piece of music for the final scene that’s so heartbreaking it beggars belief. Godzilla glowing orange as he faces down death, first in the form of his dead son and the loss of his species, then in Destroyer, and finally when we kill him with the same military technology that woke him up in the first place. Godzilla Vs. Destroyer hobbles itself every few minutes from a craft standpoint but all the same when the movie kills its hero and then the credits just roll right over his ghost it’s unduly arresting. Ifukube’s music proving that the right cue could turn anything unforgettable. Image and sound in what you’d have to call an abusive relationship. A toy in its death throes, raised from the dead by greed, killed by neglect, literally melting before our eyes as he hits critical mass. Cinema was never made for this but it’s given us little else. Well… that’s not totally fair. The uncanny valley wasn’t always this lovingly upholstered. No matter how fake the puppets and rubber suits are, they really stood there in front of a camera. They had density, mass, and they had weight. They were giants even though they were only 6 feet tall. Our monsters were real and when they died we felt something, even if it was only confusion. They were as real as the fears that spawned them, as real as the men who gave them life on screen whether because they wore a suit or because they wielded the baton conducting an orchestra playing him to life. Godzilla was always a testament to the collaborative nature of filmmaking, only real because a hundred craftsmen did their jobs in unison. There were giants then, and they made monsters. That’s what mattered.