The Generals and The Women 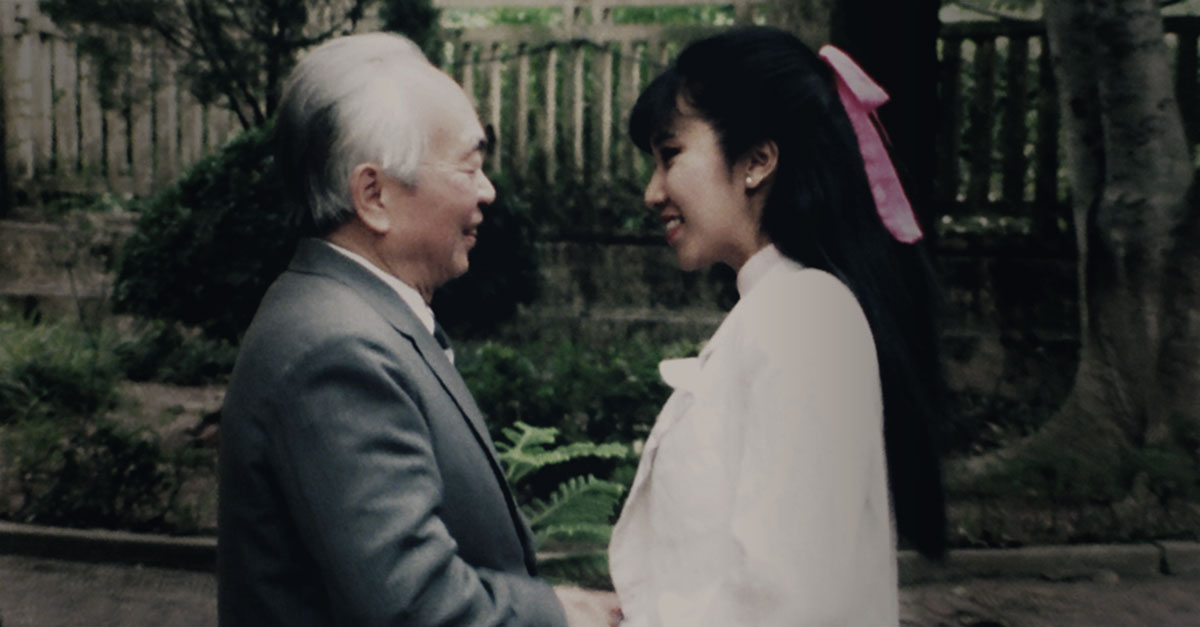 Filmmakers can explore very personal issues and tell very personal stories, but nobody can do this quite like documentary filmmakers can. They can break through the filters and barriers that fiction might present, by putting themselves directly in their own work. This isn’t necessarily a guarantee for personal storytelling – after all, how personal are Michael Moore’s films? – but does provide that opportunity.

In two remarkable films that played at the Krakow Film Festival earlier this month, two filmmakers took that opportunity to tell a very personal family story. Not only that, through their family story, they unfolded a part of each country’s (political) history. In The General and Me (2017), Tiana Alexandra-Silliphant tells the history of military resistance in Vietnam to outside forces in the Twentieth Century, through her own life story as a Vietnamese woman who grew up in The United States of America. In Adriana’s Pact (2017), Lisette Orozco explores the history of oppression of Chileans under Pinochet’s regime in the 1970s and 80s through trying to find out how involved her own aunt was in that oppression. Healing the Two Nations: The General and Me

For the Vietnamese, the Vietnam War (1955-1975) or the Resistance War Against America, was a continuation of their battle against French colonial forces that were ousted in 1953, after which the country was split into North and South Vietnam. The United States backs South Vietnam against the North. In 1964 this led to a ground war that lasts until 1973, when the US withdrew after years of senseless fighting have gotten them no closer to defeating the North. In 1975 the North defeated the South and re-united the country under communist rule.

Tiana Alexandra-Silliphant is born in Vietnam but her family moves to the United States in the 1960s when she’s just 5 years old. She grows up in America as the daughter of the man representing the South-Vietnamese cause in the States, who ultimately is bitterly disappointed in his new home country for abandoning the fight in 1973. Two years later, the North Vietnamese army led by Ho Chi Minh and general Vo Nguyen Giap (the titular general) wins the war and Vietnam becomes a communist state. Twelve years later, Alexandra-Silliphant travels to Vietnam to interview Giap on camera, the start of a 30-year journey to make the film The General and Me, that only just premiered at the 2017 Krakow Film Festival.

Through her own personal history and cultural identity as both Vietnamese and American, Alexandra-Silliphant embodies both the conflict and what could possibly unite both countries again peacefully. Or at least, that’s what her late husband, Stirling Silliphant, tells her to do when she considers interviewing Giap and making a film about it. He tells her to make the film in order to ‘heal the two nations’. Quite a monumental task. Silliphant, himself a screenwriter and producer who won an Academy Award for In The Heat of the Night (1967), sets her off on a path that would take her thirty years to complete.

Be water, my friend

The Silliphants met through mutual friend and martial arts teacher Bruce Lee, before he himself became a film star. Tiana Alexandra-Silliphant sought his tutelage to be able to defend herself, because as a Vietnamese girl in the US during the war, she grew up being seen as the enemy and was attacked and beat up. Lee’s philosophy is quoted several times by Alexandra-Silliphant in her film as a guiding principle, especially his eternal motto “Be water, my friend“. When she first goes to interview General Giap, it’s the first interview he gives to a westerner. Alexandra-Silliphant is granted this access because of a poem she wrote, in which she laments the war and the divide between Vietnam and America. What starts as one interview, becomes many throughout the years, and includes many other people surrounding Giap, including his family, other leaders and members of the Northern army and Vietnamese government.

Portrait of a People

The Domino theory was a once (1950s to 80s) prevalent theory in the western world (especially the US) that if one country became communist, others surrounding it would soon follow as part of a domino effect. And then they’d all become part of a communist superstate akin to the USSR. Thus any country becoming communist needed to be prevented in the eyes of subsequent US governments of that era. The fear was that a communist Vietnam would join China either by alliance or just become one country. Any closer look at the history between the two countries would dispel such fears, since the Vietnamese have fought Chinese domination in the past just as fiercely as they fought the French and the Americans.

Through these interviews, a portrait of a people is created. A people always beset by invaders and overlords who try to subdue them, but are ultimately kicked out. A people who never sought war, but was always forced into it to gain independence. A people suffering again and again from the invasions of far more powerful, larger countries, but also a resilient people who, time and again, manage to oust these great powers. A people whose leaders first sought out the Americans for aid in building a new independent state modeled on the US after WWII, but were ignored. Who then turned to communism as a way of gaining independence from the French. Alexandra-Silliphant makes a convincing case for how unnecessary the later war between Vietnam and the US was, fought because of ignorance of local relations and because of the destructive Domino theory.

Vo Nguyen Giap, once nicknamed the Red Napoleon for his military prowess, turns out to be an eloquent, soft spoken man who claims to feel sorrow for each individual soldier who died during the war, both on the Vietnamese side and the American side. At one point, he says he thinks that the Americans will have learned not to meddle anymore in the affairs of other countries. Throughout the decades of interviews, Alexandra-Silliphant gets so close to the Giap family, that by the end she’s almost considered a daughter.

Story of a woman

Thus this story of a people is also her story, and contains her story as a resilient woman trying to get this film made. In the process, her husband dies and her son becomes and adult, eventually joining the team. There’s more than one scene in the film where someone asks Tiana Alexandra-Silliphant when she’ll finish her film. There’s even a fundraiser for the continuation of the project included, because a very unexpected guest shows up: General Westmoreland, Giap’s opponent for most of the war and the architect of the American war of attrition in Vietnam. Alexandra-Silliphant doesn’t let the opportunity slide to ask some tough questions.

The General and Me is so full of historical narrative, cultural details and personal anecdotes that sometimes it’s easy to lose sight of the bigger picture and story. But ultimately this fascinating portrait of a country, a people and its two main protagonists emerges, that makes one hope that Alexandra-Silliphant will be able to show the film to many more people than just those attending the documentary festival circuit.

Who Are You? Adriana’s Pact Adriana is Lisette Orozco’s aunt. The whole family adores Chany (Adriana’s nickname). When Chany visits, she’s the star of the show and the belle of the ball throughout her visit. Until she’s accused of torturing prisoners of the Pinochet regime in the 1970s and 1980s. All of a sudden, her popularity drops and her family avoids her like the plague, even though Adriana denies the charges. Only Lisette, often called Liss, still wants to talk to her. She wants to know the truth. Through her research into her aunt, including many talks with Adriana over Skype, she learns not only her own family history but also the history of her country, Chile.

She, of course, was aware of the fact that Chile was ruled by military dictator, Pinochet, for two decades. And that this rule included oppression of opponents. But it’s only through trying to find out if her aunt really tortured those opponents, that she learns about the full extent of her country’s recent history of violent oppression. Like Tiana Alexandra-Silliphant, Liss puts her personal journey of discovery front and center in this exploration of the political past. Similarly, Adriana’s Pact is mostly told through interviews. In this case, with aunty Adriana.

Adriana used to work for DINA, Pinochet’s secret service. To her, it was just a job like any other, and she feels no guilt about this. She claims she was just a secretary anyway, and never even saw any of the torturing and killing of political prisoners that went on in the building where she worked. It was simply the only way for her to experience a life of high class and riches. After being arrested decades later by people who do think she was personally involved in the torture, she flees the country and settles in Australia – a country that doesn’t extradite to Chile. In the beginning Liss is almost fully on her aunt’s side. However, through her interviews with her aunt and her research into DINA, Liss starts to suspect that her aunt’s accusers are actually right. Adriana doesn’t help her case by things she lets slip during their conversations. No direct admissions of guilt, but suspicious inconsistencies in her story. At one point, she tells Liss to threaten some of her co-defenders, old colleagues at the DINA, to not say Adriana was there. But how can she threaten to reveal something about them in relation to what went on in those torture chambers, if she was never there, like she claims?

Especially the last conversation in the film between Liss and Adriana seems to be telling. Adriana turns the tables by questioning Liss, and skillfully manipulates her niece emotionally to get her to back off of a line of questioning. When Liss reviews this footage, she realises this skill seems an awful lot like that of one who’s familiar with interrogations. However, Liss never finds out what exactly is the truth of what happened, and can never be sure about it one way or the other.

This mirrors how Chile is still coming to terms with its recent political past. Shown here by Liss attending both a memorial of the day in 1973 when the leftist, democratically chosen president Allende was overthrown by Pinochet’s military coup, and a rally of Pinochet followers who wish to restore his reputation as a great leader. The rally is full of overblown rethoric and, to these European eyes, similar to Nazi rallies of the 1930s in Germany. The resemblance (there’s a better word for this, damnit!) simply lies in people getting together on a square and listening to a radio report of the military take over on the 11th of September 1973. There is still a violent recent past to be fully dealt with here, that haunts Chile and its people. And as long as those responsible escape justice and completely deny involvement, that haunting will continue.