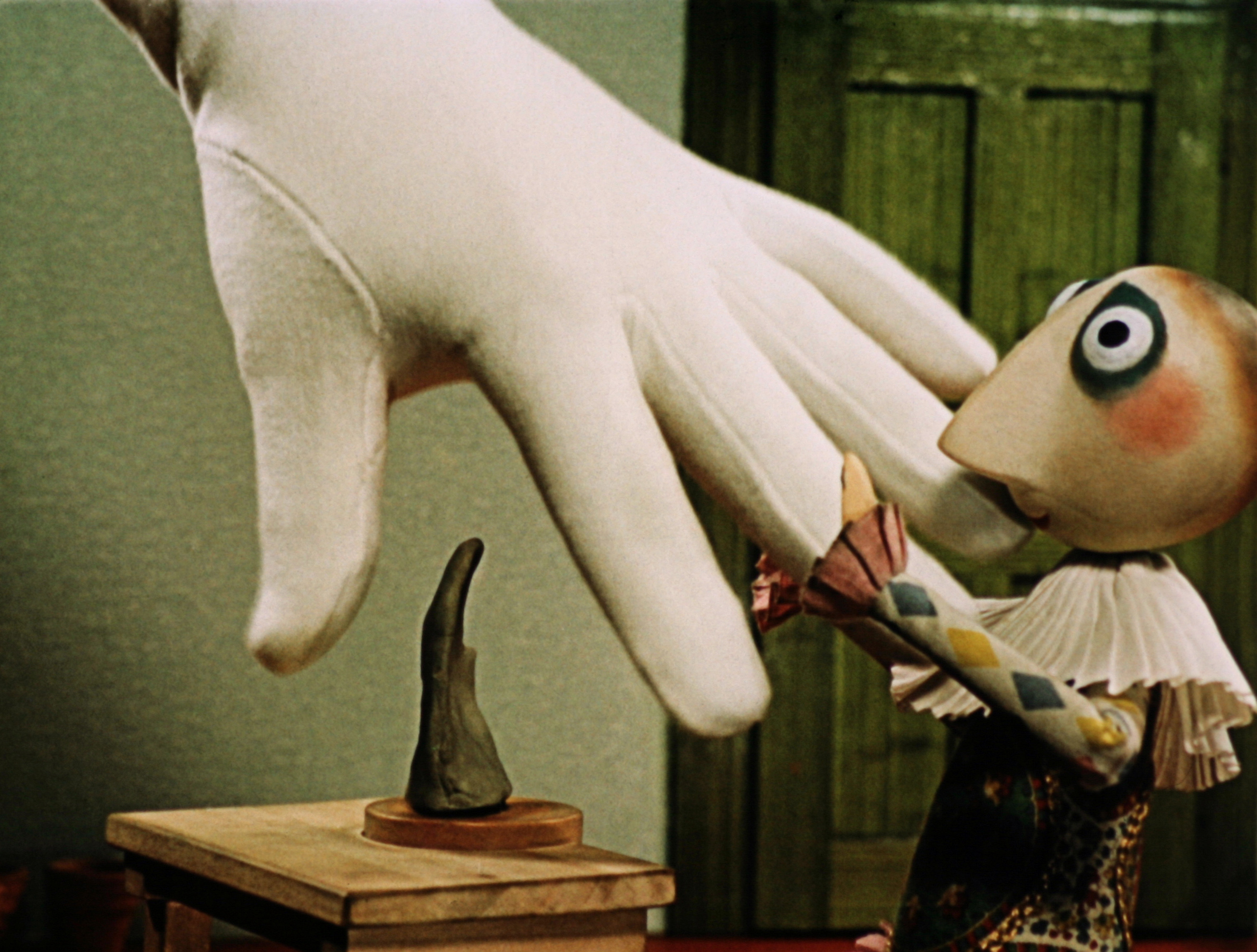 The day of the potter presented in Jirí Trnka’s The Hand (1965) starts happy and carefree. The man wakes up, does some stretches, greets his plant and starts working on a new flower pot. The peaceful setting is disrupted by a big hand, that knocks on the front door of the house the potter is living. Uninvited, the hand enters the house through the window and starts to sign what the potter has to do: make a statue of the hand.

The Hand is a colourful stop-motion film based on the Czechoslovakian puppetry traditions of the eighteenth century. Set in a dollhouse, the animation is accompanied by occasional beautiful sound effects, either to emphasise particular emotions or to express the sounds particular actions or props make. The puppets facial expressions are limited: only the shape of his thin lips shows whether the potter is happy or sad. His eyes are wide open all the time.

The static nature of the potter’s face reinforces the oppressive (and at some point hypnotising) feeling caused by the situation he is caught in. The potter does everything to get the hand out of his house and refuses to obey its orders. However, the hand continues to bother the man with its propaganda, via a telephone call, a television broadcast and a newspaper. Eventually, the potter is caught in a trap and becomes the hand’s marionette.

The Hand represents the life of an artist who has to live in an oppressive political situation. It addresses an inner struggle of the artist: whether or not he or she should obey the demands of a government. The film clearly sympathises with the artist though. It represents the potter as a strong, stubborn man who ends up as a victim of the political order.

No wonder the Communist Czechoslovakian government interpreted the film as subversive back then, and decided not to distribute it. However, The Hand did receive international recognition and won some prizes at film festivals (the Jury Special Prize at Annecy, among others). Trnka never made another film after The Hand. He died in 1969, perhaps with the same feeling as the potter in his last film had at the end of his life.

The Hand can currently be found both on Vimeo and Youtube.

This Recommendation article was published in July 2019