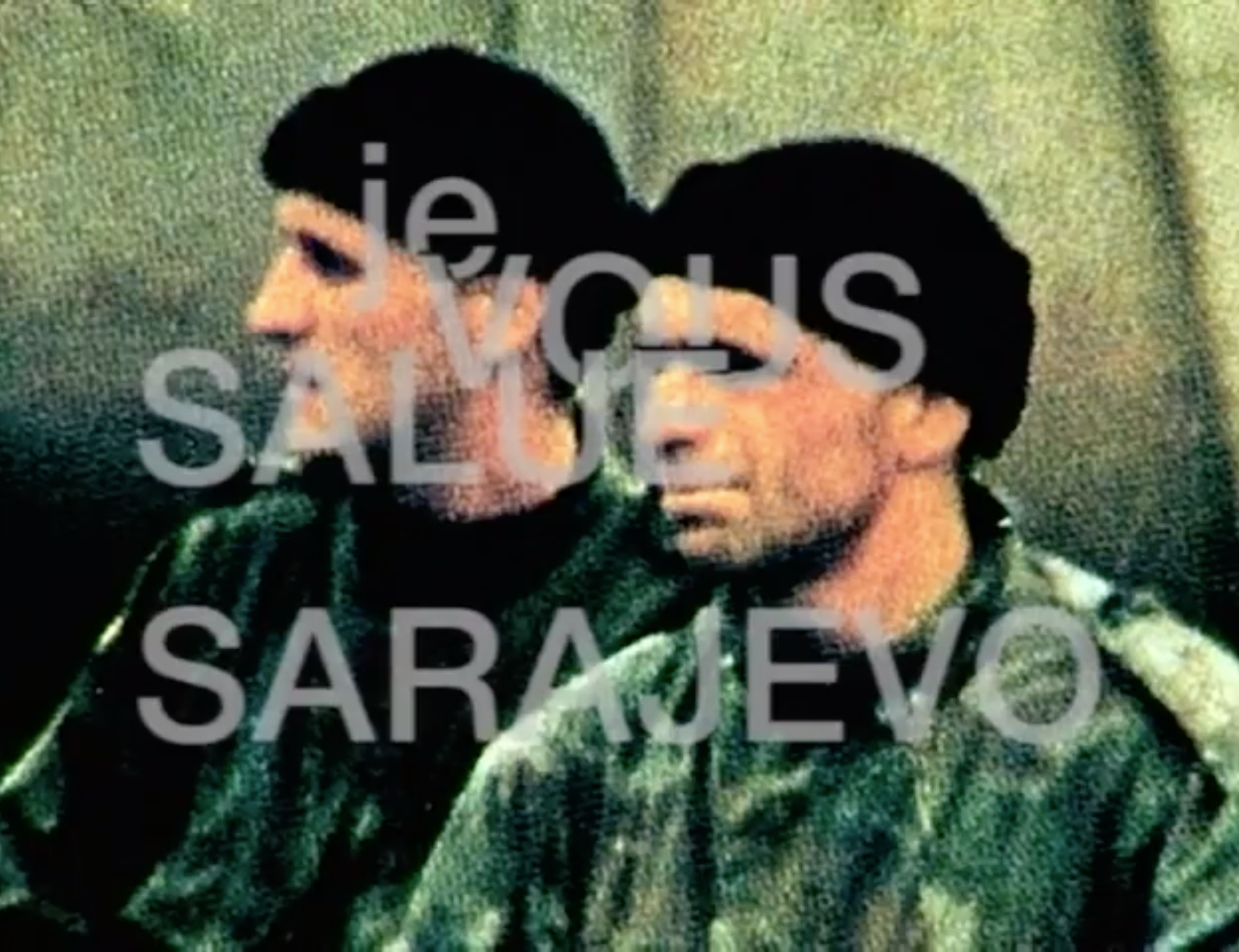 The screen is overwhelmed with the image of soldiers and the sounds of wailing strings. The texture is akin to Lichtenstein: vignettes of faces looking in the distance, a hand daintily holding a cigarette, or a boot in motion, all blown up until the oversaturated, grainy magazine print almost starts to fall apart. Je vous salue, Sarajevo (1993), a two-minute short by Jean-Luc Godard, chops a single image of atrocity from the Bosnian war into constituent parts as if they were a piece of advertising. Eventually the film reveals the image’s broadest scope (it’s “objective” horror), but not before the individual, familiar pieces create the context for the uniquely cruel violence.

Over this broken image Godard lifts the words from mid-century anti-fascist writers: one a conservative Catholic, the other a founder of surrealism. Godard sees a parallel consensus by artists of all political backgrounds during the Second World War and his then-now. Yet, not even 50 years on, mass genocide has returned and the European establishment which sees no immediate threat to itself looks on in disgust but without teeth; they may gesture at humanitarianism but would never address the root causes of such violence and hatred.

Godard adds his own commentary: “For there is a rule and an exception. Culture is the rule, and art is the exception.” The culture is incapable of combating this violence, because violence is the rule. And with art being the exception to the culture, Godard means much more than just the role that artists play in this big game of politics: “Everybody speaks the rule… Nobody speaks the exception. It isn’t spoken, it is written… it is composed… it is painted… it is filmed… or it is lived, then is it the art of living… The rule is to want the death of the exception. So the rule for cultural Europe is to organize the death of the art of living, which still flourishes.“ Whether it is in Srebrenica or Dachau, the structure of the violence is the same: the rule seeks to snuff out the exception. Nothing which seeks to maintain the rule, no institution is capable of stopping the violence, they are its root. The answer to peace is within the exception.

I’ve found the effect of the film to be like a gunshot: it comes and goes in an instant, but it leaves scars that can take years to recover from. Godard ends the piece with a final affirmation from Louis Aragon: “When it’s time to close the book, I’ll have no regrets. I’ve seen so many people live so badly, and so many die so well.” Je vous salue, Sarajevo is a prayer, a damnation, a call to arms. Out of a single image, Godard sees the whole of the 20th century circling around itself, and crafts what are perhaps the most essential two minutes of his entire filmography.

This Shorts article was published in March 2021