The Last Line of Defence 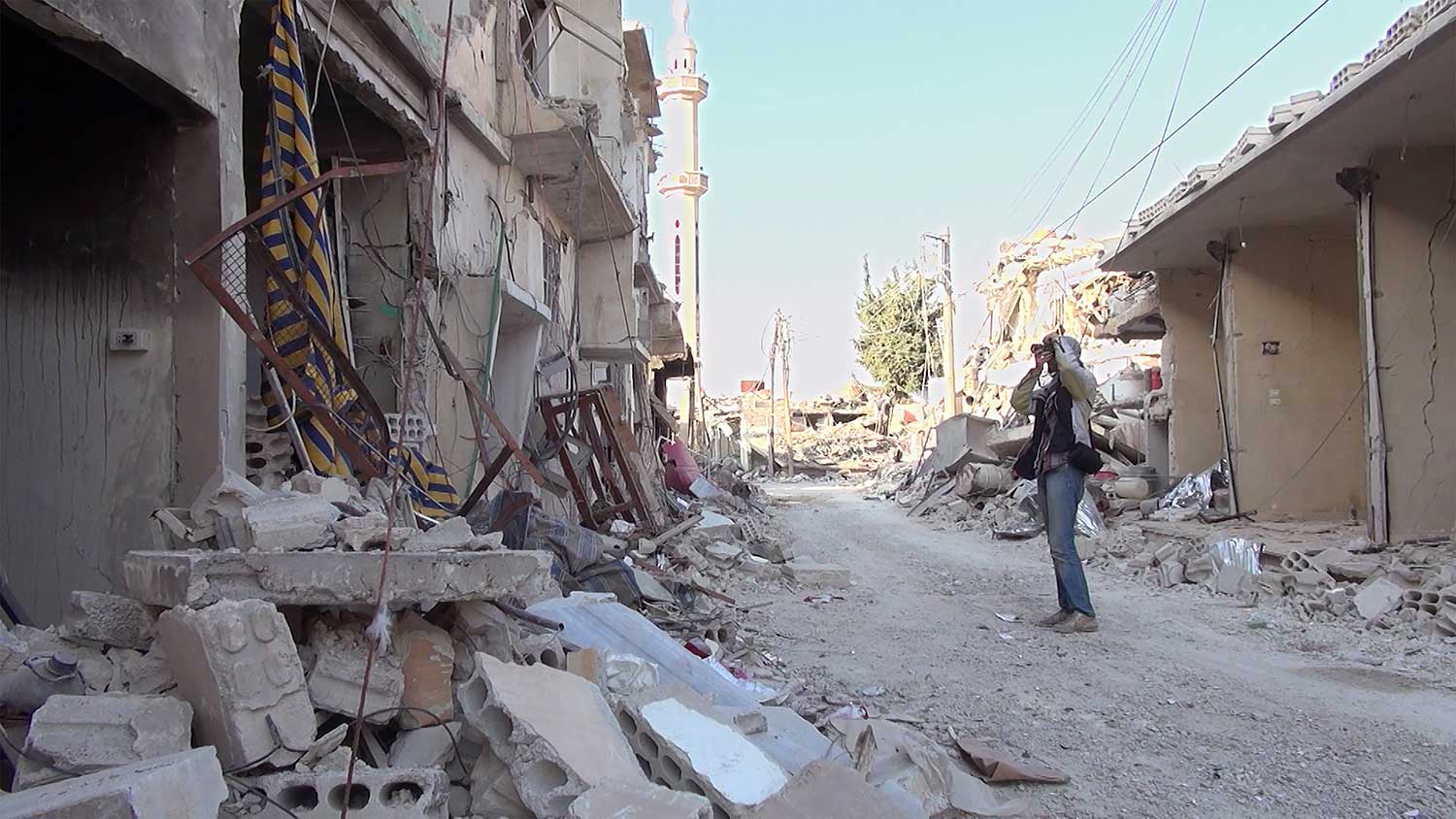 “The image is the last line of defence against time,” Saeed al Batal says in a film class in the documentary Still Recording (2018). He puts that idea to practice by being one of eight cameramen documenting the Syrian Civil War from the perspective of civilians and a group of armed forces fighting against the regime of President Assad in besieged city Douma. For these young men, it is a way to record the war and its effect on the people of Syria, which for them becomes their way of participating in what they see as the revolution against Assad without picking up a gun, and the only way to deal with what is happening around them.

As the Cinéma Arabe film festival has shown in the past week, filmmakers are finding a myriad of ways of dealing with the world around them and the issues people of all kinds of Arabic descent face. With For a Happy Life, co-writers and directors Salima Glamine and Dimitri Linder film the story of the Belgian-Algerian teenager Amel, her forbidden love for Belgian-Pakistani Mashir and the small community within Brussels in which they live as a suffocating tragedy, reminiscent of recent films such as A Wedding (Noces) (2017) and What Will People Say (2018) (You can find our review of that film by Bedatri Datta Choudhury here). Meanwhile, the tense, violent relationship and power dynamics between Palestina and Israel and the drug trade on the border of Tunesia and Algeria are both explored through comedy in Tel Aviv on Fire (2018) and the short film Nefta Football Club (2018) respectively.

Most screenings of feature length films at the festival were preceded by shorts, but this by no means meant that these were just appetizers to the main courses. In fact, Nefta Football Club proved to be a highlight of the festival, and perhaps a more impressive film than its ‘main course’ Tel Aviv On Fire. It’s pure comic delight, including a young boy running up a hill to go ‘piss in Algeria’ because it’s the country his favourite footballer is from. He is the youngest of two brothers, who accidentally find a donkey on the side of the road carrying bags of white powder. The oldest immediately recognizes these for the valuable drugs they are, but pretends it’s just laundry detergent to his brother. A lie he will regret later, resulting in a beautiful visual gag at the end of the film. Another great visual gag is made when the brothers load the bags from the donkey, and only their shadows are filmed, making the young boys’ movement look like a lovely little dance. And of course, the donkey is there because he’d been trained by birth to walk a certain way while listening to Adele, but the drug smugglers’ assistant mixed up Adele with a local singer named Hadel. You can stream the short for a small price on demand here).

Tel Aviv On Fire is also a light comedy dealing with dark matters. A writer on a Palestinian soap opera gets involved with an Israeli army officer whose checkpoint he has to pass through twice daily while travelling from home to work and back. The officer demands increasing involvement in the script, actually supplying scenes, while the writer tries to sort out his life and get back together with an ex-girlfriend. As the officer’s demands for a positive portrayal of an Israeli army general on the soap opera grow, so does the demand of the Palestinian financial backers for the opposite. Tel Aviv On Fire is a light-hearted way of examining the oppression of the Palestinian people in Israel, through the invasive checkpoints and presence of the Israeli army in their lives, raising the question of whether the Palestinian people might rather move away (the star of the soap is an ex-pat from Paris only there for filming) just to get out from under the Isreali thumb, or to remain and make the best of it at home. The film never delves too deep into the issues, and people on both sides of the issues will feel the other political side gets too nice a treatment. Nevertheless, during the festival it provided a nice break from the heartbreak of the rest of the day.

This heartbreak was provided by films such as Still Recording and For a Happy Life. The latter of these two might feel like yet another film in the mold of the aforementioned A Wedding (Noces) and What Will People Say, both dealing with Pakistani teenagers growing up in Western European countries, tasting the individualism and personal freedom of the west but not being allowed to fully partake by parents, extended family and the small community they’re all a part of. However, there are no white western lovers involved in For a Happy Life, and it’s not a girl but a young man being forced into an arranged marriage with his cousin. Not directly but by persuasion and complex feelings of filial duty, shame and not wanting to upset his family.

For a Happy Life

Mashir’s heart is set on Amel, however, an Algerian girl who is close friends with his younger sister, and very much a part of their shared Muslim community in Brussels. At the wedding of his older brother, his mother even says she “looks completely Pakistani.” But she’s not, and thus he’s afraid his family won’t accept her as marriage material. Complications ensue as his cousin arrives from Pakistan and becomes fast friends with Amel while Mashir’s mother and uncle make arrangements to wed the cousins.

The desperation of the young people as their world seems to close in on them is palpable, though not as suffocating as in What Will People Say, especially Amel won’t accept the marriage machinations nor her father’s sternness without a fight, resulting in a very dramatic climax. Amel might be steeped in conservative Muslim culture, she feels she’s just as much a part of the western world around her. She says as much to her father, attacking his hypocrisy in dating a white Belgian woman (he’s a widower) without ever even talking to Amel how she might feel about this, but policing her life choices to a severe degree. A mid-credit scene gives hope for a future in which these young people in love can decide their own fate, almost as if we’re gearing up for a sequel follow-up.

No such hope is to be found in the final scene of Still Recording. The title of the documentary is a quote from that final scene, in which a camera keeps recording after the cameraman is shot by a sniper. He’s not the only young man wielding a camera who died during the years of the making of Still Recording, a film edited by two of them after they escaped the Syrian Civil War. It’s a disquieting, shocking ending that does prove the maxim mentioned earlier in the film. The image they record lives on, as a document of the war and of the hardships and heartbreak the citizens of Syria suffer as a result of the years of war and strife,

Still Recording was recorded from 2012 to 2015 by young men who were part of a particular group of rebels against Assad’s regime. As such, the documentary is far from impartial and chaotic in its storytelling, but no less compelling or heartrending. We’re dropped right in the middle of the already ongoing war, starting with a massacre of both armed rebels and civilians in the city of Douma in 2012, as the siege by government troops starts. However, there is still an element of hope and youthful brashness in this group of young people living in the city, cut off from the outside world but still believing in victory over Assad sooner than later. In between firefights, there are also still parties with girlfriends.

This changes after news of Assad’s chemical attacks on his own citizens. Image of dead ducks and goats surrounding the area of attack are interspersed with the young people watching the news of an attack in another city. Weariness, hopelessness and bitterness set in, while more of the group of young men also end up dead. Meanwhile, the local population make ‘bread’ out of cow feed and the city landscape becomes ever more desolate, buildings increasingly hollowed out while the streets fill up with rubble. Still Recording is as much an indictment against the devastations of war on people and the human spirit as it is a celebration of that spirit finding ways to live and survive amidst the carnage, hunger and anguish.

This Outdoors article was published in May 2019