The Legacy of Tora-san 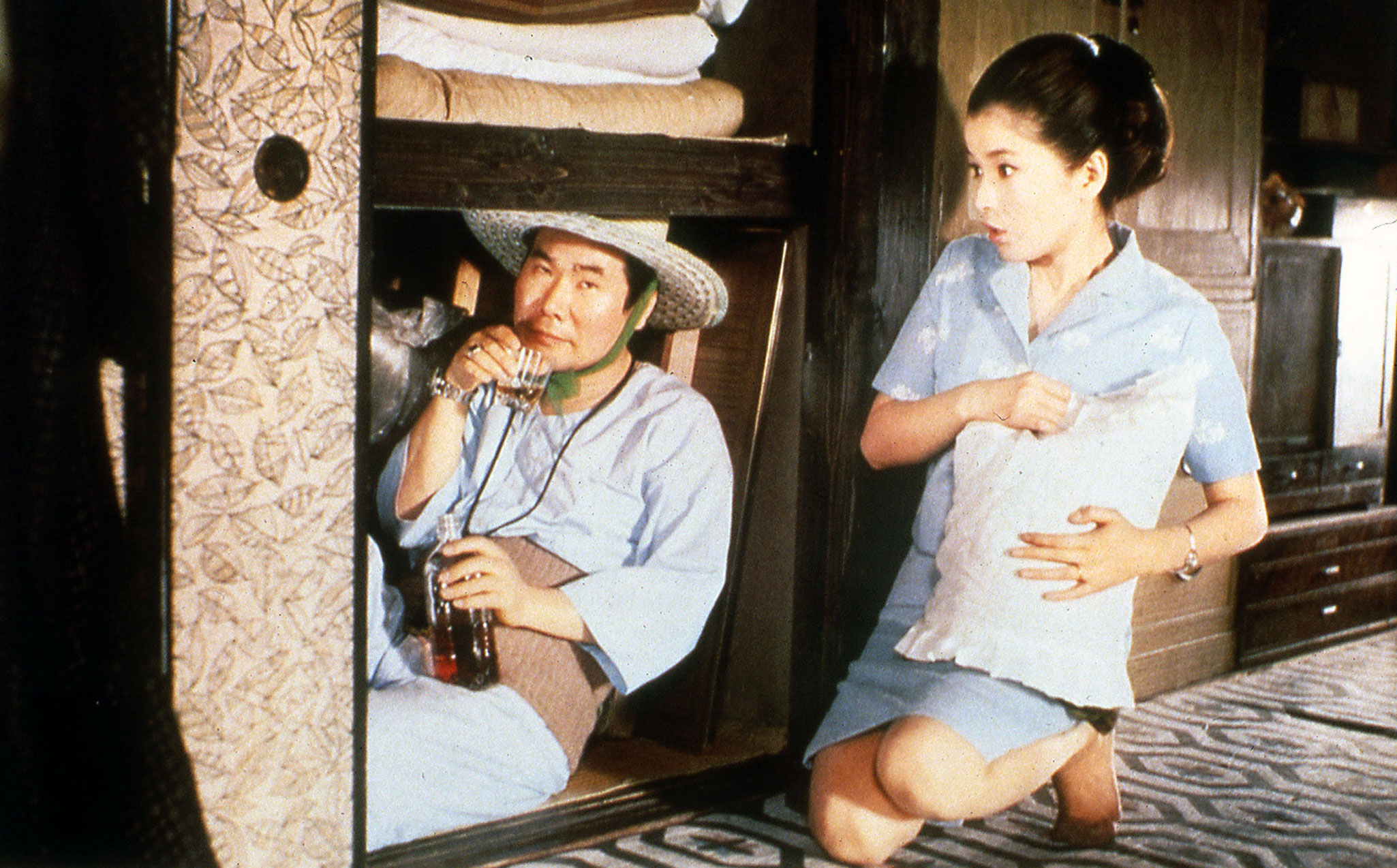 It’s been 50 years since the release of a well-meaning, somewhat conservative, yet lovable little film called It’s Tough Being a Man (1969). These days it’s more commonly known as the first instalment of the longest running film series ever starring the same actor: the Tora-san series. Directed by Yoji Yamada, the film presents the story of Torajiro (played by Kiyoshi Atsumi). He’s a vagabond and travelling salesman returning to his hometown, to meet with his only surviving immediate family member: his sister Sakura (played by Chieko Baisho), who lives with aunt and uncle.

The film opens with nostalgic black and white imagery that slowly gets tinted until achieving the full warm colours that the series is known for. Meanwhile, Torajiro narrates how he left Shibanata Katsushiha in Tokyo, after his father hit him so hard that blood was covering his face. When he first appears on the screen, he starts singing. There’s a “lived-in” quality to what we see in his return: the neighbourhood is lively with a festival: people dance and dress up in costumes, telling of the Japanese specificity of the town. At the same time this is observed in a way that could be described as touristic.

His return to his family home, reveals a lot about what made the series an instantaneous hit for the Japanese audience, and at the same time how alien it would seem to foreign audiences at the time. There’s an undeniable sensation of guilt, love, and attachment that they all have, but the stakes are never incredibly compelling. The events that Tora-san, Sakura, and his family go through are the typical family problems of the average Japanese family through comedy, slapstick, and constant tearjerker moments.

Under the Shadow of Ozu

It’s Tough Being a Man came out seven years after the last Yasujiro Ozu film, and one could say that it carries his torch on a thematic level, following and chronicling the ways in which Japanese society, family and relationships change throughout the years.  It even follows a similar conservative outlook, which can only be fully understood from the viewpoint of the audience that saw these movies in Japan at the time. The difference is that Ozu, even when he did comedies, never managed to get the same level of success that the Tora-san series had, because he never had such an attention-grabbing main actor like Kiyoshi Atsumi. His facial tics, fast-talking demeanor and violent reactions to everything around him, make for an easy laugh and a quick understanding of the things at play. Ozu took his time, which earned him his international recognition, while Tora-san played for the home team.

There are many common elements in the situations and themes that Ozu explores in his films and those that appear in the almost fifty that comprise the Tora-san series. Although certainly, the series has much less reflection and depth, they still manage to tackle some important subjects for modern Japanese society. For example, in the first film, we see that Sakura is going to a marriage meeting, where a man will see if she’s suitable for marriage. Obviously, Sakura is dubious about how effective and useful a meeting like that could be, but Torajiro cuts her short by saying: “You think marriage meetings are old hat? You’re wrong”. He doesn’t add much reason as to why she’s wrong, except for the manifestation of a more conservative look at the traditions, even slapping his sister on occasions. Which contradicts Tora-san’s own thieving and swindling behaviour. And even if those moments where he enforces tradition are followed by big crying sequences, they are usually cut short with a gag, a fart, or a quick quip made by Torajiro.

Tora-san and the Male Fragility

The main “joke” or premise of these films is, essentially, about how fragile Tora-san’s sentiments are. They were ahead of their time with one of the most accurate portrayals of fragile masculinity. That can be demonstrated with the main theme of these movies: he wants to be free, he wants to roam the world, so at the most minor inconvenience that he has with his family, he leaves and travels around Japan. Yet he can’t seem to avoid coming back once and again, as each new film of the series starts with how Tora-san returns, once again, to his family.

Shochiku is celebrating the 50-year anniversary of the Tora-san series with restored re-releases of every film, a new blu-ray set, as well as the theatrical release of a new Tora-san film at the end of the year, again directed by Yoji Yamada. The mystery resides in how the film is being made, as the series stopped in 1996 with the death of Kiyoshi Atsumi, but all of that is kept under wraps. Other tributes have appeared in places other than Japan, like New York’s Japan Society’s who showed two restored Tora-san films: the second and the ninth one.

Establishing Tora-san’s and his Tropes

Tora-san’s Cherished Mother (1969), continues to cement the main character as a classic, lovable staple of Japanese cinema. The first film ended with him leaving his family home. This film opens with a dream sequence, something that will eventually become common for the series: In an autumn landscape he finds his mother, Okiko, a geisha that abandoned him when he was barely a few years old. In the dream, he says how much he longs to call her mother once again before either of them dies. This search for the mother speaks volumes about the male psyche: there’s no one more important to a man than his mother.

Tora-san’s return to his family home creates a similar big emotional scene, until his family members tell him that he’s only been away for less than a year. Despite the loving reception by his now-married sister, he says that he has to continue his travels. Tora-san constantly says, “don’t stop me”, but we understand that his behaviour is mostly manipulative: he wants to be stopped, he wants to stay, but he can’t articulate his feelings. That sort of attitude is, again, incredibly telling of how the male psyche works, both in its toxicity and how distorted doing that is. Eventually he falls into the house of a former schoolteacher, with whom he stays drinking and talking.

That’s when another recurring staple is introduced: Tora-san’s love interest. In this film it’s Natsuko, the daughter of his former teacher, someone he used to make fun of in school. Now, incredibly pretty to his eyes, tries to makes her laugh, feel comfortable and spends lots of time with her, even helping her father, especially when he gets sick. However, in every film this love goes unrequited, showing the main character as a lovable goof who fails to become an object of affection.

This failure is always due to the difference between Torajiro and the man that always “steals” the girl away from him. In this case, it’s a doctor from the local public hospital. That man doesn’t seem to be as interesting or funny, as Tora-san, but he supports her in her artistic endeavours. While the doctor attends her concert, Torajiro scams people at a local fair.

Already in this second instalment one can find the core message of the series. As the schoolteacher approaches death, he says: “life is made of meetings and partings.” Tora-san answers: “yes, life is really tough”. This sums up practically everything that comprises these films: meetings, departures, heartbreaks and friendships made on the way. It is through these events that the films incidentally touch on certain themes. For instance, in this second instalment, when he finally meets his mother the expectation from his dream gets upended. Upon meeting, she asks him if he searched for her to ask for money and breaks his heart. Life is really tough.

The Freedom of Tora-san

Much more interesting is the ninth instalment, Tora-san’s Dear Old Home (1971). In another dream sequence,  we see Torajiro playing a samurai-like character, saving his sister and her husband. Not by using violence, but by paying the thieves so they leave them alone. The film is much funnier and tighter compared to the first two instalments, due to the two years and seven films in between. Despite a 107 minute running time, it feels breezier and lighter. It’s as if the director and cast constantly rehearsed to be better each time, by working together on all these films in such a short period.

Torajiro returns to his family home once again, but doesn’t feel welcome because they’re renting out his room. Everyone tries to assure him that he’s welcome anyway and they only did it to make money, so Sakura can buy a house for her new family. Nevertheless, he feels offended and goes to look for a room to rent. When the intermediate brings him to the cheapest place, it turns out to be his family home. An incredibly funny sequence, thanks to the interaction between the bit players: From the new actor playing the uncle (after the original died between the production of the 8th and 9th film) to the renting intermediate (who wants his commission even if they won’t charge Tora-san any rent).

Tora-san’s Dear Old Home also has some beautiful moments, like when he meets three women who are taking a trip around Kyoto. After he leaves them at a train station at dusk, he sees the train move into the horizon. Only then upon checking his wallet, he realises he’s spent all he has to give these women a good time. One of them, Utako, becomes the love interest of this film. The story mostly focuses on how much Torajiro falls in love with her, only to be disappointed once again. When she confesses how she only wants her father to accept the man she loves, a pottery maker in a small town, the movie turns into a road of self-acceptance for Tora-san.

It’s curious how uneventful, yet more fulfilling this film feels. It’s the charm of a series like this: one comes to accept and expect certain things of life, just as one expects certain events and staples in a film series. One learns to love the character of Torajiro, no matter his flaws, but mainly because of how exposed he is and how openly he manifests his sentiments and feelings. We understand how structured the films are, so we start to evaluate our experience not based on originality, but on how good the story is in each iteration. The flow of these things that we accept and expect, is what makes or breaks the individual instalments.

Tora-san’s Dear Old Home is showing tonight at the Japan Society in New York, while It’s Tough Being a Man will screen for a week at the Film Forum, starting October 11th.

This Outdoors article was published in October 2019