The Sensory Cinema of Alain Resnais 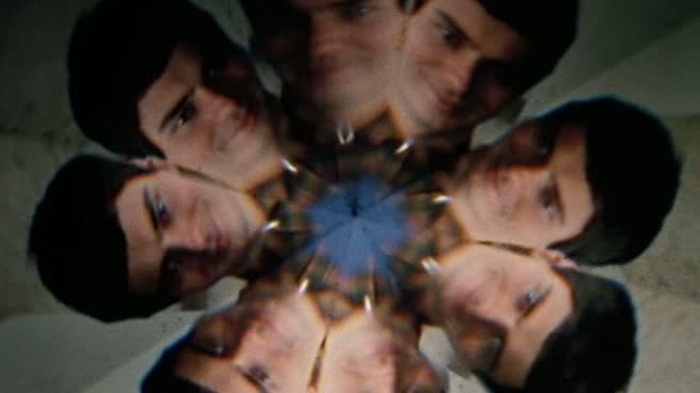 “As we see spaces and landscapes open before us on screen, Resnais reminds us that spectatorship may be upset from a fixed viewing position, that film viewing may be more bodily, more visceral, that the film may be a journey, a space of contact and encounter, playing on the senses and emotions conjured.” – Emma Wilson

Already in the introduction of French Film Directors. Alain Resnais, Emma Wilson makes clear how versatile, and therefore interesting, Resnais’s cinema is. Not only was he interested in the function of the brain, the process of a personal or collective trauma and the notion of time, he was also concerned with the tactile, so it seems.

Every film of Resnais contains several scenes that focus on the haptic. Not only is the tactile in his films present in different ways, but it also has various sensory effects on the viewer. So, how is the focus on the tactile presented in his films and which sensory experience tries Resnais to effectuate with these scenes?

“During the Liberation, I loved a girl. Do you mind if I tell you? We have nothing to hide.” Alphonso starts to tell Hélène about this girl, who was abandoned in 1939. She was treated badly. Alphonso felt pity for her. “That’s our story!” interrupts Hélène in shock “Not at all,” answers Alphonso. “Let’s not rake up the past.”

So, for what reason did Alphonso come to his former lover and widow Hélène (who invited him), if it is not raking up memories of the time they were happily together? The situation gets even stranger when Hélène leaves her guest behind in her own house and disappears with another man because she must go out.

Alphonso starts wandering around in her apartment. He opens several doors and switches lights on and off again. He finds one room interesting enough to stay a bit longer. He opens a drawer, where he finds the gun of Hélène’s stepson, Bernard. Alphonso closes the drawer quickly, looking questionable. He pushes the buttons of an audio recorder without any result. The next shot shows Alphonso skipping through some clothes. He finds what looks like a diary. It contains notes about Muriel and photos made during the war in Algeria. Alphonso holds one photo in his hand. It shows a young girl and a man whose face is made black. “Since Muriel, I can’t live,” one of the following notes says.

Alphonso stands in the doorway. He is about to close the door. “Poor Hélène,” he concludes.

Initially, it seemed that Alphonso was looking for more information about Hélène, about what she has been through and what kind of person she became after Alphonso and Hélène were separated, by looking through and touching her possessions. Resnais emphasises this by filming the objects (with or without Alphonso’s hand) in close-up. However, Alphonso, and so the viewer, not necessarily learns more about Hélène’s past, but rather about Bernard’s. At the same time, Resnais makes us curious for what has happened, in which situation Bernard was involved and who Muriel was or is, by showing only a part of the information Alphonso has in his hands.

But why should we feel sorry for Hélène, why does Alphonso do so? Well, after all, she lost her former lover Alphonso, she lost her husband and her stepson probably deals with a big secret she knows nothing about. Poor Hélène indeed.

A similar way of emphasising the tactile and trying to effectuate emotional bonding with one or more characters can be traced in Providence, a film about the alcoholic writer Clive Langham, who spends a painful and sleepless night in bed, composing a story starring his family members. Apparently, he isn’t very keen on them, since he criticises their behaviour continuously and pokes fun at them. The story Clive composes, so in fact, his thoughts can be visually seen during the film.

After this horrible night, Clive sits in his garden. It’s is birthday and he his waiting for his family to come and visit him. Birds are singing, the domestic help set the table. Then, Claude and Sonia, his son and wife, arrive. Clive reaches for them. Both Sonia and Claude literally make contact with Clive, by touching him. Sonia gives Clive a hand, which is shot in close up. The action is repeated. Sonia gives him a kiss. Claude rests his hand on his father’s shoulder, which is again shot in close-up. Claude kisses Clive’s head.

His son tries to make contact with his father, but he seems to fail. Sonia’s present is much appreciated; Claude’s on the contrary is made ridiculous. Sonia touches Claude’s leg: she feels sorry for him. “Claude easily shies away from you, he always has,” says Sonia quite sadly, after Claude let the two of them alone. Clive looks at his son in a grumpy way and can’t say anything positive about his son. He believes that Claude has never adored him, “although he might not will admit it”.

During the largest part of the film, Clive gave a negative view on his family, which makes the characters less sympathetic. But in the last part of the film, it is rather Clive himself you get less sympathy for. Claude actually does seem to appreciate his father. He really tries to make contact with him, by laying a hand on his shoulder, kissing his head and starting a conversation, but Clive refuses every trial. The viewer starts feeling sorry for Claude. He might not be as stupid as he was portrayed by his father.

Whereas Muriel and Providence focus on the tactile via a character in order to give us more information about a situation or relationship and provokes a particular feeling about it, Les statues meurent aussi and Nuit et Brouillard (1955) approach the haptic in a more direct manner, considered from the viewer’s perspective.

Les statues meurent aussi is a film essay about African art and how it is perceived (with our knowledge about colonialism in our minds). “And when we disappear, our objects will be confined to the place where we send black thing: to the museum.”

“Black art, we look at it as if it had its reason for being in the pleasure it gives us.” Western people pass by the objects that are exposed in the museum’s displays. The voice-over criticises this kind of voyeurism: western people aren’t able to understand the emotions and the intentions the African artists had while making these objects.

Then, the tables turn. The viewer of the film becomes at the same time the visitor of the museum. African art objects appear on the screen, one after the other. Resnais makes the viewer the one who enjoys black art. The camera gets closer to the objects or they are filmed in a tracking shot, in order to simulate a visit to a museum. It feels like you are walking around, along to the exposed objects, getting closer to the ones you finds most interesting.

However, this feeling of walking around in a museum full of African art doesn’t feel very comfortable. Because to the critique of the voice-over, it feels like you should be ashamed that you’re watching these objects, of which a lot come from a destination unknown, let alone that we know what these masks, statues and utensils mean. How can one walk along and enjoy this kind of art and cultural expressions that is so strongly connected with colonialism, a black our black history?

Ten years after the end of World War II, Alain Resnais directed Nuit et Brouillard, a short documentary film about the Nazi concentration camps Auswitz and Majdanek. It alternates between past and present, between black-and-white archive material of those camps in the 1940s and newly filmed colour images. The film starts with tracking shots along the gates of one of these camps. The camera takes you along the field that lies behind these gates. The atmosphere is peaceful, which is emphasised by a peaceful music score. It is like nothing horrible has ever happened here.

Unfortunately, we know better. The camera follows the train tracks that were used to transport people to the camps. It walks you along the beds, where the prisoners lay, without a blanket or a mattress, but with two or three other prisoners to you. Resnais shows you from real close a puppet, an empty package of cigarettes, pages with notes, made, hold and written by the hands of innocent prisoners.

Not getting an unpleasant sensory experience while watching Nuit et Brouillard is impossible. But at the same time, the contrast between the peaceful tracking shots along the field and the harsh black-and-white images is almost surreal. Although Resnais proves the concentration camps existed, it is so hard to imagine that these horrible things did happen, even if you watch the documentary more than 70 years after the end of the war.

It can’t be denied that Resnais is highly interested in the tactile, but these scenes that focus on the haptic do more than just exposing objects in close up or in a tracking shot, via a character or directly to the viewer. They make you curious or feel sorry for a character. They might cause identification with a character, make you feel guilty, awkward or even terrible. Indeed, Resnais’ cinema takes you on the journey, but be prepared. It won’t be a joyful trip.

This Essay article was published in October 2018