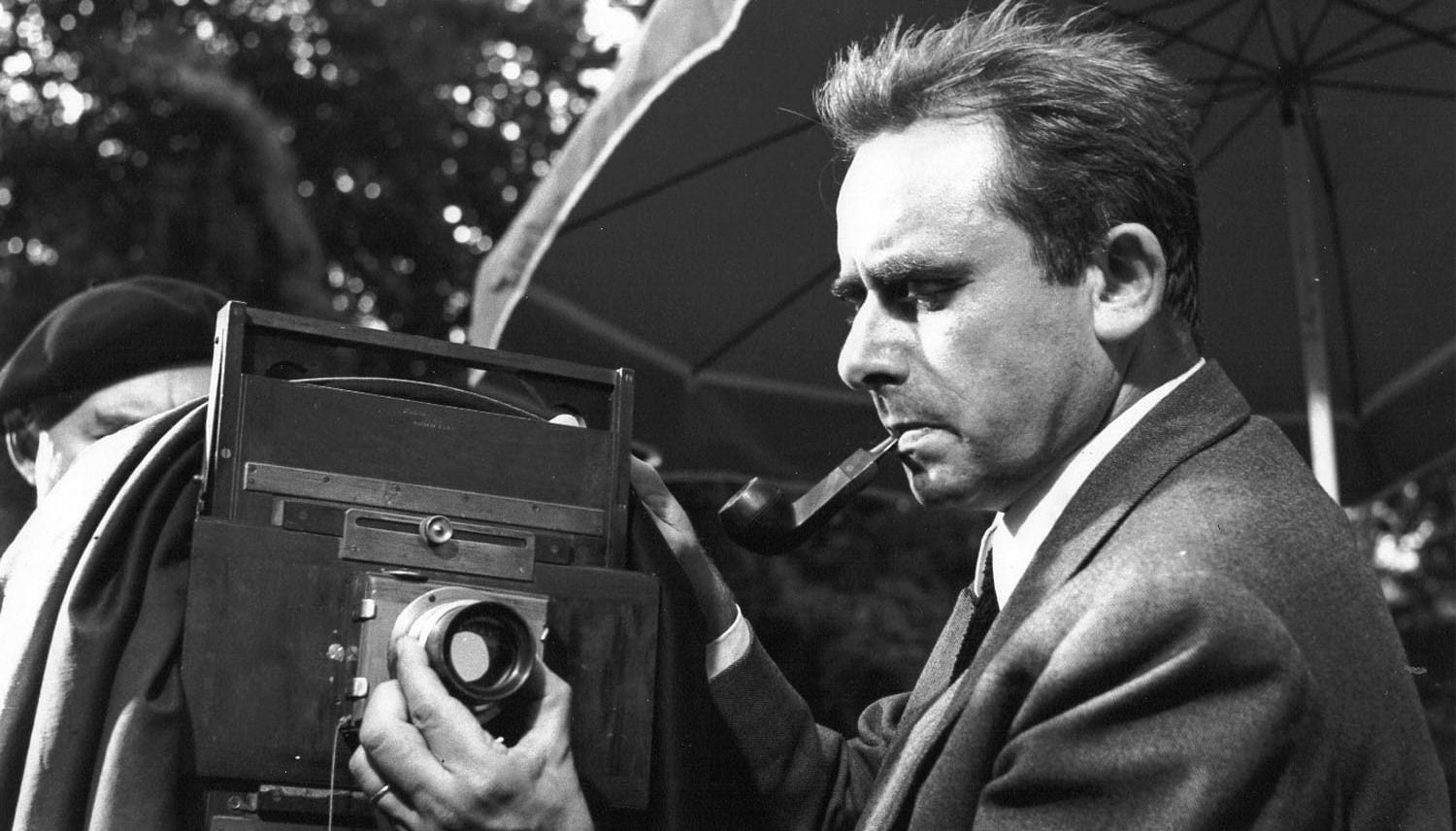 One of Henri-Georges Clouzot’s most famous films is a documentary entitled The Mystery of Picasso (1956). In this study, he sets up a translucent screen, backlit, which allows Picasso to remain invisible as the drawing or painting appears, which we see from the other side, as if by magic. Thus we witness the work of the great craftsman taking shape – from the first brush to the last stroke. In the first scene, we see Picasso shuffling around modestly while an authoritative voice-over muses how wonderful it would have been to be inside Rimbaud’s head when he wrote Le Bateau Ivre or Mozart’s when he composed Symphony nº 41: “Thank God”, continues the voice, “that what is impossible for poetry or music is possible for painting. To understand what goes on in a painter’s head, it’s enough just to follow his hand”.

In this way we witness the canvas taking shape. To begin, Picasso usually draws a human shape. In the first few paintings, a woman’s breasts are sketched, then covered over by other lines and shapes. If we are supposed to be learning something about the artist – we could guess that Picasso dreams about the female body, about sex. But we don’t know exactly what a woman’s breasts signify for Picasso – perhaps it is sex, but then again maybe it is tenderness, nourishment or creation itself. Knowing what’s actually going on in an artist’s mind is tricky (and thank goodness for that – think of all the wonderful artists who have unfortunate, if not outright odious ideas). This doesn’t stop us from admiring his craft: the film is astounding when it shows us how Picasso uses colour. Out of nowhere, he creates a bold line of blue, or red, and the audience is dazzled by the simple appearance of colour itself.

Clouzot was born in 1907 and died in 1977, and France is celebrating his life with the release of new DVD collections of his films, an exhibition at the Cinémathèque at Bercy entitled The Mystery of Clouzot, screenings throughout the country, lectures, conferences, exhibitions of photos and even concerts. Needless to say, when it comes to celebrating its own cinema France rarely does things by halves.

By naming the exhibition The Mystery of Clouzot after a film (The Mystery of Picasso) about understanding an artist’s creativity through his art, the organizers seem to be inviting us to understand Clouzot by showing us his work. Indeed, a critic’s job is partly to interpret a film in itself but also to understand the context in which the film was made, including the mind of the director. Looking back at Clouzot’s work now that he has been dead for 40 years – Nabokov, Chaplin, Rossellini and Howard Hawks all died in the same year – we will try to trace something of what was going on in his head – as we navigate the history of this great film-maker’s work.

In the exhibition at the Cinematheque Française, a number of his notebooks are displayed, filled with obsessive lists of places, actors and potential film titles. Sketches for his last film La Prisonnière (1968), a commercial failure and an altogether strange film, show the extent of his attention to detail and the way he micromanaged film shoots. Storyboards, costumes, posters, and photos from his private collection, which accessorize his body of work, show the importance he attributed to the idea of the gaze. Small faces peek from behind doors; the wide blank eyes of a dead man stare from a pool of blood. This fetishized collection of objects reminds us just how much Clouzot was aware of both the critical and of his own gaze.

Often Clouzot is referred to as the “French Hitchcock”. It’s undeniable that both were addicted to suspense. Both fascinated with the power of cinema to deceive, baffle and bewilder an audience. But while Hitchcock was prolific, and celebrated in his time, Clouzot was plagued by bad luck, ill health, accusations of being a Nazi sympathizer (because he collaborated with the Nazi-run film company Continental Films), and a failure to complete planned ventures which he took with him to his grave. Probably the most famous of these is L’Enfer, which was epically completed by Claude Chabrol in 1994.

Those films that he did manage to make are impressive. The first three were thrillers that constitute an uneven triptych; The Murderer Lives at Number 21 (1942), (a commercial success); Le Corbeau (1943), and Quai des Orfèvres (1947). Le Corbeau was criticised in France both by Vichy supporters, and by the resistance for being Nazi propaganda, it was thus banned for many years. In 1949, he released the fiction Manon starring Cécile Aubry. That same year he made Retour à La Vie, a series of five portraits of individuals returning from the war and trying to re-establish their lives. By turns sweet and touching and then quite hilarious, Clouzot exhibits a new potential in this film. The portraits show these veterans as irreparably damaged, but he manages to carry this out with a tenderness and humanity which has a uniting potential in pain.

In 1960 he makes one of his last, and in my opinion greatest films, La Verité, starring Brigitte Bardot as a woman on trial for the murder of her lover. Bardot plays Dominique Marceau – a 22-year-old woman – a femme legère as the lawyers repeat endlessly. She has shot her erstwhile lover who brushed her off in favour of her sensible sister, precipitately putting an end to an enthralling love affair. The trial is a passionate proceeding of diverging opinions and the airing of stuffy morals. At one point, a witness shouts at the judges:”You cannot understand us and so you cannot judge us. We are young and we need to be judged by a young jury”. Near the end of the film is a remarkable monologue pronounced by the heroine in which she howls at the pious mass “You are all dead”, the phrase seeming to emerge from a deep unsteady place inside her. For Clouzot, these words that he himself had written would, ironically, return on him when the next generation of film-makers, the avant-garde Truffaut and Goddard, both rejected his films scathingly in the Cahiers de Cinema and elsewhere.

The trial within the trial in this film tells us something about what truth means for Clouzot. There is a hopeless cynicism that pervades every second of every frame. But there is also beauty in this desperation. Bardot later told the press that she experienced it as though it were her own trial: her life of depravity judged in front of France in its entirety. Indeed, the emotional intensity of the shoot was such that she made another suicide attempt just a few weeks after the film was finished. Society is also on trial in this film – a society in which the patriarchy forces paradoxical situations on women like lawyers confuse those who have never studied law into confessing crimes they did not commit. This is why the films of Clouzot are still relevant today. His way of considering the patriarchy in his films is decidedly modern, and unfortunately – still more than ever appropriate. His work still burns with an emotional and political intensity and relevance.

Clouzot was known for being an obsessional filmmaker – tyrannizing his actors and himself. He had a fragile ego and was known to take badly any affront to the God-like status he attributed to himself. When trying to make her act well for her famous monologue in the film La Verité, Clouzot slapped Bardot in front of the whole crew. This was standard practice with Clouzot. Surprisingly for both of them (as she would later write), she slapped him back. But he then crushed the heels of his boots into her naked feet, making her weep in pain and run away. There are other horror stories from the making of that gorgeous film; several of those working on the set have reported Clouzot drugging Bardot and goading her into emotional breakdowns.

More than fifty years later, these stories seem perhaps anecdotal, even quaint. But they point to a larger system of patriarchal exploitation of women and recent evidence proves that there is a pattern in the film industry which has not changed and is not shifting quickly. All the things I’ve recently read that have come out about Weinstein’s sophisticated network of lawyers and spies came back to me while I watched La Verité. The radio station France Culture recently broadcast a programme entitled “Clouzot and the Bad Girls: Henri-Georges Clouzot; he wasn’t as misogynistic as we thought” in which the journalist argues that the women he portrayed in his films all seem to have very strong characters. Certainly, but this underlines a sad paradox. Films like La Verité which praise “female liberation” belittled and degraded them in the making.

Among the spate of allegations against men who have abused their power, Bardot has quietly told a story of her own. A few days ago she spoke publicly about how John Lennon turned up naked and aggressive in her bed one night. French reports treated it as a trivial matter – a funny incident in the long-distant past. Bardot is the actress that the French love to hate. She has made cruel and bigoted statements about minority groups yet loves animals and created her own foundation to protect them against cruelty. It’s funny that people have so much trouble seeing that this paradoxical and disturbed behaviour is partly a sad reflection of her own life.

In Paris, a friend refused point blank to come to Clouzot’s The Mystery of Picasso, pointing out that latter’s sexist views of women. But avoiding specific artists because of their reputations is not a satisfactory solution to me. I was glad I got to discover the work of Clouzot and his universe. His writing is filled with insight and witty retorts, and his attention to detail is a luxury for the spectator.

I can’t see into the director’s mind. Even in his voice-over about Picasso, Clouzot too must have known that this could not be done. Picasso’s impish grimaces at the camera showed that he knew it too. But Clouzot was surely not dishonest in this regard. As he once said: “What is interesting for a film-maker is to manage to make people believe something is true when it is not. ”