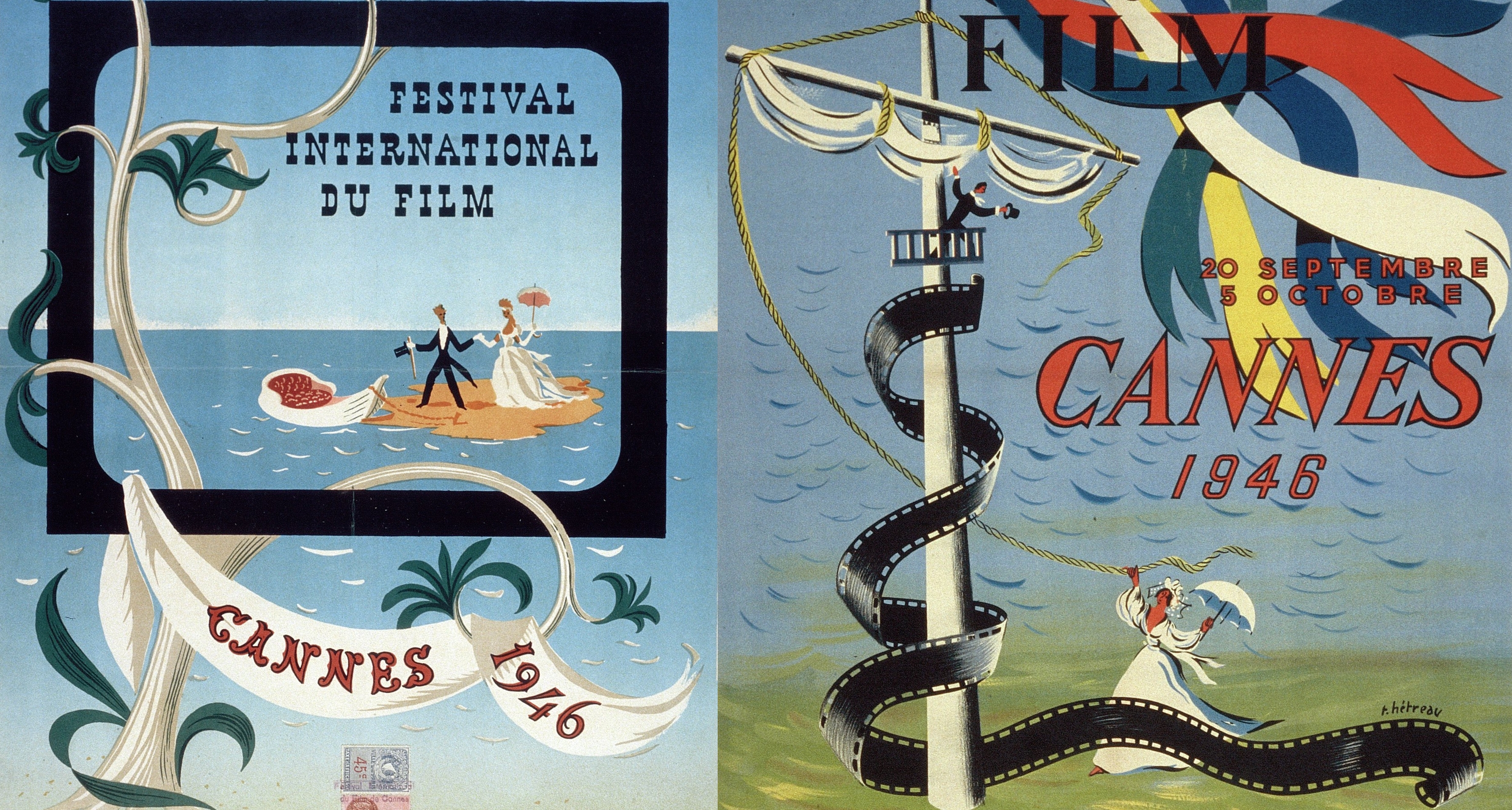 Europe was still reeling from the massive death and destruction from World War II, when in 1946 the very first edition of the Cannes Film Festival was held. The Palme d’Or, that most prestigious of film prizes, didn’t exist yet. Its predecessor, the Grand Prix du Festival International du Film, was the highest prize of the festival. In 1946 it was awarded to no less than eleven films, out of a competition of fifty-five films from twenty-one countries. Most of which are about the war that wrecked the world in the previous six years.

History has canonized David Lean’s Brief Encounter (1945), Billy Wilder’s The Lost Weekend (1945) and Robert Rossellini’s Rome, Open City (1945). So of course, as the 2018 Cannes film festival starts in earnest today, we at Frameland take a closer look at some of the lesser-known winners of Cannes 1946, including Mexican, French, Danish and Soviet films, and the only ever Swiss and Indian films to win the main prize at Cannes.

The skies in Emilio Fernández’s movies is an unforgiving and gorgeous curtain, ornate, bright, hazy, ominous, false in the hope and freedom it promises. The clouds billow and threaten, portending thunder, tears and death. Dolores del Río makes her appearance framed by their blinding glow in a landscape split by flora. The film is in Academy ratio, but it looks like ‘scope. Del Río’s luminescence seems to expand the frame and Fernández’s generous compositions and gently moving camera accentuate her effect: she seems to make the world a bigger place. Fernández did for melodrama what his friend and collaborator John Huston did for prestige literary adaptations: he brought us into their world through the impossibly beautiful faces of his stars. Del Río’s roving eyebrows, the way emotions cascade down her long and elegant face, stopping at her powerful, dignified jaw. She has the same inner strength as Henry Fonda or Danielle Darrieux, and she’s the perfect subject for Fernández restless, earthy expressionism. Fernández orchestrates Busby Berkeley or Vincente Minelli-style elaborations but he does them on rivers and in rocky passages. María Candelaria is his Gone To Earth (1950), a tale of beauty and sexuality as a stain on society. “This is our land, look how dark, and how soft?” Fernández invites us to confuse her exuberance and grace with Mexico herself, easily misunderstood, easily destroyed.

André Gide’s novel La Symphonie Pastorale explores a darker side of Christian love on a level that its adaptation hardly achieves. Jean Dellanoy’s film about a clergyman who takes care of a neglected, blind girl, has its merits though. The film adds to the symbolism of the novel, which is very much about how the world, and therefore morality, is perceived through the senses. Through the development of the once mute and blind girl, we witness in fact the birth of moral awareness. Michèle Morgan presents an almost angel like purity in her role of the girl. So pure she can hardly be seen as a human being. Apart from her beauty, it may be this, moral perfection that makes her so attractive to a clergyman. Dellanoy did not shy away from the controversial ending of the novel, making for a finale that would have been unthinkable in Hollywood of the time.

It’s not easy to judge Neecha Nagar as it was, when it was awarded that coveted prize at Cannes. For one, the surviving version that can be watched now is twenty minutes shorter than the film is reported to be, while this available version purports to be longer than the version shown at Cannes – because the version at Cannes had the dances cut out and only featured one song. Since there are six song sequences in the currently available version, one wonders what was cut out of this version.

It’s also difficult to imagine Neecha Nagar without these songs, since an important part of the characters’ emotions are expressed in these sequences, the sequences comment on the story and the film’s most impressive image is the highlight of a song: a nightly march of the poor people of Lower City against the municipal ruling class and its most important official. Who directs a sewage stream directly through their village so he can build and sell new real estate elsewhere, and so is directly responsible for diseases that sweep the Lower City.

Neecha Nagar takes a social realist approach to popular Hindi cinema, which is expressed in both the story of poor being exploited by the rich and in expressionist sets and experimental editing reminiscent of Soviet montage sequences – fitting for a film that stands up for the poor against the rich. Perhaps not the masterpiece one might expect given its pedigree, but an important influence on Parallel cinema.

Up close and behind the scenes at the battle of Stalingrad, Fridrikh Ermler’s The Turning Point is a complex large-scale production which ultimately aims to show the military superiority of the Russian army. It’s 1942 and a new general has been appointed to the army base, Muravyov (played by the great Soviet actor Mikhail Derzhavin). He clashes with Vladimir Nikitich (Vinogradov), another commander, who is tending towards caution rather than an all-out offensive to save the city.

Much of the beginning seems to involve playing petty power games, standing around near maps to talk of divisions and flanks, mixed in with dislocated war scenes, triumphant music over bombs and German planes falling. Ermler captures something of what one could imagine might be the stress of launching an attack. Rhythmically the film works to create tension.

What could have been a rather mediocre propaganda film (Elmer also won his second “Stalin award” for the piece), turns out rather fabulous because of some of the lines from the film (script by Boris Cirskov). When Krivenko and a fellow soldier who had been wounded are arguing about how much of the plan the former failed to reveal (the soldier is angry and refuses to talk “friend to friend”, but accepts to talk “communist to communist”), he responds soberly: “if only we could tell people everything during wartime… how much easier would it be?”
– Colette de Castro

Towards the end of WWII, a Danish resistance fighter (Poul Reichardt) recalls the events that lead to his imprisonment by the Nazis. It’s easy to see why this film by Bodil Ipsen & Lau Lauritzen Jr. was awarded a prize shortly after the war: It’s a clear-cut tale of heroic resistance to the occupation of Denmark, and it aims towards humanism by offsetting its caricature of a cranky, evil German warden with a soft-spoken, kind-hearted German guard. But seen today, the film can hardly leave an impression. High points include a neat narrative structure (the story is told, from different perspectives and partly in flashback, before, during and after the hero’s torture in prison), and one reasonably tense scene in which the resistance fighters confront a traitor among the group. Sadly, these are not enough to redeem the many low points, which include an inane role for the hero’s female lover, who gets all the worst lines and some crassly sentimental scenes. Worst of all, most of the acting — including the lead turn by Reichardt — is deeply unconvincing.

Like most of the films in competition at the 1946 Cannes Film Festival, The Last Chance by Swiss director Leopold Lindtberg is about World War II. In fact, the film is about two allied prisoners. An English lieutenant and American sergeant manage to escape from a train after it has been bombed in Italy. The two team up and try to make it into safe territory, Switzerland. On their journey, they come across quite a number of refugees who have the same goal and destination.

The film shows and treats the themes that go along with people who are involved in war. Especially the last half hour gives us and the many refugees time to know one another. This leads to some insightful conversations about the meaning of war and life, and you really start rooting for the refugees. Combined with some beautiful imagery of snowy mountains the ending makes up for the lack of pacing and immersion at the start of this film. With World War II as a recent memory awarding this film the Grand Prix is justifiable.

Karel Zeman was a film director and animator who is best known for his beautiful fantasy films that combined live-action footage with animation and special effects. Not for nothing he was called the Czech Méliès. Vánoční sen was his first experiment with combining live-action and animation. In 1946, it was rewarded with a Grand Prix International for the best short fiction film.

And Vánoční sen wasn’t even his own idea. The studio Zeman worked at that time was caught by a fire and damaged the short film that was actually Mrs. Terlovas’ creation. However, she didn’t want to start its production again and so Karel Zeman (a big fan of puppet theatre) was asked to produce the animation parts and his brother Bořivoj became responsible for the life action parts of the film.

In this short black-and-white film, a young girl finds out she has been given some new toys for Christmas. A good reason for the girl to throw her old rag doll away. That night, the girl dreams about the rag doll coming alive. He dances on the piano keys and skates across the table. When the doll turns on the fan the sea in a painting begins to wave. Although Karel Zeman had no experience with stop-motion at all, the animation is beautiful and charming.

Vánoční sen was released in the United States in 1948 as A Christmas Dream. This version included some new footage (of a Santa Clause) and a voice for the rag doll.