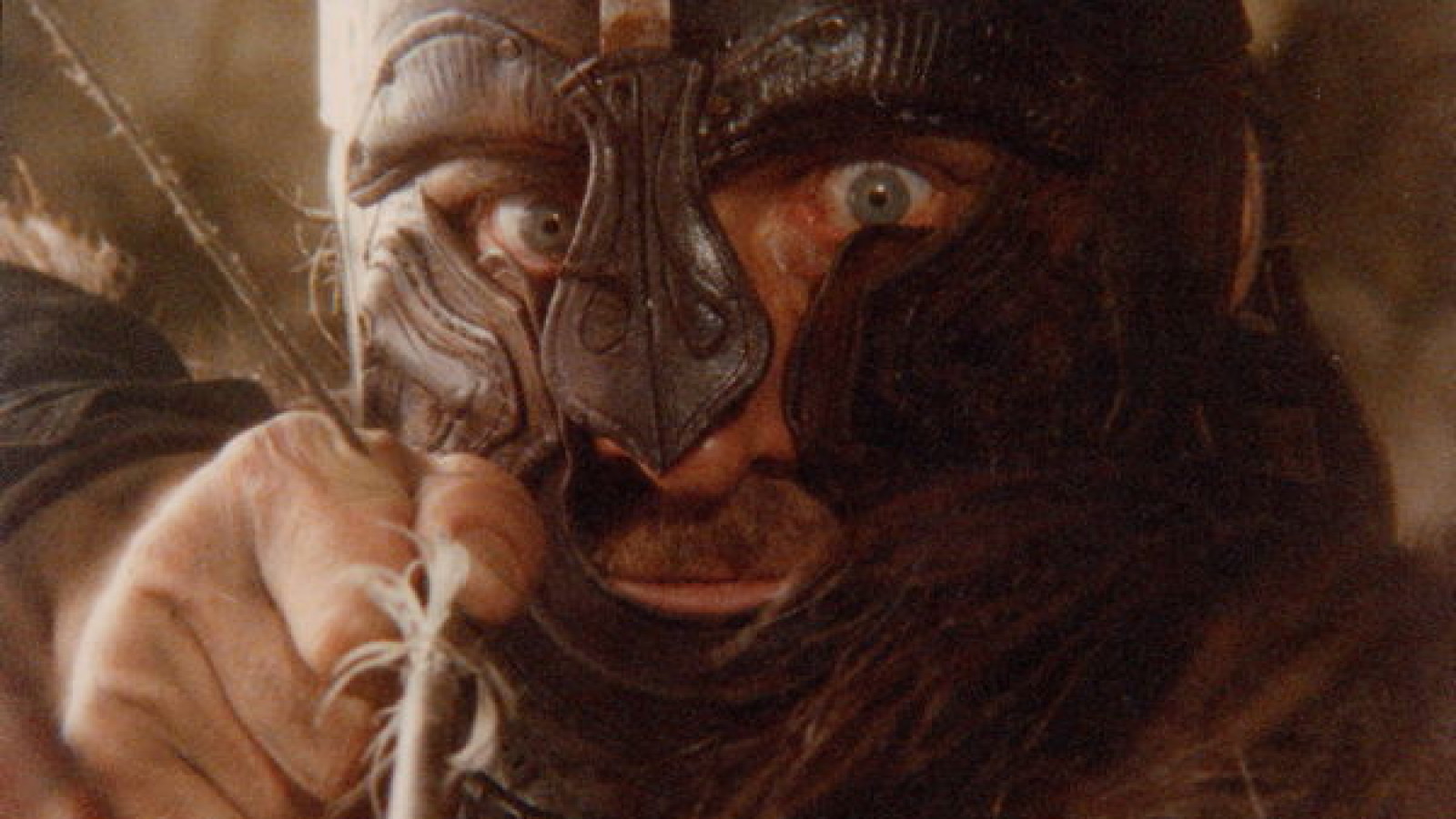 Christianity has defined Europe in such a way for so long, that it’s easy to forget it once had to conquer the continent. And that the Scandinavians were the last holdouts, in that regard. Icelandic director Hrafn Gunnlaugsson made three films, loosely connected by theme and setting, known as the Raven Trilogy or Viking Trilogy: When the Raven Flies (1984), In the Shadow of the Raven (1987) and Embla, also known as The White Viking (1991). All three deal with the violent clash between the old Norse gods and Jesus Christ.

This clash is present in all three films, though mostly in the second and third. When the Raven Flies is more or less a Viking version of Akira Kurosawa’s Yojimbo (1961). Or, more likely, a version of Sergio Leone’s A Fistful of Dollars (1964), to which it’s much closer in atmosphere. When the Raven Flies follows the same basic trajectory: stranger enters community, encounters two camps, pits them against each other until they destroy each other, while himself picking off strays to either sow discord or later finish the job.

But Gunnlaugsson is not just inspired by Italian westerns, he also looks to the Icelandic Sagas for inspiration. And so When the Raven Flies is also a classic Viking revenge saga, spanning across countries and decades and ending not on a resolution but on the promise of a repeat revenge cycle in twenty years time. It starts off with a Viking raid in Ireland, in which a young boy watches his parents being killed and his teenaged sister dragged off by the killers. Twenty years later, he arrives in Iceland to avenge his parents’ death and find his sister, who is now married to one of the killers and has a son with him.

He calls himself Gestur, an actual Icelandic name but which also means ‘guest’. His two main targets, Erik and Thord, have become local leaders, both with their own group of henchmen. Gestur creates chaos and emnity not only by killing a bunch of those henchmen, but also by messing with Thord’s temple, sending him messages from Odin and Thor, which confuse and terrify the devout man. Gestur himself is a Christian, and sees his revenge not just as personal but also as religiously justified. When he triumphs over his foes, he believes Christ has triumphed over Odin and he can now abandon the violent ways of the Viking and live a Christian life in Ireland again, with his sister and her young son Einar. But she refuses, believing that Einar would never accept such a life after everything he’s just seen Gestur do. So Gestur leaves, while Einar digs up weapons and vows vengeance for his father’s death. The Viking cycle of violence and vengeance will continue, it seems.

In the Shadow of the Raven almost feels like a direct sequel, continuing that cycle, since another young man arrives on Iceland to the same homestead (shot on the same location in Iceland) and temple where Thord used to live, and which his mother has ruled without a husband for years. But that’s where the direct connection ends. The young man is named Trausti, and In the Shadow of the Raven is a loose re-telling of the legend of Tristan and Isolde. Trausti’s mother is nearly killed by neighboring chieftain Eirikur over a dispute over who has the rights to the body a stranded whale. A blood feud starts, so typical of Viking sagas, but while Trausti swears vengeance on Eirikur, he falls in love with Eirikur’s daughter Isold.

Isold is also already betrother to another, the son of the local, powerful Bishop Hördur and his wife, always decked out in religious garb. They don’t take kindly to Isold rejecting this marriage and marrying Trausti instead. So they help organise their wedding while planning to kill them in secret. The wedding is a splendid affair, with traditional Icelandic folk songs and Christian hymns, a very young Noomi Rapace as extra. While Trausti ignites the flames of Isold’s love by starting their wedding night off with cunnilingus, the Bishop’s clan ignites their house around them. And the church Trausti’s late mother had build, because this Bishop and his rigid wife only care about their faith for increased status and riches.

Trausti survives the assassination attempt, but Isold dies. Another cycle of revenge starts, but this one is also faith-based. Even though Trausti, being the child of both a pagan Viking and a Christian mother, asks Odin to help Christ to help him defeat his foes, it’s clear that his belief represents a more true version of Christianity, while the hypocrytical Bishop and his evil family are the kind of greedy representatives of Church Martin Luther would turn against in about 500 years (In the Shadow of the Raven takes place in 1077).

Earlier in the film, Isold was presented amidst Mary, mother of Christ, imagery, but Trausti is neither Joseph or Christ. He may present the true faith, his idea of forgiveness for the man who killed Isolde, when the killer truly repents (as evidenced by an earlier church scene in which he asks Christ for forgiveness), is “I’ll forgive you when your dead.” Before killing him and then burning down the richly decorated church of the Bishop. It’s clear this film was made in a country long defined by Lutheran religion, that has no patience for the Catholic Church that was the only church in the time of its setting.

The White Viking, the third film in the trilogy, deals even more explicitly with religion. In the 999, King Olav of Norway is a fanatical Christian who aims to rip out the old Norse beliefs by the roots: either converse to Christianity, or die by fire or torture. He things he hears the voice of Jesus, though he calls him White Christ for some reason. The image he prays to is a Christ made from white wood, with a literally bleeding heart. He attacks a celebration of Odin, but instead of killing the man responsible he takes his daughter Embla hostage. He forces both her father and her betrothed lover to convert to Christianity, and spread the good word in Iceland, threatening to kill Embla if they don’t.

In reality, however, the king has fallen for Embla. The fact that she refuses Christianity and finds every Christian loathsome splits his soul, since he wants to marry her but also believes he can’t do until she converts. So he puts her in a convent, where woman are tortured into conversion and some strange sexual perversions seem to take place. Embla is pregnant with her pagan lover’s child, and since it was born ‘in sin’ the baby is taken away and killed immediately after its birth.

Early Christianity is presented here as something truly violent and deranged, void of humanity or compassion and represented by crazy fanatics. At the same time, King Olav is a fantastically odd creature. His version of “White” Christianity is utterly bizarre, so strange that at some point his insanity drives his priest to also pray to Odin, just to hedge his bets if this king is wrong. Also, he has only one eye and keeps crows as much beloved pets, two hints that he might be Odin. The White Viking is the only film of the three in which Christianity doesn’t triumph. Embla is never converted and manages to escape from Olav’s imprisonment, Askur survives with Freya’s protection. In an odd ending Olav gives up on trying to convert them and lets them be.

Together, all three films present a vision of early Christianity as mostly hypocritical and at best just as violent and vengeful as the Viking customs it clashes with, despite the lip service that these Christians pay to Christian concepts such as forgiveness and peaceful coexistence. Amidst a lot of Church burning, one thing becomes clear: the only way the Vikings could be conquered by Christ is to meet the violence and fury of their gods with an even greater furious anger. With the only real apparent difference being that the Viking beliefs are more honestly violent.