Twin Peaks: A Place Both Wonderful and Strange 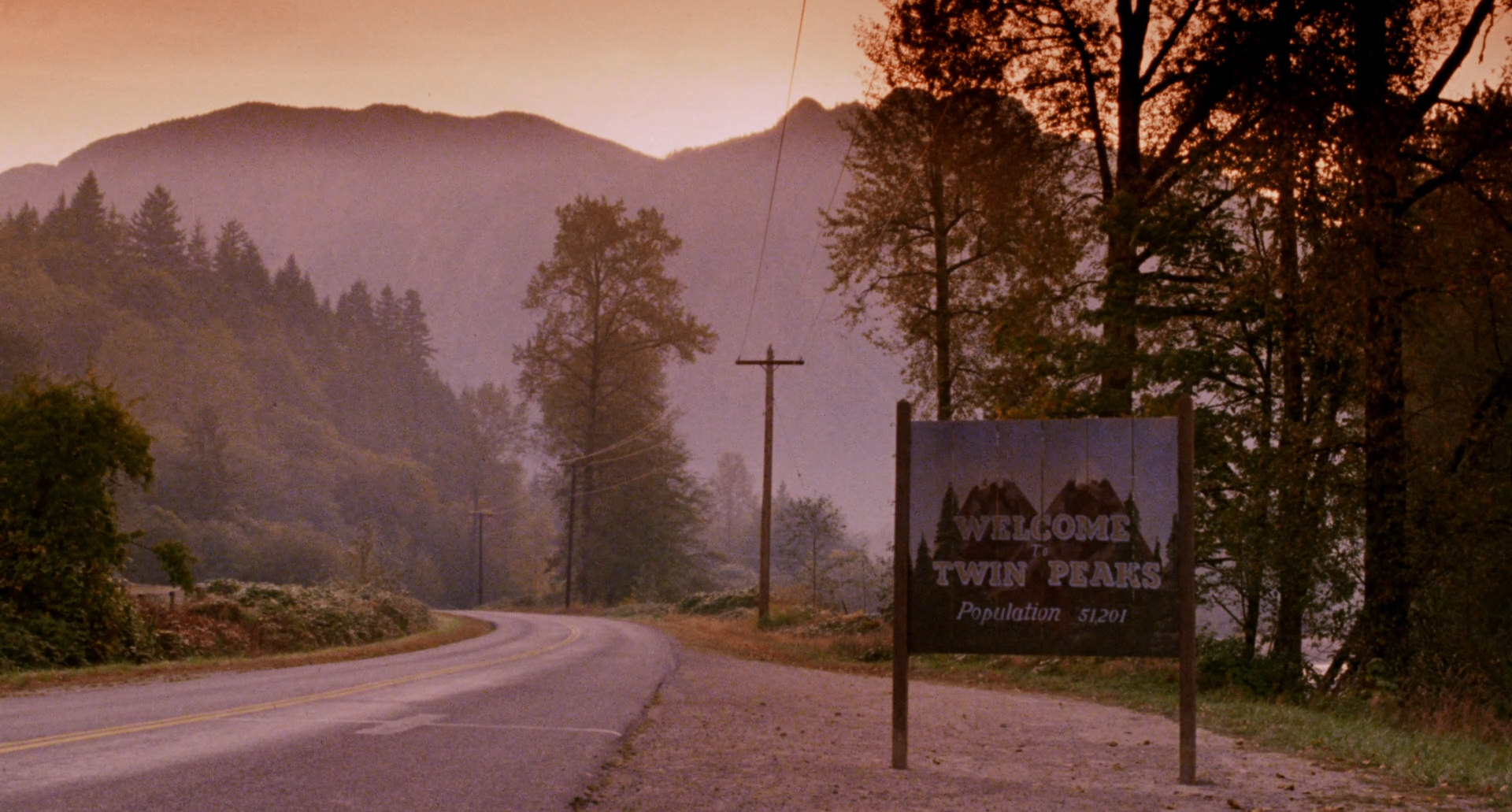 Cannes has just started. The biggest film event of the year, for a certain part of the industry. And one of the largest events of the festival is the debut of the first two episodes of the third season of Twin Peaks, the return of David Lynch’ and Mark Frost’s television show. We at Frameland have been looking forward to this launch for a long time now, ever since it was announced two years ago. Not the launch at Cannes so much, but on television, from whence it came. So, just before the first episode will be broadcast this weekend, several of us decided to remember why we’re all so excited about the return of Twin Peaks in the first place.

“More things in Heaven and Earth”

First, a confession, I only saw Twin Peaks for the very first time in 2016. Now for an even heftier confession: I didn’t immediately like it. There was something severely off-putting about Sarah Palmer’s hysterical screaming and the melodramatic music (shocker: I don’t do emotions very well). I persevered though, and Twin Peaks became something I not only adored, but something that would forever haunt me and inspire me in my own writing.

For me, the thing that resonated the most was the small town mythology that David Lynch weaved so intricately. The sense that beneath the apparent wholesomeness of fresh country living, there’s an evil lurking beneath. Or, as Sheriff Harry Truman puts it: “There’s a kind of evil, a presence lurking in these woods”. How else can you account for the town beauty having a cocaine addiction and is regularly sexually abused by her own father?

By personifying this evil, in the Black Lodge, and of course the ever-haunting Bob and his cronies, it becomes easier to accept that perhaps we don’t have that inherent evil or duality, perhaps we can blame something or someone else for it. Despite the implied horrors, there’s also a wondrous sense of security in that thought. Just by accepting the words of major Briggs when he states that: “There are more things in Heaven and Earth than can be dreamed of in our philosophy.”

I remember watching Twin Peaks for the first time about ten years ago. I knew David Lynch’ films and was already a fan, but Twin Peaks and Dale Cooper added a whole new dimension. For me Twin Peaks was not just another series, but an experience. Until this day I use quotes in my daily life. I watch the best scenes on YouTube. I even own a T-shirt with Dale Cooper on it.

What I love most of all are the atmosphere and good-hearted nature of several characters. Cooper is just about a perfect man. He is spotless, smart, spiritual, sensitive, but above all morally superior. His small idiosyncrasies, like the Tibetian bottle ritual, are the finishing touch. He fits in perfectly with the population of Twin Peaks. The idyllic location that feels almost like paradise. A place where you want to go and be again and again.

Then there’s also the mystery, the evil under the surface and the collection of odd and goofy characters makes this a complete experience. Who can forget the clumsy Andy, the Log Lady or Nadine Hurley? And FBI characters Albert Rosenfield and the hard of hearing Gordon Cole (brilliantly portrayed by Lynch himself) are so funny. It is the combination of the serious good versus evil themes, the strange situations and great characters that makes Twin Peaks entertaining but also strange and scary. For me this summarizes life in a beautiful way: A kind of paradise, with funny, odd people and details that give colour to life and makes it worth living. Even in a place where bad things happen.

A place both wonderful and strange

When Twin Peaks aired in 1990, I wasn’t even born yet. It wasn’t until ten years ago that I finally watched the show everyone was still, after all those years, talking about. It only took a little over a week to watch the two seasons. I wanted to know who killed Laura Palmer, but more than that, I loved the world of the series. I rewatched the show, I read The Secret Diary of Laura Palmer, The Autobiography of FBI Special Agent Dale Cooper, and the recent Secret History of Twin Peaks. Even though there are some strange and dangerous things going on, I didn’t want to leave that town, because there has never been anything quite like Twin Peaks.

There have been good TV shows that also brought cinema to television, like Mad Men, or suspenseful mystery drama’s like Lost or The Leftovers, or murder mysteries that focused on the inhabitants of a town, like Broadchurch and The Killing. But every show I watched, I couldn’t help but compare to Twin Peaks. The show that combined soap drama, murder mystery, teen flicks and supernatural stories, and even more so, added quirky characters like coffee lover Dale Cooper, dancing and dreamy Audrey or the eyepatched, silent draperunner-maker Nadine. Mark Frost and David Lynch added absurd humor, philosophical themes about good and bad, great music of Julee Cruise and Angelo Badalamenti, and, of course, donuts and cherry pie.

The announcement of a new season was the best news I heard in years, because, as Cooper said: ”I have no idea where this will lead us, but I have a definite feeling it will be a place both wonderful and strange.”

It does not take long for Dale Cooper to fall in love with Twin Peaks. Hardly has our FBI agent arrived for his murder investigation when he starts to consider buying a house there. This might at first come off as a cheap trick to reel in the audience, trying to make it vicariously fall in love with in this quaint town along with the closest there is to a protagonist (who shares its perspective, being an outsider looking in). However, the show seems to be sending mixed messages on the subject. On the surface it’s all Douglas Firs and cherry pies, but dig a little deeper and you’ll find murder, drug trafficking and infidelity.

The odd thing is, that Cooper gets confronted with all these dark sides on a daily basis, but he never gets disillusioned with Twin Peaks; his love remains all throughout the show. Does that mean it’s a shallow love, with Cooper ignoring all the nastiness as long he simply gets his coffee and donuts? Could be, but there’s probably a little more going on. Unlike most of Twin Peaks’s residents Cooper has seen the outside world and thus been given his fair share of dark stuff. His method to deal with all this? Just take it as a given. Innocence is overrated anyway. Try to deal with the bad things in life, but never let it spoil your enjoyment of the good stuff. His philosophy seems to be cynicism wrapped in a lot of optimism.

I was a teenager when I discovered Twin Peaks, shortly after discovering David Lynch. As we discovered the wonders and the horrors of Twin Peaks alongside Dale Cooper, we also discovered a new way of watching TV. Before Twin Peaks we only watched television shows when they were broadcast on TV. But the show was no longer shown on TV, and DVD was still a newfangled phenomenon for only the newest film releases. I don’t think any of us had a DVD-player yet. So for me and my friends, the only way to watch Twin Peaks at the time was to rent it on VHS, 3 episodes at a time. We rented one tape per week, because binge-watching didn’t exist yet and we couldn’t afford more anyway. And on school nights I had to go to bed early.

Since we were used to just watching series when broadcast, we had no idea what a pilot was. So when we started watching Twin Peaks, we started with the tape containing episodes 1, 2 and 3. Missing the introduction of the pilot, Twin Peaks seemed even more dreamlike than it would’ve otherwise. Then we learned of the pilot and watched that next. But this was the European pilot, that ended with another 20 minutes of disturbing scenes, in which the murder of Laura Palmer is already ‘solved’. But since these scenes were mostly reworked into a dream sequence in episode 2 we’d already seen, this only confused us further and made the scenes seem more unhinged. For us Twin Peaks wasn’t just showing us the darkness and mystery that lurks below known reality, it was turning reality upside down and suggesting there was no difference between civilized society and our darkest nightmares.