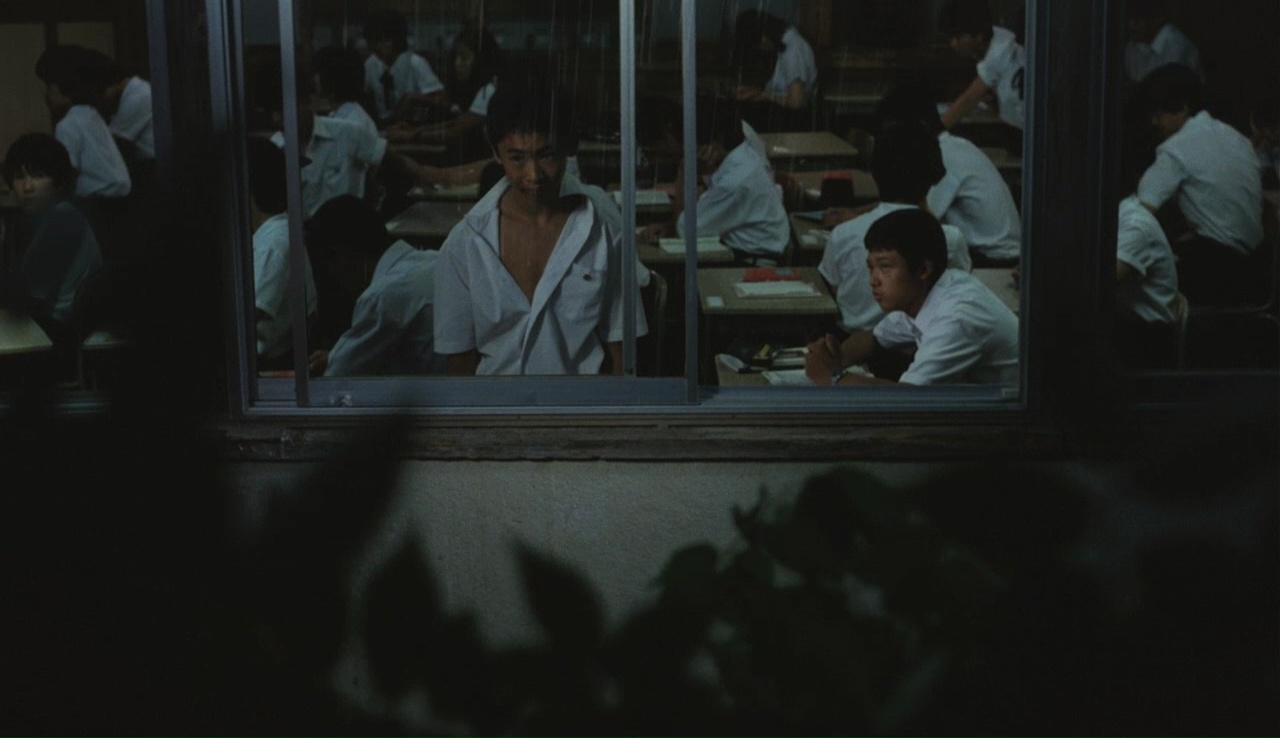 About halfway through Typhoon Club (1985), after a brief brawl in a classroom, the camera peers through a window from a high angle amid green, leafy trees. A boy, the collar of his school dress shirt stretched and ruffled, walks to the window as it suddenly starts to rain. “Perhaps, I’m the first one who saw the rain,” he says. He’s the first to stop and take note of the weather, at least that’s what he thinks. He’s the first to notice the signs of the typhoon that will strand him and a few of his classmates in the school.

In Shinji Sômai’s films, characters interact and engage with the natural world. More than a backdrop, the weather, especially its changes, accompany pivotal moments in his work. Lost Chapter of Snow: Passion (1985) begins with a long take in which the camera winds its way around a wintry village. A rainstorm provides the mood and music as a cabbie makes love to a woman that he had a one night stand with long ago during Love Hotel (1985). Later on in that film, the women in the main character’s life cross paths as pink petals fall around them. And Typhoon Club is the apotheosis of this thematic predilection. It is a film in which a typhoon pauses the inevitable flow of life and brings kids, junior high school students, with all their fears and desires together.

Shinji Sômai is a name that, although acclaimed in Japan, is relatively unknown everywhere else. And this is even after efforts to introduce his 13 films to a larger audience, like Chris Fujiwara’s complete retrospective at the 2012 Edinburgh International Film Festival. Unlike his peers, who were part of what Sadao Yamane, writing in Film Comment, calls a “post-postwar” generation-filmmakers like Kiyoshi Kurosawa and Juzo Itami—Sômai’s work is not in the Criterion Collection nor is it a significant part in critical, English-language discourse on contemporary Japanese cinema. And yet he is a major figure. Perhaps he would’ve gotten the recognition he deserved if, as Shigehiko Hasumi suggests in his Film Comment profile piece, the commercial success of his second film, a star vehicle for Hiroko Yakushimaru called Sailor Suit and Machine Gun (1981), hadn’t possibly “stereotyped Sômai as a skilled craftsman devoid of genuine creative ambition.” If Sômai is mentioned, it’s in relation to Typhoon Club, which got a US theatrical release in 1986. Critics, such as Vincent Canby in his New York Times review, too lazily refer to Sômai’s film as a Japanese Breakfast Club (1985). Is The Breakfast Club an American Typhoon Club? Such a pat shorthand may offer a hint of the narrative (kids stuck in a school for a specific amount of time), but it doesn’t convey Sômai’s aesthetic: long takes and traveling shots that feel their way around a classroom, a gymnasium, a swimming pool. Although not as polished as those shots found in a Kenji Mizoguchi film, the traveling shots seem, at times, imperceptible as the action unfolds onscreen—and at other times, conspicuously grand.

Typhoon Club consists of these invisible-visible long shots. Look at the way the camera moves laterally outside a home (like Jean Renoir, Sômai relates interior and exterior spaces, often with thresholds like windows and doorways), from one room to the next, stopping only to find a boy, Akira, at his desk. When his older brother walks in, he asks: “can the individual transcend its species?” He continues: “They say that one can overcome his species only through death.” The bars on the window, framing Akira in a small square onscreen, evoke his rigid, grid-like morbidity that taints the rest of his presence in the film. For another boy, the weather unleashes a rampaging animalism in him. Even before the storm, this boy, out of the blue, poured a vial of chemicals down a girl’s back, scarring it in the process. He refuses to look at the damage that he’s done, only later offering a weak sorry to the girl in passing. During the typhoon, however, without any adult supervision, he corners and assaults her in the dark, empty school. He rips off her shirt, finally touches the scars that are on the girl’s back for life, and then proceeds to thrash about on a desk, knocking over anything in his way. With minimal editing, the scene lasts eight uncomfortable minutes. The long take and the traveling shot are ideal formal qualities for Sômai. They situate people within a space; they represent people interacting with the elements, with the natural world. Near the end of the film, as the typhoon carries on, the kids dance, the camera slowly inching its way across the gymnasium floor, all the while kids slowly strip to their underwear, then peel them off as well. They carry their elation outside, frolicking as the rain pours down, which Sômai films from a distance in a pair of static shots. The subtext becomes the text; the children set aside their petty squabbles and come together.

The next day, however, turns grim. In a lateral traveling shot that echoes the one mentioned above, Akira jumps out of a window and to his death as the other kids look on in petrified fright. Yet the scene comes off as at once shocking, then surprisingly peculiar. The children race outside, discovering Akira’s body—as if in a Looney Tunes short—sticking out half-submerged in the briny water that floods the neighborhood. Akira’s girlfriend returns, having ran away from home and to Tokyo during the storm. When she sees the school, it’s different; surrounded by water, it now looks like the Golden Pavilion, the Zen temple in Kyoto. In Typhoon Club, the natural world comingles with mankind, transforming both people and places. Mother nature affects and infects everything and anything that’s a part of it.