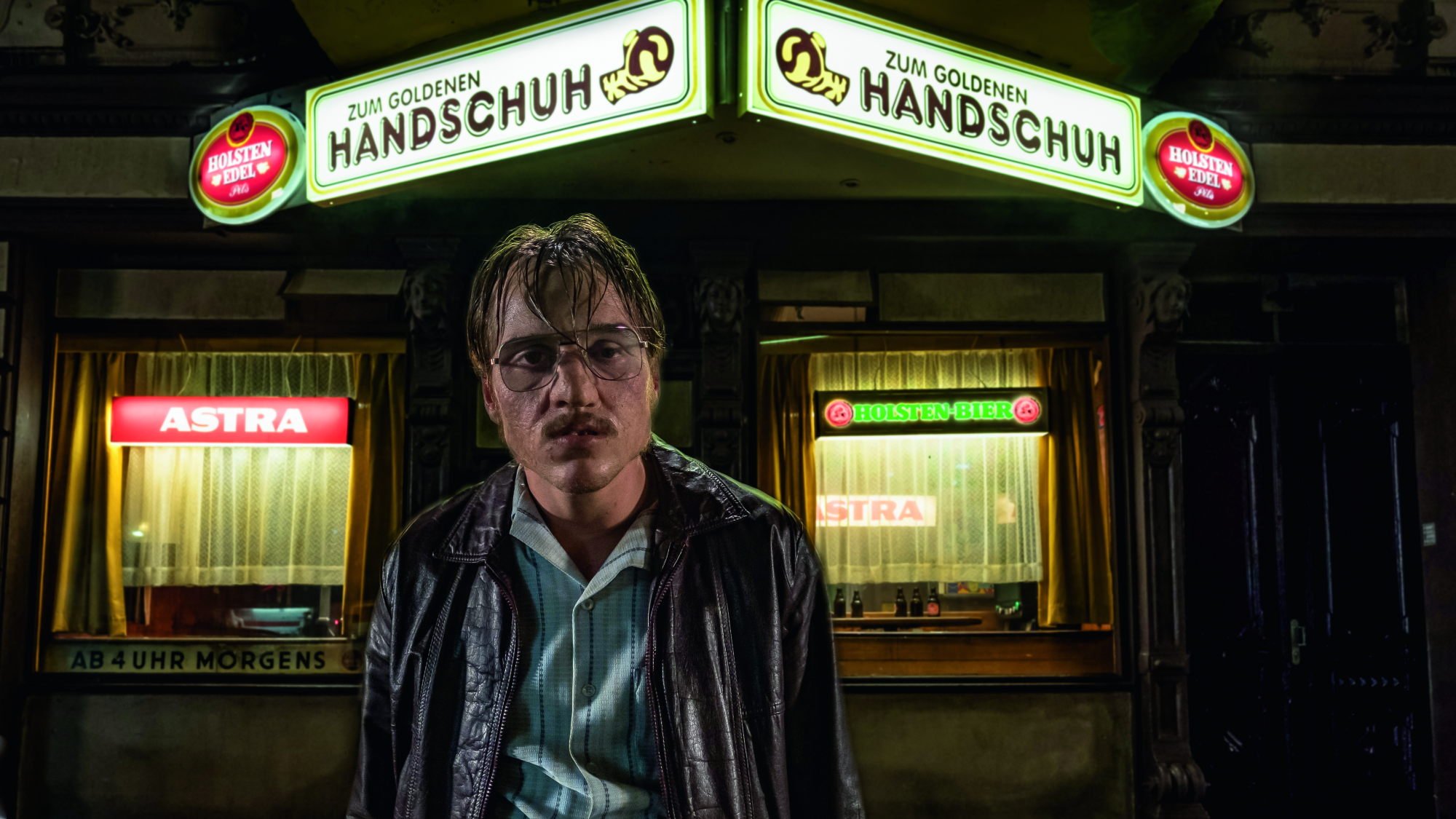 The Imagine Film Festival used to be called the Amsterdam Fantastic Film Festival, which itself grew out of the Night of Terror, a nightly marathon of horror movies. This origin is still seen in the abundance of horror films in the festival’s programme. This year, horror and gore fans were treated to some slasher classics like Maniac (1980), Maniac Cop (1988), and Eyes of a Stranger (1981), and of course many new horror films. Including Fatih Akin’s (Head-On (2004), In The Fade (2017)) much anticipated first foray into the genre: The Golden Glove (2019), and the Japanese hit zombie comedy One Cut of the Dead (2017), which has set a record at the Japanese box office for earning back its budget a thousand times over.

Deromanticizing the Archetype of the Serial Killer

The Golden Glove has raised quite some controversy in Germany since its premiere. Some critics even claimed this film, about Fritz Honka, a serial killer from Hamburg who killed a number of prostitutes in the seventies, should never have been made. Dutch critic Vincent Hoberg, who introduced the film at the festival on behalf of the cult magazine Schokkend Nieuws, mentioned how so many classics in the genre, like Psycho, Peeping Tom and Eyes without a Face, all films from 1960, were very controversial at their release but are now considered classics. So, who knows what the status of this film will be in a couple of years?

The Golden Glove lives up to its controversial status. The character of Honka alone could be classified as gore, as does his entire environment. Actor Jonas Dassler made quite a transformation into the very ugly Honka. He lives in a messy, smelly and dirty apartment where he tries to bring women, no matter how they look. He finds these women in a bar called The Golden Glove, near the famous Reeperbahn in the St. Pauli neighbourhood. A place frequented by sleazy individuals who drink a lot and listen to Schlager music, including old prostitutes, the homeless and other assorted lonesome individuals, such as an ex-nazi who wears an eyepatch and provides some funny one-liners and situations.

Honka desperately tries to ‘seduce’ drunk women to lure them into his apartment. His main aim is to have sex with them, but if things don’t go his way he becomes very aggressive, resulting in explicitly violent, clumsy killings. Although these scenes are gruesome, sometimes they’re also quite funny. This is exactly where the film becomes problematic. Director/writer Fatih Akin tries to deromanticize the archetype of the serial killer, to counter the kinds of films and television series that seem to glorify serial killers as very intelligent and charismatic men. Akin succeeds on the one hand, but also turns Honka into an almost opposite stereotype – which makes for quite a few good laughs, but also unnecessarily shows us a lot of violence and gore. Showing the clumsy violence in a funny matter, even if realistic, doesn’t deromanticize the killings as much as Akin perhaps intended.

The second act of the film, where Honka tries to stop drinking for a while, makes a better point and gives us more insight into the character of Honka. We see how he finds a job and tries really hard to connect with a female colleague and succeeds. We see a glimpse of the real human and caring Honka. He stops killing and really tries to make something of his life. Things inevitably get out of hand when he starts drinking again. Akin succeeds better at making this a social commentary about outsiders and the sadness of alcoholism than he does at making a realistic and deromanticizing film about a serial killer. Nevertheless, the atmosphere, funny situations and grim looks will stay with you for a while, making The Golden Glove at the very least interesting and at times even fun to watch, if you have the stomach for it. One Cut of the Dead

More comfortable and easier laughs were provided by One Cut of the Dead (2017) from Japan, awarded with the Silver Scream audience award at the end of the festival. A film that appears to start off as a sloppy zombie film but proves to be much more than that. The first part of the film is an impressive 37-minute one-take about a filmmaker, called Higurashi, who wants to make a zombie film in a deserted warehouse. When the cast and crew get attacked by ‘real’ zombies, it feels like a zombie film within a zombie film. A nice surprise but not necessarily brilliant. Especially since some of the takes and camera angles seem slightly off. Although the one-take is still impressive it doesn’t seem very well directed and for the genre fans out there, it is breaking a few ‘rules’ of the zombie genre. The zombies seem to do things they normally shouldn’t be able to, like handling weapons.

So at this point you may still feel you’re watching a mediocre film or feel like you’ve seen this type of thing before. Don’t make the mistake to leave the theatre or turn off your television if you don’t like it within those first 37 minutes. This film has a number of surprises up its sleeve, smartly playing with audience expectations and genre conventions. The second act goes a month back in time, when Higurashi is being recruited into making the film. He is asked to shoot it as one take, which will be broadcasted live to kick-off a new zombie TV-channel. This is followed by the casting and rehearsal process, featuring a lot of familiar faces from the first part of the film and the director’s background and family. The third act of the film surprises us again by showing the shooting of the first 37 minutes, what goes wrong on set and during preparation. It’s almost like a behind the scenes feature within the feature, culminating in a simply hilarious finale. One Cut of the Dead gives insight into the challenge of filming one take that’s being aired live, and all the improvisation and stress that comes with it. A very smart and inventive film, and arguably the funniest zombie film since Shaun of the Dead (2004).

This Imagine Film Festival article was published in April 2019