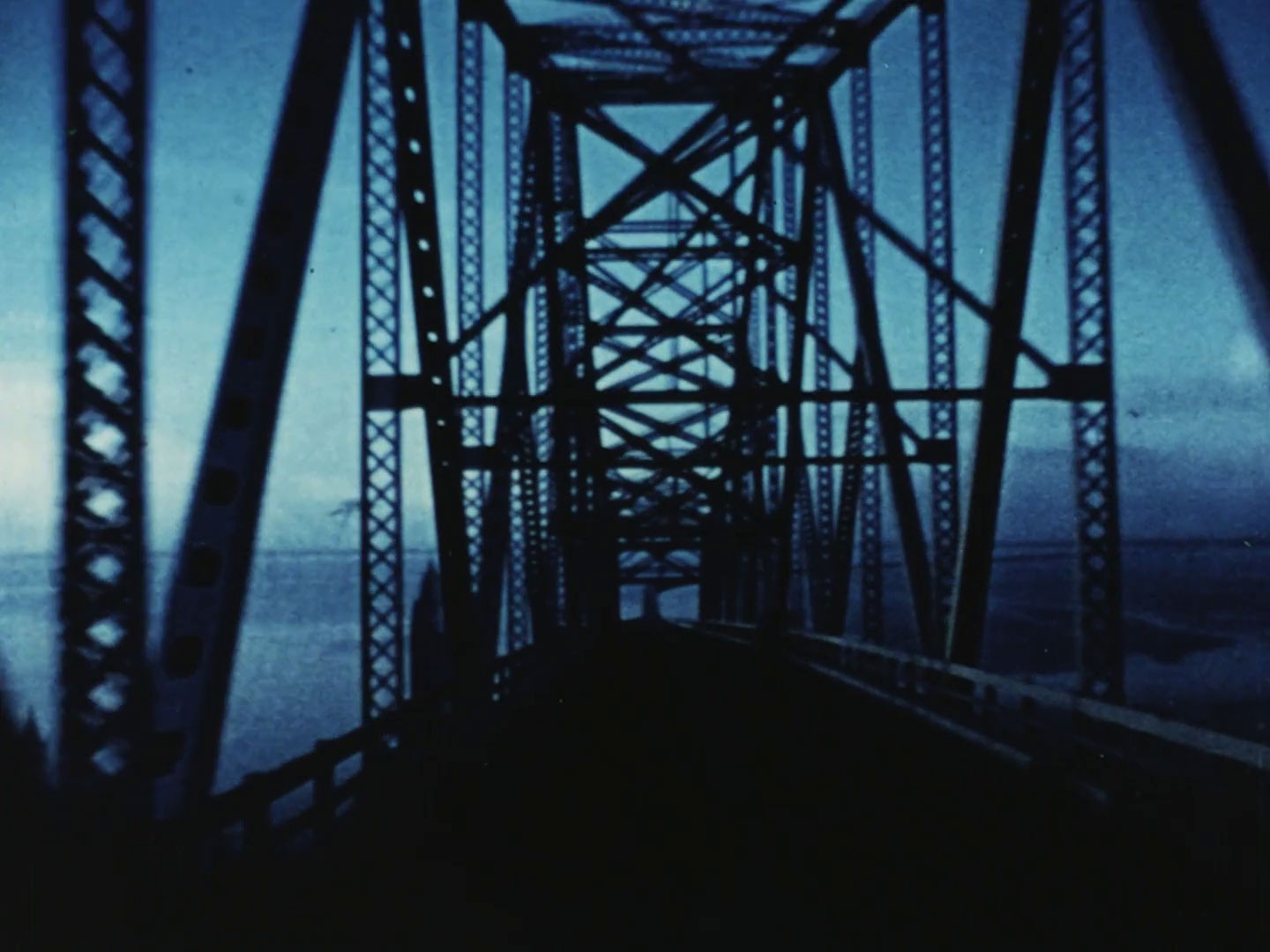 Townscapes and suspension bridges compete for the limelight in the four minute Bridges-Go-Round (1958). Director Shirley Clarke assembled the film from leftover footage of a project depicting the American lifestyle for the United States Pavilion during the 1958 World’s Fair in Brussels. A business opportunity led to an artistic one.

In this fantasia the wheels of the city spin perpetually indifferent to human experience where images dissolve into each other with fluid superimposition. Striking primary colours fill the screen while the camera swirls from down under the imposing nameless structures, as if alien entities occupy this realm. The urban constructions jostle around each other with a hallucinatory tinge, which especially menaces in the finale when a grand vista fills the background.

Yet simultaneously Bridges-Go-Round vibrates with vivacity. The otherworldliness of these urban landscapes give off a playful vibe thanks to whirling editing and dissolves, as if the city holds the potential of guiding the life lurking within its confines to novel creative dimensions. As such Bridges-Go-Round feels like a thorough exercise in psychogeography, that experiential study of the Lettrist International on the emotional effects of geographical space. Clarke as the director samples the footage into a swinging whole that comes across like the Lettrists ‘dérive’, a drift without destination to examine one’s reactions to their surroundings. Rather than New York harbour, the townscapes feel more like Constant’s New Babylon, an imaginary city designed to support people’s inclination to play.

The original soundtrack by Louis and Bebe Barron heightens the menacing side with spooky futuristic electronica. Due to rights issues, Teo Macero composed an alternative jazz score that emphasised the playful side of the film. Clarke liked them both and often screened Bridges-Go-Round back-to-back with the two soundtracks. Watched this way the experience heightens the idea of the city as a bustle holding endless possibilities with two diverging perspectives bordering at times on the hallucinatory. Since urbanisation redirects ecology to destructive avenues the film today poses a challenge on how to retain the suppleness of life contained within while escaping from its alien entities.

You can watch both versions back-to-back here:

This Framing the City Shorts article was published in September 2021