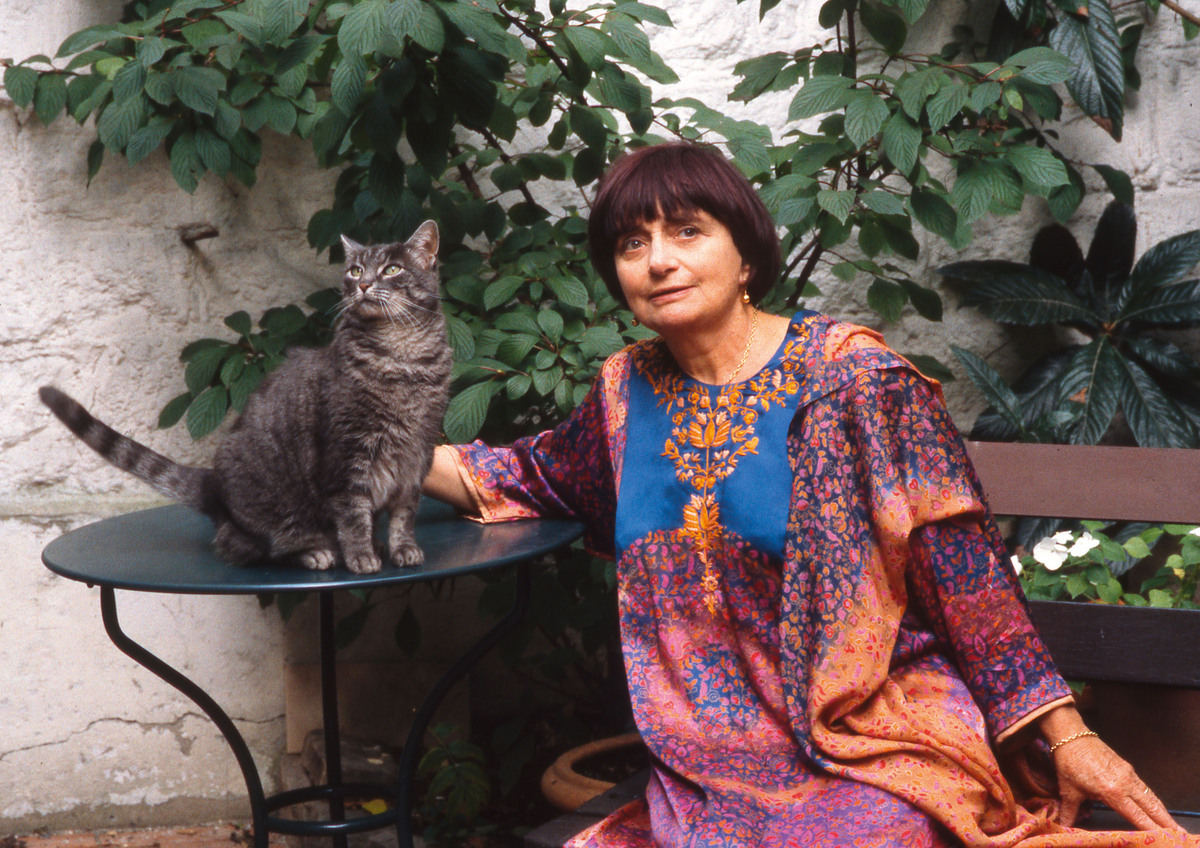 On March 29th, 2019 we lost one of the greatest filmmakers whom got their start during the French New Wave of the ’60s. Agnès Varda actually beat the wave by 4 or 5 years with her debut La Pointe Courte in 1955 and went on to make a wide array of films. She got to make 12 feature length films, 11 documentaries and a whole bunch of shorts up until her passing away. Her latest work is the upcoming documentary series Varda by Agnès, her latest in a body of self-portraits, which seems to be the best note to end a career on. To commemorate her incredible output, a handful of Frameland writers and contributors remember how the sparkling presence of Agnès Varda broadened their horizons, challenged their views or delighted them to no end. She will be greatly missed.

Agnes Varda. She stole my heart when I saw Faces Places (2017). It was so sweet how she listened to people’s personal stories and used them as a source of inspiration to perk up their neighbourhoods with huge portraits of its inhabitants. How this little woman spoke openly, with her soft French voice, about her eyes getting bad. How she was having fun with JR, the 33-years old artist with whom she cooperated during this road trip. How she somehow admitted she was getting old, but also wanted to express her young mind (with her characteristic half dyed coiffure for example).

After the release of this film, the 89-year old Varda talked about the three main concepts that shaped her life as an artist at TEDx Venice beach: inspiration, creation and sharing. The Belgian documentary director could get inspired by everything. From an exceptional meeting with a family member to an old heart-shaped potato. Ordinary things, everyday life. Nothing more, nothing less: just as it is. Like Varda herself.

At the beginning of the TEDx talk, she picks up a Tout(e) Varda DVD-box, a collection of all her films “and other things”. “Sixty years of creation, not even 4 pounds. It’s like nothing. You can have it, “ the unpretentious woman says. She didn’t think about retiring, since she still felt motivated and inspired. Fortunately, she was still able to present her latest film at the 2019 Berlinale, at the age of 90. May her perspective and way of living be a source of inspiration for everyone.

Vagabond (1985) is the first film Varda made with her own production company, Cine-Tamaris, which she founded in 1977. The French title, which can be translated as “Neither Lodgings Nor Law”, highlights the key theme of the film: the sacrifice of safety for the liberty of spirit. This liberty is reflected both in the dreamy, rambling shots of the French wine country in a cloudless winter, and the erratic roaming of the film’s protagonist, Mona. The film begins with the death of this woman in her early twenties, a close-up of her peaceful face. She had been a vagabond, wandering from farm to farm, picking up work where she could.

After the local police inquiries that follow her lonesome death, the film takes us back in time, wherein a series of inter-cut scenes we meet the people she crossed in winter, and we hear their testimonies about her character. Mona is at once deliciously anti-heroic and supremely unfeminine. Every time we start feeling pity for her, we see her lash out at those who are showing her concern, insulting them, seemingly taking for granted their kindness, or simply running away when she starts to dislike them. Varda’s lens stays steady and passive throughout these outbursts – the film feels a lot like a documentary because it shows us only what is, and never what could have been. Because it starts with the death of the heroine, the viewer is not caught up in the film’s story, but rather a witness, observing the testimonies of those who knew her.

The film has undoubtedly been an influence for other French directors: Mona is played by Sandrine Bonnard whose 2017 documentary Marianne Faithfull, Fleur D’âme, portrays another female trailblazer and Claire Simon, whose documentary “The Woods”, about the Parisian Bois de Vincennes, focuses on the vagabonds who have made it their home.

On the surface, Le Bonheur or Happiness (1965) tells the story of a classic love triangle. A married man falls in love with another woman and this greatly affects his relationship and family life once he admits his indiscretions. However, with Varda’s bright use of colour, her ingenious compositions, and natural way of directing it quickly becomes a gut-wrenching tale on the tolls that married life takes on the woman.

Varda uses a multitude of thoughtfully planned shots to make her case for the heavy burden that women carry throughout marriage. In the very opening shot, we see a single sunflower thriving on its own, which is quickly intercut with a group of sunflowers slowly wilting while a family of four walks past them in the background.

Her sharp criticism of marriage is also clearly seen as the women perform their household duties. In these touching compositions, we merely see a pair of hands either ironing a piece of children’s clothing, feeding a child, sewing, reading, cleaning, watering plants, etc. These beautiful compositions seem to suggest that a woman loses her own autonomy and identity the moment she steps into the role of wife and mother.

Varda herself described Le Bonheur as “a beautiful summer fruit with a worm inside”. Throughout the film, we see beautiful colours, with charming vignettes of family life, with a slow insidious frustration that builds until its icy conclusion.

At the end of the film, autumn is starting to replace summer, and similarly, the mother in the family has been replaced by a new woman. Some have read this as Varda’s reluctant acceptance about woman’s place in marriage, but I see this as rage. Made in 1965, Le Bonheur serves as a progressive and revolutionary critique about gender roles in marriage and the rest of the film gleams with Varda’s unique feminism. From a character casually breastfeeding in full view of the rest of the family, to the way she writes her female characters, Varda was a truly unique voice for women that will continue to echo in the film world for centuries to come.

Agnès Varda (right) and Sandrine Bonnard on the set of Vagabond.

Agnès Varda’s passing made me sadder than most filmmakers’ passing away of old age usually makes me. Not only was she a giant of cinema and a unique talent with a wonderful vision and voice, at 90 years old she was still very vital and making delightful and insightful films. I can’t wait to see her final film, Varda by Agnès. I wouldn’t be surprised if it moved me just as much as the first time I watched Corinne Marchand sing ‘Sans Toi’ in Cleo de 5 á 7 (1962), which made me cry when it was my introduction to Varda at an Agnès Varda & Jacques Demy retrospective ten years ago. Or move me as much as Sandrinne Bonnaire’s journey in Vagabond (1985), or her tributes to her late husband Jacques Demy in Jacquot de Nantes (1991) and The World of Jacques Demy (1995).

While at the same time it might delight me as much as Varda finding a potatoe in the shape of a heart in The Gleaners and I (2000), or rebuilding her office space on the beach in The Beaches of Agnès (2008). Varda had a knack for making the ordinary extraordinary, for observing small, simple and intimate moments of life, and seeing them for the marvel they are. We are blessed to that she leaves behind an incredible body of work consisting of a great variety of fiction features, documentaries and many shorts that deserve equal recognition (don’t miss Uncle Yanco (1967), Plaisir d’amour en Iran (1976) or 7p. cuis., s. de b., …à saisir (1984)), with a strong current of feminism running through most of her career.

In 2007, I was studying Literature in New Delhi, a city where not too many people I knew, walked. Reading Ulysses, where Bloom walked around Dublin, aimless walking seemed like such a very alien activity. Growing up in Indian cities where walking was always a means to an end, we never had the weather or the time to be, what I learnt people like Bloom were called, a flâneur.

Researching the flâneur figure for a term paper, I chanced upon a film called Cléo de 5 à 7 (1962) and watching it, in the darkness of my dingy dorm room in Delhi, changed everything I knew about films and what women do in them.

Cléo, the protagonist, had the whole city of Paris open up to her like an oyster: she walked, drank coffee, smoked, bought hats, visited a tarot card reader and befriended strangers. This blew my mind; women in films I watched, stayed home or went outdoors to work or dance among trees. Cléo was my introduction to a lot of things, but most of all, she opened up questions about women and their access to city spaces.

After I turned in my term paper, on the gender politics of flânerie in Guru Dutt’s Pyaasa and Agnès Varda’s Cléo de 5 à 7, my best friend and I took a very long walk in the sweltering heat of Delhi, and passed out from a near-heatstroke.

To cut a long story short, Agnès Varda taught me to walk.

Family history on film is a trope that isn’t uncommon in documentary. For some filmmakers, it’s a way of excavating moments that have been forgotten and for others a way of discussing experiences that were purposely shut away. Uncle Yanco (1967) feels so much different in comparison to those types of films about family, instead of revisiting we’re meeting Varda’s uncle as she is as well. He’s kind of a weird dude, living on a boathouse that looks ready to collapse but Varda took a liking to him, complete with pins having slogans like “I like Uncle Yanco, He is Greek, He is Great.” The first of her film’s made during her stay in California in the 60s, Uncle Yanco reminds me that family on film need not be this sombre encounter. Sometimes it can have a happy-go-lucky attitude without compromise. I’ll miss that attitude in her film’s….we need more of it