“We like eating a lot in Asia,” an Interview with Lorna Tee 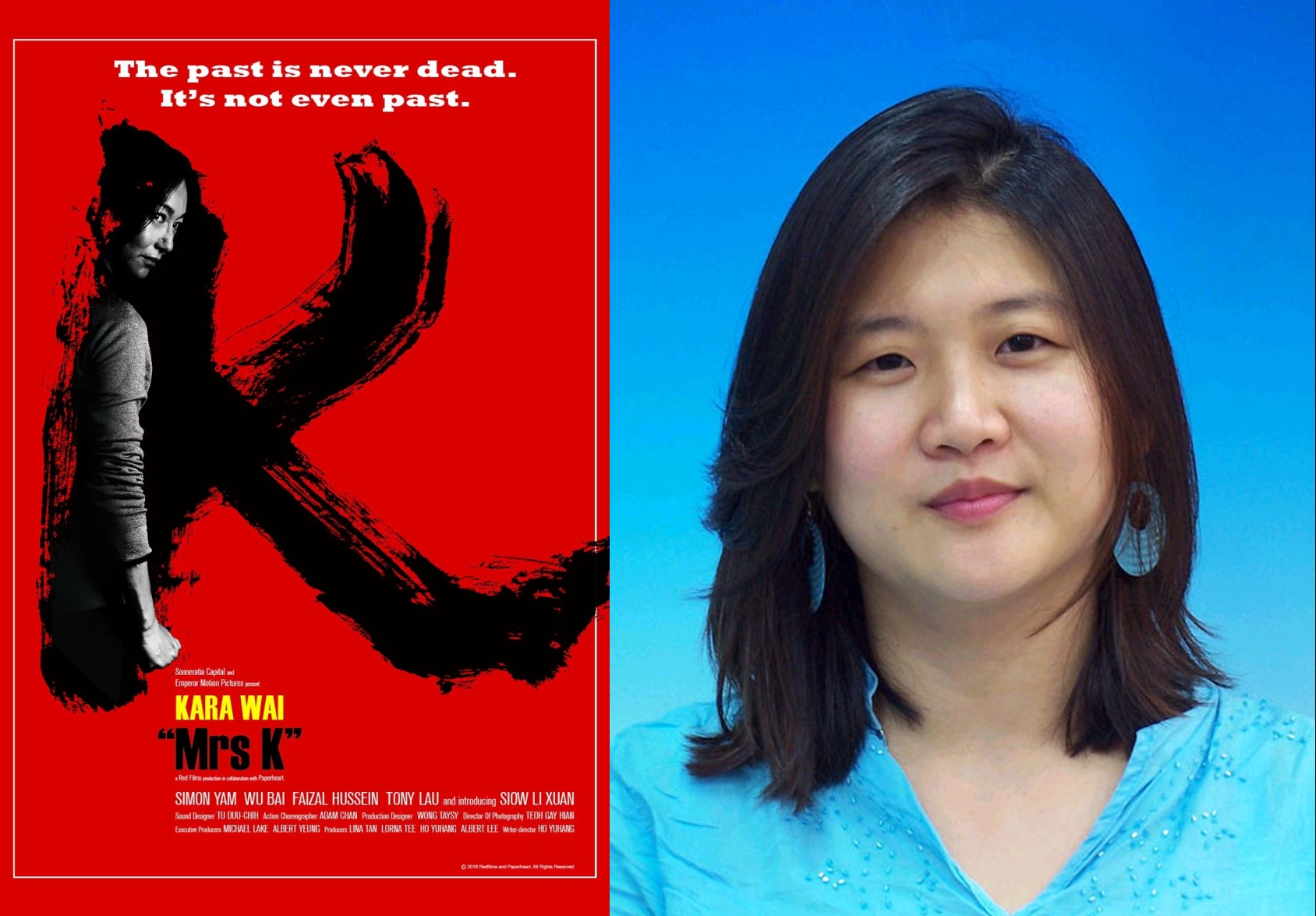 Frameland met up with Lorna Tee to talk about Mrs. K (2016), its star Kara Hui (sometimes spelled as Wai), its director Ho Yuhang, the connection between Asian film and food, censorship, and other subjects.

Lorna Tee is one of the producers of Mrs. K, directed by Ho Yuhang, on which she worked with him for the past five years. In that time, she also became the director of the CinemAsia Film Festival in Amsterdam, and founded the International Film Festival & Awards Macao. Last week, Frameland published an essay on Mrs. K and the gender role reversal within.

Frameland: How did Mrs. K come about?
Lorna Tee:
I’ve worked with the director on his past three films. We have a company together and always work together. After we worked with Kara Hui on his last film, At The End of Daybreak (2009), she won seven best actress awards for that film and her career was resurrected. Then she appeared in a film by Peter Chan, Dragon (2011), with Donnie Yen. Kara played Donnie Yen’s mother and she kicked his ass. And we said, okay, we have to do an action film with her as a lead, as the last action film she’s going to do because she’s in her fifties now. It’s not like she can do action films all her life.

We decided to write a film for her and work from the premise that she has a past catching up with her, and she has to do what she has to do to protect her family. It’s a simple premise, but we had a lot of fun making it even though it was quite tough. I think we went through 20 draft scripts. Casting took a year, including waiting for Simon Yam’s availability and convincing Wu Bai (the Taiwanese rock star who plays Kara Hui’s husband), who never really acts in films, to come and work with us. We were fortunate I knew him through mutual friends, and he agreed to read the script and was interested. Because it’s casting against type to cast a famous rock star as the husband of the star of the film. We also had fun casting the little girl and training her for the film. It’s her debut and she’s really good.

We’re very happy with the film even though it’s not a film that’ll become The Raid (2011) – because people now expect action films from South East Asia to be like The Raid, but I don’t know how to make films like that. Action all the way, from the get go to the end.

We had a lot fun making the film, even though it was really tough. Our set was flooded a few times. Kara got injured – she dislocated her shoulder at one point filming the fight scenes. There were a number of struggles. We had to fulfill certain things for the Malaysian government, we had to fulfill things for Hong Kong investors, so we had to manage all these different expectations, but in the end, we had fun.

F: Did Kara Hui do all of her own stunts?

LT: About 80 to 90%. Jumping up and down, all the running, the fighting in the sort of stall, at night when she came to get her daughter, she did all that herself. Now she says: no more after this! [laughs] She was quite badly hurt.

F: Usually this type of story (the criminal who’s past catches up with him, being forced to protect his new family from that past) is about a certain kind of macho man. Was the gender role reversal intentional or more of a by-product of the casting?

LT: It has a lot to do with when you cast a female lead. We think women can also be kick-ass and bad-ass in film. One of our starting points was that she cannot be a token female lead that you see in a lot of films. We wanted her to be the heart of the film and have everything revolve around her. She’s really strong but at the same time also really needs her husband and he brings her back from losing herself totally from the people they have become. He is a pillar of strength that she needs, even though he can’t really do action or shoot a gun. So, we didn’t purposefully go: “the female character should be this, and the male character should be that,” but just went with what felt natural for the characters as we were developing them.

We also play with the relationship between the daughter and her father and with her mother, which is very sweet but also different from each other. The scene with the fish bone is about family and the family working out how to deal with the weaknesses you have and overcoming them. We like eating a lot in Asia, so I think we always use eating as a metaphor for a lot of different things. [laughs]. You always get a bit hungry when watching Asian films.

F: You made three features and two shorts with Yuhang Ho. What is it about him that makes you want to work with him again and again?

LT: Sometimes you’re just thrown together and… I like his work, his first two films, and he’s a very loudmouthed character who knows his cinema really well. He can tell you a lot about cinema and talk to a lot of people about cinema. He knows a lot about films from America in the 60s and 70s. He met Scorsese and Scorsese was very impressed, and still sends him films to watch from his collection. But he’s not your typical film maker in a sense, he also studies philosophy. He doesn’t make films that are extreme – he’s not a gentle person but his films have a gentleness to them that I really like.

He works a lot from his emotions, with his relationships, with his mother also, there’s a lot of that in his films that I feel is nice to watch. We get along quite well. Sometimes things just happen. You meet people and you find a connection. And you want to work together. We find a connection and we have the same vision of what we’re trying to do. It’s the same with Edwin, an Indonesian director I’ve worked with, and another director from Hong Kong I’ve worked with. I don’t do conflict very well, so I prefer to find people that… we all have the same idea of what we want to do.

F: Was it different working together on this film?

LT: This one was a tougher film, because we’ve never done an action film per se. We had to do a bit more homework and research. We had an action crew from Hong Kong come in to help us choreograph and advise and everything. I think in terms of cinematography we could’ve worked with the cinematographer a bit more on storyboarding and how the action was shot, because some of the action scenes could’ve been done a bit better. But you learn every time you make a film, and next time we’ll do it better, if we make another action film. But I’m making something now that is a kind of thriller, an Indonesian thriller with a bit of action, directed by Edwin. It’s called Vengeance is Mine, All Others Pay Cash, which is quite fun. We’re working on the script now, based on a book of which the English translation will be published later this year.

F: How do Hong Kong filmmakers cope with making films in Hong Kong these days, with censorship of mainland China looming ever larger?

LT: It’s really tough for independent Hong Kong filmmakers. Especially with the backlash from certain quarters in Hong Kong and in China towards films like Ten Years. It’s really hard for the independent scene to try to carve out something. Because Hong Kong audiences want to see things that are anti-China, but if you do that you don’t get money to make your films in either Hong Kong or in China. It’s a situation that’s really hard for Hong Kong filmmakers, to find which direction to go in, what they have to say and how to find a balance.

Mrs. K is opening at Osaka Asian Film festival in March. It will screen at the Udine Far East Film Festival and the San Francisco International Film Festival in April. We’re waiting to see how it goes in China, whether or not we get a Chinese release – to see if censorship has anything to say about the film.

F: Why didn’t you screen Mrs. K at CinemAsia?

LT: I don’t feel comfortable screening my own films at a festival that I run. I feel that would be a conflict of interest. I think it would be a very nice film for CinemAsia but I didn’t feel comfortable about it. I didn’t want to. The programming team asked me about it but I felt it wouldn’t be right. Maybe later on at some point we can screen all the films that I’ve produced, but not now. We’ll see.

Mrs. K will be shown next at the Udine Far East Film Festival, which takes place from the 21st to the 29th of April, and at the Sidney Film Festival in June. Last week, Frameland published an essay about Mrs. K and the gender role reversal in the film.
This Interviews article was published in April 2017