“What city is this?” 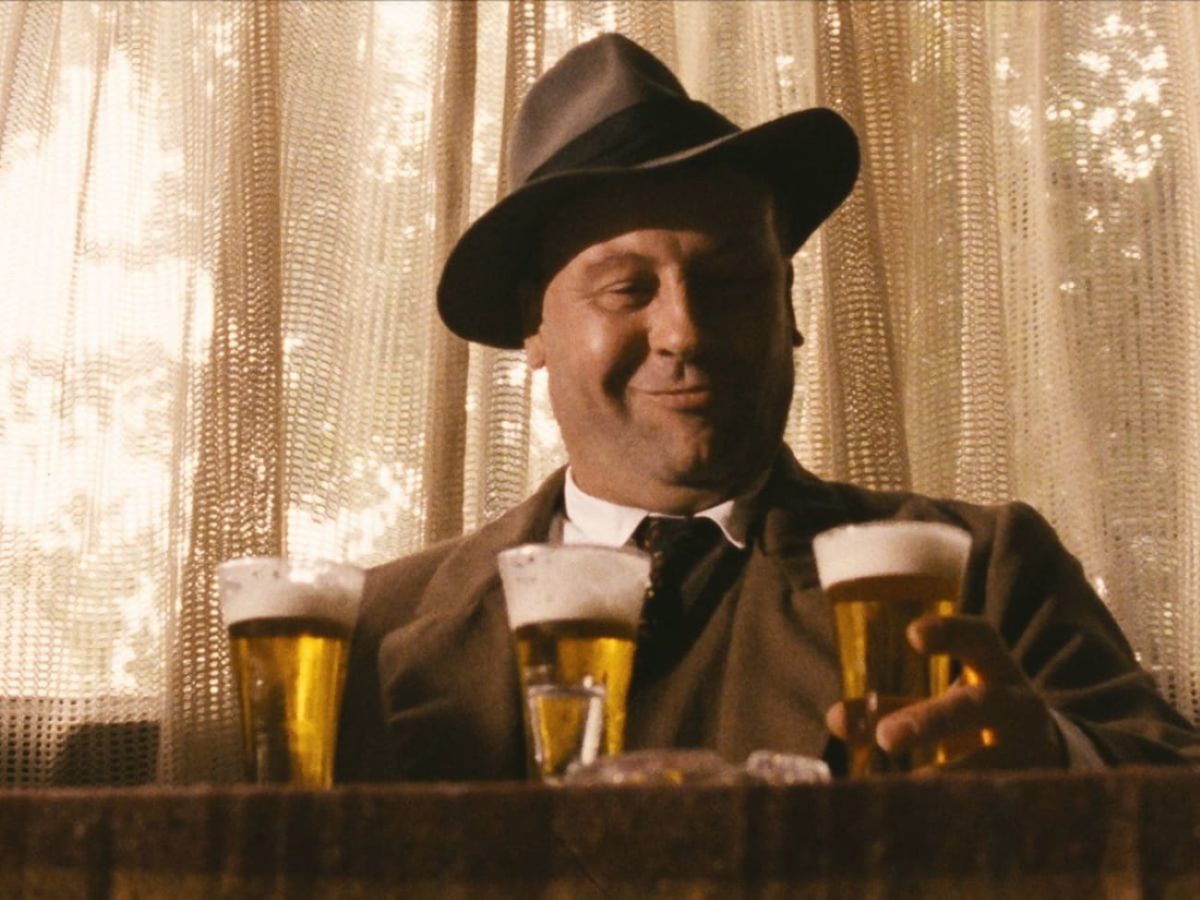 To limit Alfred Döblin’s 1929 novel Berlin Alexanderplatz to its plot would do the text and its intent no honour, for the book is only partially concerned with the life of its protagonist Franz Biberkopf. When after four years of incarceration this convict of uxoricide sets foot outside the Tegel prison facility, the highly institutionalized man steps into a new Berlin: an industrious city that has become overwhelmingly fast-paced, economically shaky and politically unstable. Döblin’s aim was to capture the changeableness of Biberkopf’s surroundings, through a modernist literary style that uses montage techniques to convey the multiplicity of life in the big city. He’s as interested in the struggles of Biberkopf as with the idea that he’s constantly surrounded by millions of people who are facing their own struggles in life.

If it weren’t for Rainer Werner Fassbinder, Berlin Alexanderplatz would surely be featured on every listicle about unadaptable literary classics. Döblin’s own crack at bringing his sprawling, associate meditation on Weimar Berlin to the silver screen would be one of the many reasons why: his screenplay for Phil Jutzi’s 1931 Berlin Alexanderplatz feels bogged down by the intricate plotting of the source text. Save for some moments of impressive documentary-like street photography, the straightforward adaptation feels more like a linear crime drama. It fails to evoke Döblin’s associative literary techniques that captured the conflicting lives of people in Berlin.

Only by making an adaptation that’s distinctly Fassbinder, the rebellious director of the New German Cinema managed to capture what the book feels like. There lies a beautiful paradox in his monumental television production of 1980 that we’ll have to examine more closely: Fassbinder’s Berlin Alexanderplatz is representative of the source text, exactly because it doesn’t want to closely resemble it. Now, it’s not my intent to discuss the varying degrees of faithfulness of the different Berlin Alexanderplatz adaptations – a rather pointless exercise. Instead, I’d like to examine how these adaptations have captured different versions of Berlin in particular, and how they reflect on Germany in general.

Here too, the Fassbinder paradox comes into play. In his expansive study on Rainer Werner Fassbinder, the late German film historian Thomas Elsaesser sees this paradox as something that’s typical of Fassbinder and the era of German film history that he was somehow representative of. He writes that Fassbinder “seemed the least obvious candidate for ‘representing Germany’, either in the sense that his films gave an image, a descriptive map or an inventory of post-war Germany by treating social and political questions; or in the sense that his films created fictional worlds in which Germans could or did recognize themselves.” And yet, as critic Wolfram Schutte, noted: “in his films, no nation recognized itself, though the nation is recognizable in and through the films.”

Elsaesser describes that, in many different ways, cinematically representing Germany after the Second World War was a double bind. Filmmakers not only had to navigate a film industry that was previously appropriated by the Nazi apparatus, but they also had to strike a difficult balance between artistry and commerce, ideological critique and personal sensibility, and between what we think of as ‘national’ and as ‘nationalist’. To complicate the matter even further, German directors also had to be aware of what part of Germany they would be representing: the West Germany of Thomas Mann or the East Germany of Bertolt Brecht. To represent something means to ‘speak on behalf of’ or to ‘construct a recognizable image of’. It’s safe to say that German directors were faced with the impossible task of striking a balance between the two.

Inspired by the Italian neorealists and French nouvelle vague, many German directors found a solution by taking their cameras out on the streets to film versions of life as they occurred. Following the Oberhausen Manifesto that declared “conventional cinema is dead,” early films of figureheads of the New German Cinema like Alexander Kluge (Yesterday Girl, 1966) and Edgar Reitz (Mahlzeiten, 1967) presented an externalized view of Germany, a cinema in which individualized struggles were contextualized by their surroundings. The introspective road movies of Wim Wenders and the expressionist adventures of Werner Herzog take this approach to its most extreme: these journeys illustrate the frustrating search for a sense of identity, community or belonging. Ultimately, through their portrayal of an indifferent landscape, films like Kings of the Road (1976) and Heart of Glass (1976) convey a sense of displacement and arrested development that seems impossible to overcome.

This vergangenheitsbewältigung manifests itself radically different within the work of Fassbinder. His worldview has no interest in topography. Landscapes don’t convey contradictory feelings; their awesome vistas are not granted to us. Instead, Fassbinder, a great admirer of German expressionism, Hollywood melodramas and avant-garde theatre, creates liminal spaces through which conflicting ideas and emotions are internalized. Most of the times – there are some instances of neorealist verisimilitude in his oeuvre – he emphasizes the artifice of the compartmentalized worlds he has created. One can only call them representative up to the point that they evoke the complicated feelings that arise out of collective history in the physical world.

This brings us to Fassbinder’s Berlin, a highly constructed place that only seems real in the mind of Franz Biberkopf (Günter Lamprecht). Here, exteriors mostly function as spaces that marginalize Biberkopf’s corporal presence. The imposing character is often forced to the background of the frame, while activities of everyday life take over the foreground. Although Biberkopf’s ordeals are the focus of Fassbinder’s series, it’s frequently highlighted that they’re but trivial ones in the vast scheme of all things. Also, quite literally, we rarely see the actual city: many of the exteriors were shot in Munich, where production was more manageable. Biberkopf’s warped ideas on society, politics, economy and individual relationships are mostly expressed in the spaces he most frequently inhabits: his house that’s often framed as a prison cell, subway stations that feel like political arenas and cafés that seem like breeding grounds for toxic masculine relationships.

What Fassbinder adds to Berlin Alexanderplatz is a (a)historical awareness that foreshadows where Biberkopf’s Berlin is headed. Phil Jutzi’s 1931 adaptation does acknowledge the presence of German stormtroopers but shies away from pinpointing the emergence of Nazi Germany. Fassbinder, however, tackles the rise of fascism heads-on and makes it an integral part of Biberkopf’s struggle. Taking on a job as a newspaper salesman comes along with the occupational hazard of cosplaying as a Nazi. Biberkopf, of course, sees no evil in this, which is exactly his shortcoming: he sees no evil in his own doing – the killing of his first lover – either. Fassbinder uses Biberkopf as a mirror image for the German psyche, a naïve man that throughout the series claims to want to do good. He just can’t help that he has become infatuated with the wrong people, most prominently manifested by psychopath gangster Reinhold (Gottfried John).

The epilogue is Fassbinder at his most daring: two hours of nightmarish and surrealist imagery that invoke Biberkopf’s afterlife. By combining the aesthetics of a prison cell, an abattoir and a 1980s Diskothek, Fassbinder finds an ahistorical approach to condense all of the ideas that preceded in the previous thirteen hours. It’s also the instance in which Fassbinder most explicitly imposes himself on Döblin’s source material: his rock n roll image, (back then) controversial queerness and avant-garde interests come together to represent his version of Berlin, a Berlin that’s still in the process of figuring out what happened in its past. This is linked to a thorough investigation in the morbid and sexually frustrated relationship between Franz and Reinhold that has been an implicit driving force all throughout Berlin Alexanderplatz.

The most recent rendition of Berlin Alexanderplatz also uses Biberkopf’s deadly attraction to evil to confront one of Germany’s historical wrongdoings. Burhan Qurbani’s 2020 Berlinale competition entry presents present-day Berlin as a highly gentrified space that deals with a different political and historical legacy. Here, Franz (Welket Bungué) doesn’t come to us as a convict, but as an undocumented immigrant from Guinea-Bissau. Qurbani uses his integration in the underworld of contemporary Berlin as a vehicle to address post-colonial issues like racism, imperialism, globalist capitalism and the ongoing refugee crisis. It’s mostly the drug dealing scenes set in Hasenheide park that manage to dissect the new hierarchy of Berlin’s social fabric by illustrating how the sub-Saharan Africans deal at one side of the park and the Arabs at the other side. “Hipsters,” Franz is told by an updated version of Reinhold (Albrecht Schuch) “pay double.”

This is one of the rare moments where we really perceive how Franz relates to his environment, and how that environment informs his dubious actions. For a film that tries to break down the role of the immigrant in contemporary society, it seems strangely restrained in showing how that society operates. And unlike Fassbinder, Qurbani isn’t that interested in capturing Franzis’ conflicted interiors either. Instead, he opts for a far removed voice-over narration that comments on the action like a disembodied Greek chorus. It gives the film an operatic scope, with a rather mechanical feel. And regardless of how often Qurbani tries to wind up these narrative devices, the machination, much like the city, rarely manages to come alive.


This Framing the City article was published in April 2020