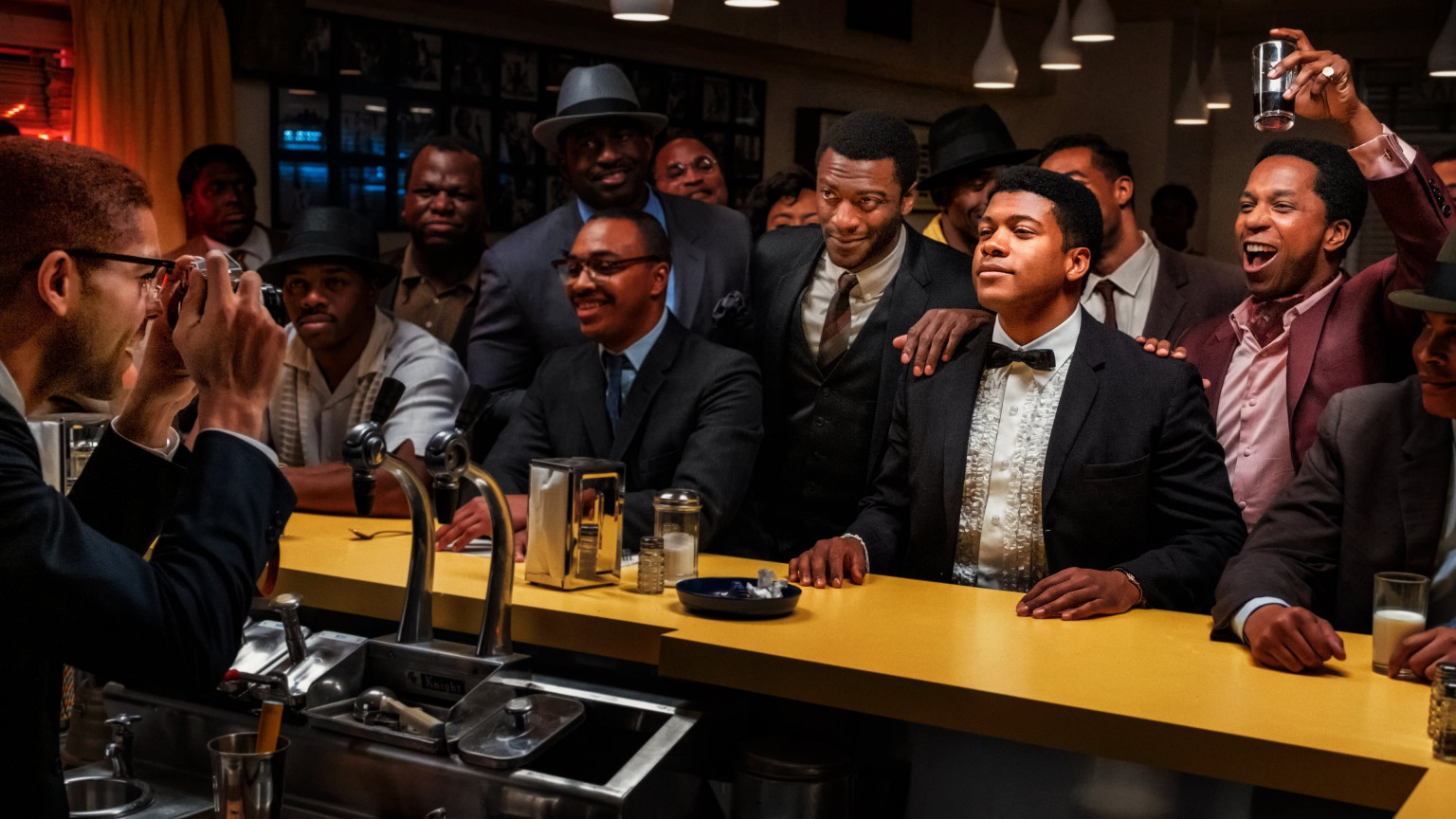 What does it mean for a woman to make a film, and what does that film look like?

Regina King’s One Night in Miami (2020) is essentially about four men, four institutions of Black American History: Cassius Clay/ Muhammad Ali, Sam Cooke, Jim Brown, and Malcolm X. Based on Kemp Powers’ play of the same name, the film is an imagined narrative of the historical night of 25 February 1964, when 22-year-old Cassius Clay defeated Sonny Liston in Miami, to win the world heavyweight boxing championship. He then met up with his three friends to celebrate and to announce to them that he would be converting to Islam and taking on the name, Muhammad Ali. The four men spend the night together, standing at the cusp of their respective turning points, while the FBI observes them. Malcolm X is about to quit the Nation of Islam, Cassius Clay is about to become Muhammad Ali, Jim Brown is about to launch his career as a Hollywood actor and Cooke is about to, for the first time, steer away from romantic ballads and sing A Change is Gonna Come, after he and his entourage get turned away from a whites-only motel in Louisiana. Unknown to everyone at that time, Malcolm X and Sam Cooke would be murdered within a year of this night.

The feminist writer Hélène Cixous has written extensively about écriture féminine, a feminist authorship that aims to reclaim the power that women have historically been denied, wherein they use their bodies to write themselves into the social fabric. Hysteria (from the Greek word hysterikos, meaning “of the womb, suffering in the womb”) thereby gets reclaimed as a rebellion undertaken by women writers. So what happens when the body of a woman writer is invisible within a text? What happens when someone like King doesn’t write from her womb but with her whole body, that stands as the site of culmination for centuries of history. Is it less womanly? Is the art not feminine or (not to conflate the two) feminist?

In One Night in Miami, King inserts herself, her gaze into a room where four men sit, fight, and eat vanilla ice cream. Malcolm X (Kingsley Ben-Adir) confronts Sam Cooke (Leslie Odom Jr.) and asks him if he was ashamed that a white man wrote the song “Blowin’ in the Wind” while he was busy crooning love songs. King frames the scene within her gaze, inserts herself within a history that is Black and fiery, but still very male. We don’t see her body but everything we see is through her eyes. She salvages these men from the uni-dimension history often reduces them to and presents them as men (flawed in their own capacities) who are friends, and also giants of modern Black history, each of them having played a big role in engineering watershed moments not just for Black people in America, but most people in the world.

In telling their story, their joys and frustrations, King not just celebrates her gaze as a woman but persists upon her rightful space as a storyteller who is a woman and Black. For her to choose a departure from a woman-led script (think Ladybird (2017), The Farewell (2019), Water (2005)—all formidable narratives) for her debut feature may not have been easy but it is a political act that chooses to defy the limitations within which we view women making films. As many reservations one may have with Kathryn Bigelow’s filmmaking, one is entitled to be outraged at questions like the one Marcia Froelke Coburn posed in Chicago Tribune: “What’s a nice woman like Bigelow doing making erotic, violent vampire movies?” Similarly one may ask, “What’s a nice woman like Regina King doing making films about men?” “Choosing to tell a story she wants to tell,” should be the logical answer.

When talking about what films we expect women to make, we often don’t bring up a Chinese-born filmmaker making a film about the American west. Chloé Zhao, who was born in Beijing, made Nomadland (2020) about Fern (played by the inimitable Frances McDormand) who lived in a mining town called Empire, Nevada whose ZIP code ceased to exist after the mine shut down. Fern then climbed onto a camper van and rode from place to place, moving from one job to the other, continually choosing to stay away from domesticity and familial rootedness. Zhao, like King, writes herself into a narrative where people like her are often made invisible. While most characters, without retirement savings or a home to return to, are American, mid-western and white, Zhao’s gaze casts a perspective that doesn’t make us question a woman who doesn’t choose domesticity even when she struggles to make ends meet.

Nomadland and Zhao make a feminist intervention within the ways the society sees family structures and the role of women within them. Against the context of the state failing its citizens (I wish the film explored this more), the film dares to imagine alternative social structures where women don’t have to be limited to positions of servility. Fern is a widow and has very little money but she doesn’t need to be saved. She is “houseless” and not “homeless”, as she insists. When Fern stands against America’s dream-like canyons, one is made aware of Fern’s loneliness but it isn’t gut-wrenching. It doesn’t make the audience pity her. It’s a loneliness that she has made peace with and Zhao forces us to do so, as well. There is grief but not of the kind that subsumes one’s whole life. As much as the film is about how America fails its seniors (especially the women), it also celebrates the freedom Fern finds as she adapts and perseveres.

Both One Night in Miami and Nomadland played at the Toronto International Film Festival earlier this year and through their absences and presences, and by the gazes that frame their stories, both these films strive to redefine the ways we define women in cinema and the women making them. Both King and Zhao have visions that are different from one another, but united in the way they strive to carve niches within spaces that have either been denied or left unexplored. It doesn’t matter if these women are “nice”, but one is thankful that they’re making the movie they want to make.

This Toronto International Film Festival article was published in November 2020